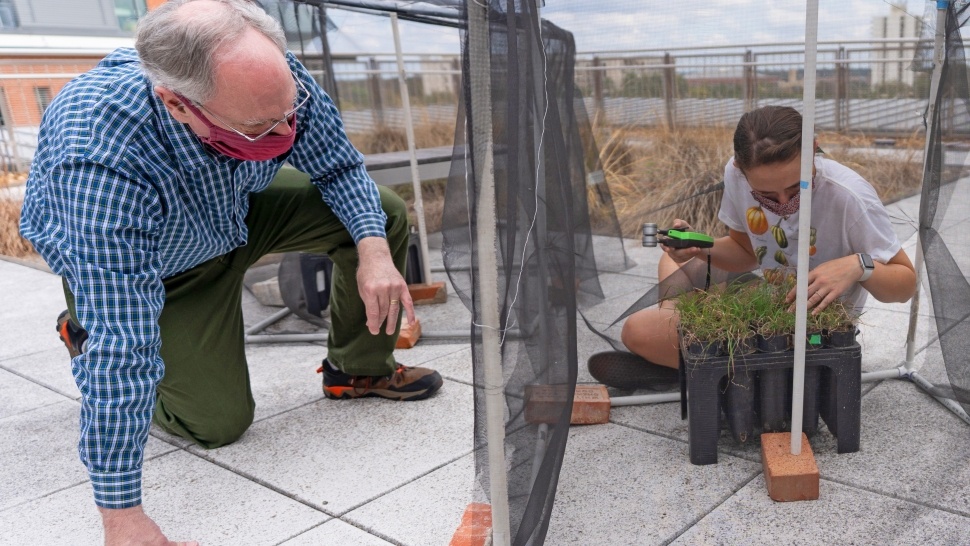 As Grace Hanshaw ’22 struggled to operate some laboratory equipment and software, she asked her lab mentor, James Shinkle, Ph.D., chair and professor of biology, for help. Together, they huddled over a laptop trying to figure out the issue.

It seemed a common sight for students participating in Trinity’s summer undergraduate research program. Except, Hanshaw and Shinkle were standing in a Whataburger parking lot in Schulenberg, Texas—the halfway point between Trinity’s campus in San Antonio and Hanshaw’s home in The Woodlands—rather than a lab on campus.

What was originally a one minute walk from Shinkle’s office to his lab to help students such as  Hanshaw had turned into a 90 minute drive. Due to COVID-19, Hanshaw was conducting her summer undergraduate research remotely. She and Shinkle met at that Whataburger parking lot to troubleshoot, a usual part of the scientific process during a summer that was anything but normal.

When in the midst of a research project, Shinkle prefers to take things one step at a time. "I've always been pretty ad hoc and 'What do you need?'” he says.

So, when Hanshaw received an email informing her that her Joullian Summer Undergraduate Research Fellowship (SURF) would need to be conducted from home, she jumped to a conclusion. Shinkle did not.

“I thought that was it, and we couldn't do it,” Hanshaw recalls. “I was shocked when [Shinkle] said, ‘We could probably figure something out.’”

And they did. Hanshaw and Shinkle began adjusting their plan for the summer by looking for possible field sites near her home before they realized Hanshaw’s backyard fit the exact requirements they were looking for. Soon, the other details of their project fell into place.

They built a makeshift greenhouse out of PVC pipe and plastic and transported lab equipment so Hanshaw could grow, collect, and process her own plant samples at home. The equipment included a chlorophyll meter, a spectrophotometer, and a reflectance meter loaned from biology professor Troy Murphy’s lab that sat on Hanshaw’s dining table. Shinkle also helped grow grasses in Trinity’s greenhouse and transported them to Hanshaw as necessary, driving just over 1,700 miles total. 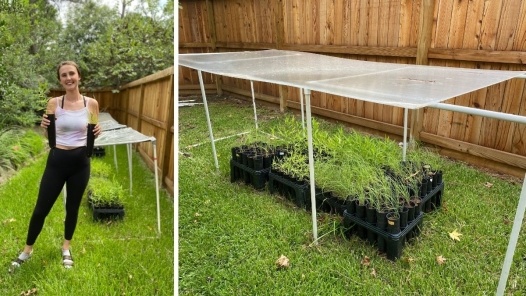 Shinkle, a plant physiologist, has devoted his career to studying how ultraviolet (UV) radiation affects the physiology of many species of plants. UV radiation induces a stress response in plants, as it causes gene mutations that can harm the plant. In response to UV exposure, plants produce a variety of UV absorbing pigments to help minimize the damage, and this redirection of resources thus inhibits the plants’ growth. In other words, certain parts of sunlight can actually stunt a plant’s growth, rather than help it.

In the name of experimentation, Shinkle introduced a third kind of UV exclusion filter for Hanshaw’s project. Hanshaw worked with inland sea oats and sideoats grama, placing them under three different filters that exclude different wavelengths of UV light: one that lets all UV wavelengths through, one that excludes all UV-B, and one that excludes only short-length UV-B. After two weeks of treatment, she examined leaf absorbance, reflectance, and chlorophyll and flavonoid levels in the grasses to determine the effect of UV exposure.

This decision actually alleviated some of the supposed risk of moving the project to Hanshaw’s backyard, as Shinkle was expecting informative rather than publishable data from the summer anyway.

This past summer wasn’t the first time Shinkle had to quickly reevaluate and pivot his initial plan for summer research.

Two years earlier, he and his summer research students planned to study how different locations—and the possibly varying levels of UV exposure in each location—affect plant growth and physiology. Differences in location can include differences in elevation, weather, and air pollution levels, all factors that affect the amount of UV a plant receives.

Shinkle and his students planned to grow sideoats grama, a native Texas grass, and place it at local field sites to measure the effects of UV exposure and resulting stress response in the plants. But all that planning didn’t make a difference: The grasses they had planned to place at local field sites refused to germinate in Trinity’s greenhouse. There were no plants for Shinkle and his students to experiment on—or so it seemed.

“I was panicking,” Shinkle says. “So we surveyed the campus to see if there was anything promising there. And then we saw the Green Roof." 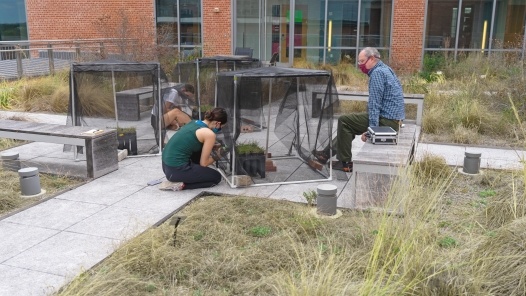 James Shinkle oversees two undergraduate researchers taking samples on the Green Roof of the Center for the Sciences and Innovation.

Shinkle and his students used the plants on the Green Roof, located on the roof of the Center for the Sciences and Innovation, to collect data (with permission, of course!). Through this unexpected experiment, they found that inland sea oats, a native Texas grass grown on the Green Roof, does respond to UV and could serve as a model species in their studies. Shinkle has included this grass in his research ever since.

Eventually, Shinkle and his students were able to get grasses to germinate, which the team then took to field sites. However, Shinkle’s quick thinking saved the summer and even offered helpful findings in the project.

"That was the first adventure with having to come up with a different way to do what we want to do. We had to get data from somewhere, and there were plants [on Trinity’s Green Roof]," Shinkle says. "It was my first case of, 'Let's find another way to do this experiment that involves using a different location.’"

Despite CSI being devoid of students this past summer, Shinkle’s students were at the forefront of his mind.

“From my point of view, what I did miss is the sort of day to day troubleshooting,” Shinkle says. “Some of the times when I'd wander into the lab, it wasn't because [a student] needed help. It was because I just wanted to know what was going on.”

Aside from helping Hanshaw with her research, Shinkle spent some time venturing to nearby field sites to collect solar data of his own. Perhaps most importantly, however, he was hard at work preparing his lab for student use during the Fall 2020 semester.

"I was getting other things up and running to hand off to other students,” he says. “I took stock of where [other projects] were left off, and I was doing backfilling for the next time we could have students."

And that hard work paid off. Shinkle reintroduced two unfinished projects to his lab and found students to start investigating them. In addition to Hanshaw’s project, he also has students working on research projects about how guard cells in Arabidopsis—small flowering plants related to cabbage and mustard—respond to UV and how UV exposure affects the growth of cucumbers. 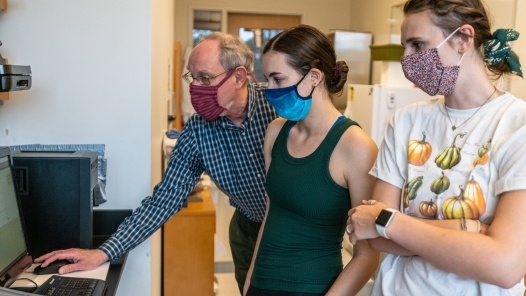 James Shinkle examines leaf pigment graphs with two research students in the Center for the Sciences and Innovation.

For now, Shinkle and his students are back in the lab, collecting data and working on their projects. Things are looking more normal as Hanshaw and his other students process samples in the lab rather than at their dining room tables. Still, Shinkle is ready to adapt his research plan when the next storm—or pandemic—knocks it off-course.

If you ask Shinkle how he’s managed to keep his lab running successfully through uncertain times, he’ll tell you it’s because he’s willing to take chances. “If you're not in a hurry and you just want to figure out the best way to do something, you just have to try it," he says. “Science can be forgiving sometimes.” 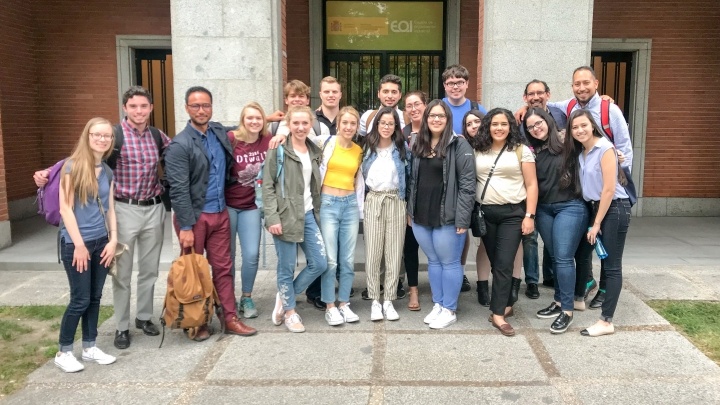 Thursday, October 13, 2022
What better place to put your Spanish language skills to the test than at a…
Faculty 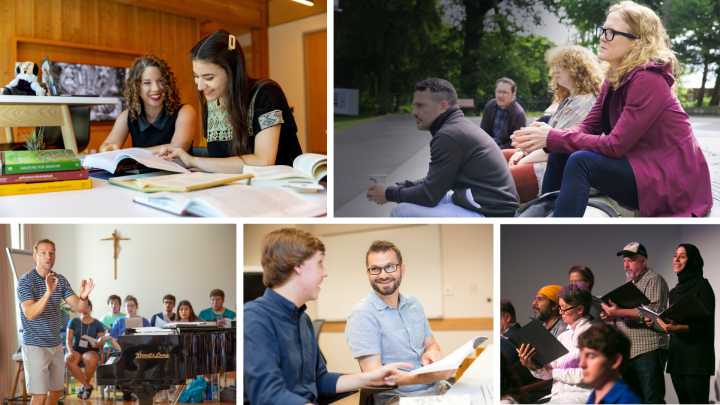 Tuesday, October 11, 2022
Since 2017, Trinity University's Humanities Collective has advocated for the…
Faculty
The Trinity Story 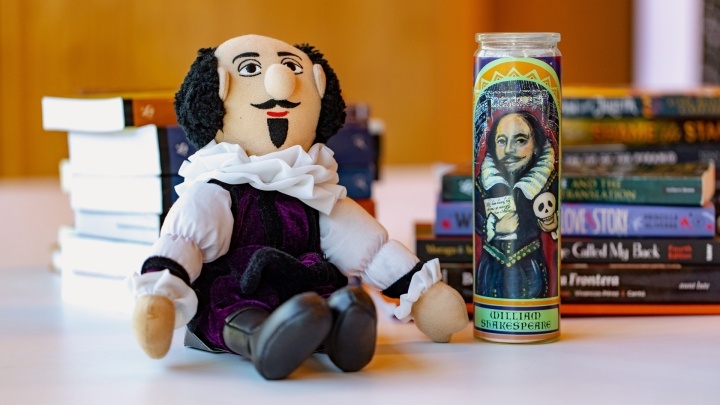 Monday, October 10, 2022
There have been times in the life of Paloma Díaz-Minshew ’24 when she’s felt…
Students
Faculty