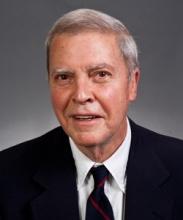 Born in Wichita Falls, Texas, Kownslar was visited by former Trinity president James Laurie, who often traveled around Texas to recruit students. He received his bachelor’s and master’s degrees in history from Trinity, then received a doctorate in the subject at Carnegie-Mellon University. He joined the Trinity faculty in 1971.

“Allan found his students to be endlessly interesting,” says his wife Marguerite. “The father of two sons, Allan was sympathetic with those who flailed around, trying to find their academic footing, and the lonely ones who were far from home and struggling to make friends.

“He designed his courses to encourage students to ask the right questions and then try to find their own answers,” she continues. “For years, his former students, some of them now old enough to be retired, wrote him fan letters, telling him that they had stolen many of his teaching ideas to use in whatever work they were currently engaged in. Allan took great satisfaction in those letters.

Alongside teaching (especially Texas history, his favorite subject), Kownslar especially enjoyed researching and writing. Kownslar once complained to a textbook salesman that the available textbooks were insufficient for his students' needs. The salesman replied that if Allan didn't like the current textbooks, perhaps he should write his own. And so he did. Over the next half century, Kownslar was the author, co-author, or editor of 25 history books, the last one published in January 2020.

Marguerite says that Kownslar was deeply influenced by Trinity faculty during his time as a student. She specifically cites three professors Kownslar met during his freshman year: Frances Hendricks, Don Everett, and Robert Hunter.

Everett offered Kownslar the position with the history department, and from there, Kownslar found good friends among the Trinity faculty. Professor Terry Smart phoned Kownslar to welcome him to the faculty before he and Marguerite arrived in town, and from there a lifelong friendship blossomed.

Kownslar was a member of several professional organizations, and he ran workshops for history teachers all over the United States and in Department of Defense Schools in Europe. As he grew older, he lectured at Elder Hostels in San Antonio and eventually applied his research skills to his own family, writing an enormous genealogical history in which there was a suspiciously large number of ancestors of royal blood.

At Kownslar’s request, there will be no funeral or memorial service.