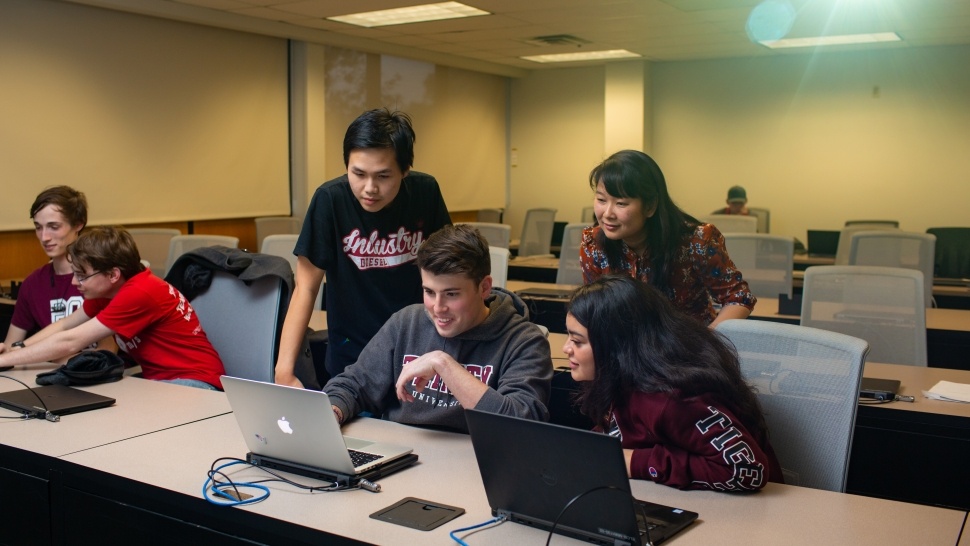 "Students in my upper-division classes werenít retaining nearly as much from their lower level courses as I thought they should have been," Lewis says, grimacing wryly. "Which was depressing, because I was the one teaching their lower-level courses."

What had gone wrong? What wasn't sticking? 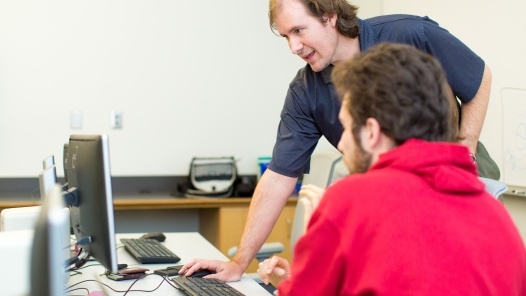 Mark Lewis '96 assists a computer science student during a hands-on lesson in class. Lewis uses the flipped classroom model to encourage more engagement with coding and programming during classroom hours.

“I needed a way for them to be doing more: applying what they were learning,” Lewis explains. “I needed my students to spend more class time programming, engaging with the language that is computer code, and less time listening to me talk.”

So, Lewis became one of many Trinity faculty to “flip” his classroom. No more 50-minute lectures, coupled with post-class homework. Instead, Lewis started filming small, condensed lectures—imagine miniature TED Talks—for his students to absorb before class, so they could spend class time on interactive, engaging activities.

“The first few classes I tried to flip, it was an abysmal failure,” Lewis says. “For the flipped model to work, your students have to commit to spending time learning outside of class, and not everyone was watching the material.”

But with a few tweaks, lessons learned, and best practices applied, Lewis eventually cracked the code for the ideal flipped classroom. Now, before a semester starts, Lewis films about 25-30 instructional lectures, typically less than 10 minutes long, for his students to watch in lieu of a textbook reading assignment. Before each class, students are digitally quizzed on the material to hold them accountable. In class, pupils are given a chance to ask questions, then the group launches into actual coding.

“I do feel, with students that have had a flipped classroom, if you see them three or four semesters later, they’re now having that better retention,” Lewis says. “That helps me, that helps other professors, it helps everyone when students can jump right into new material.”

It’s a model that several other Trinity faculty have reached, either independently or through collaboration, says classical studies professor Thomas Jenkins. Jenkins also serves as director of the Collaborative of Learning and Teaching, Trinity’s center dedicated to the intersection of pedagogy, technology, and professional development.

Through the Collaborative, Jenkins has worked with professors to flip classrooms across campus. This is a “nationwide and even globalwide impulse,” Jenkins says, where schools are moving away from a model of “75-minute lectures in class plus homework outside of it,” and towards disseminating smaller, “chunked amounts” of material online, and spending class time in “more engaging activities.”

“There’s a magical moment when 25 people in a classroom don’t have to concentrate all their attention on the one person at the head of the class,” Jenkins says. “The flipped classroom is one that hits the ground running. You’ve already pondered the material before coming to class, so now it’s already germinating; it’s already in your mind. Now, you can engage with your classmates and your professor.” 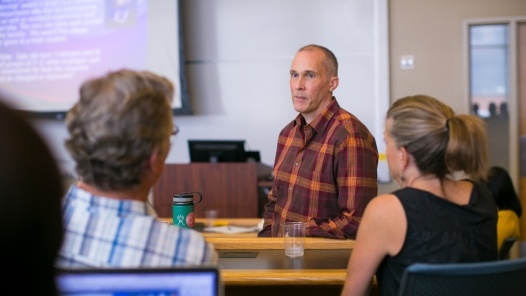 Thomas Jenkins leads a discussion among faculty in the Collaborative.

But flipping takes time, Jenkins cautions. The professor needs to present the content effectively, through online-focused content, and that means hours upon hours of creating and filming this material either in a specialized studio at Trinity’s Coates Library or by using mobile recording equipment from the comfort of their own office.

To support this initiative, Jenkins says Trinity has a number of development grants, as well as institutional support and best-practices advice for professors eager to give this technique a try. Ultimately, he notes, the flipping process represents an investment in the entire student body.

“This is the power of the flipped classroom,” Jenkins says. “If you do it right, it creates a ‘scaffold’ on which students can climb their way to the top of the material, before they even get to class. And this makes the class time more energetic, more interactive, and ultimately more successful for student learning.”

Mathematics professor Hoa Nguyen can speak to this increase in energy firsthand.

“If my class just sits there for 75 minutes and takes notes, some of the students will fall asleep, some of them will just listen through one ear and the material goes out the other—they forget everything,” Nguyen says. “But when you make class more interactive, students who were just passively sitting there, listening to my lecture, now they’re more prepared. Part of that is because they have a quiz. Now, they’ve come to class having watched an outside video, so I can ask relevant questions to that material. So I’m not just talking all the time, and the students can get involved and share whether they understand the concept or not.”

Nguyen also emphasizes the power of group work in a flipped classroom. In her mathematical modeling course, her students go off-template, working together to build and understand computer code from the very beginning of the coding process.
Since this is happening in class, right in front of her, Nguyen’s role shifts from lecturer to tutor, which means more opportunities for hands-on instruction. And with that, she says, can come some additional work for faculty.

“There’s a lot of unpredictable factors to teaching this way,” Nguyen says. “In the traditional method, you teach through a lecture, you take notes, and that’s it, right? Hardly anyone asks questions. But now anything can come up: if someone’s code isn’t working, I have to sit down with them to see what happened. It may be a small issue, it may be something harder to debug, or even something I’ve never encountered before. It can be tricky.”

But Trinity hangs its hat on being a safe place for students to fail. For professors like Nguyen, this type of failure can be a powerful teaching tool. “I think it’s better this way—I can walk around to the students that may have an issue, so we can debug together,” Nguyen explains. “But it’s good for students to see that solving a practical problem is not an easy thing to do. This struggle, that’s good. It works for me.”

While flipped classrooms are working wonders for STEM fields like math and computer science, religion professor Randall Nadeau says the flipped method has a special place with the humanities, too.

“‘Flipping’ has always been the vision of the ‘ideal’ humanities classroom,” Nadeau says. “Our students aren’t just listening and reading—they’re speaking, writing, sharing the knowledge they’ve gained. They are learning right in front of you.”

Nadeau implemented this practice into his “Introduction to Asian Religions” course three years ago. This is Nadeau’s “staple” course, and one he’s taught every semester he’s been at Trinity for the past 25 years. Nadeau says he’s always searched for ways to continue tweaking and adjusting how his students absorb the material.

In the past, Nadeau would spend his 50 minute class with a 40-minute lecture, with time built in for students to ask questions, but still “very much focused on me talking” to the classroom, he says. But now, Nadeau condenses his 40-minute lecture into a series of short videos and PowerPoint recordings, all spread out over 30 class periods, which students are responsible for watching before class. To hold students accountable, Nadeau also holds short, five-minute quizzes on the material at the beginning of class, similar to Lewis and Nguyen.

“This was a big change for me, but it’s definitely worth the tradeoff,” Nadeau says. “Students are now coming to class having already seen and heard what I used to do in the lecture, so I can do a lot more in class with discussion and interactive exercises.”
These exercises include surveys, questionnaires, short texts, small group discussion on controversial questions, and other interactive material that students can react to in real-time.

And while this technique might also work on a classroom scaled to the hundreds at a mammoth state university, Nadeau poses, Trinity’s intimate setting—and 9:1 student-faculty ratio—provides one key advantage. 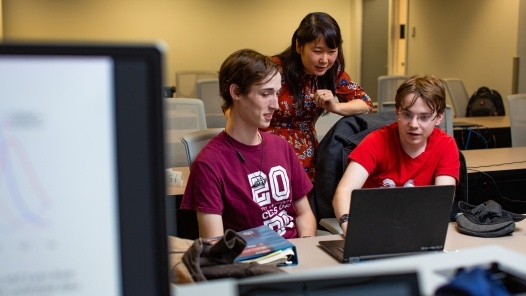 Hoa Nguyen (center) works with students during a math modeling course. Nguyen designed this course specifically to focus on group work during class time, where students work together to learn and develop mathematical computer code.

“I have my groups of four-to-five students actually report back to the whole class,” Nadeau says. “This is possible with 10, 15, even 30 students, but it might not translate to a class of 200. And at Trinity, you’re not getting a class with more than 30 students, so we can do this kind of thing more effectively.”

And several pedagogical studies he’s read the past few years, Nadeau notes, have linked this type of group engagement to higher knowledge retention.

“Having that base of knowledge before starting discussion is really what drives the quality of discussion,” Nadeau says. “And if I’ve learned anything about education over the last several years, it’s that the more things students can do actively, the more they will learn.”

Despite these glowing reviews of the flipped model thus far, Lewis will admit that the method might not be for every classroom, professor, or student. The true irony, Lewis explains, is that when he himself was an undergrad, he would have hated the flipped classroom.

“I wanted everything spoon fed to me through a lecture and through the textbook,” Lewis laughs. “So I’m quite certain ‘me as a student’ would have hated ‘me as a professor.’”

But Lewis also cautions that higher education is changing, especially for fields such as computer science. “Computers are taking over the world,” he notes, and new classroom material created by constantly-changing technology can be overwhelming for a conventional curriculum to encompass entirely.

“So what I’d say to ‘Mark Lewis, student’ is that our degree, today, is not the same as it was when I graduated. Computers do so much more. So we have to prepare our students for things that I couldn’t even have imagined being relevant back when I graduated,” Lewis says. “And our department can’t just keep adding courses. We have to work to make our classes more effective, and that’s where the flipped model has the most impact.”