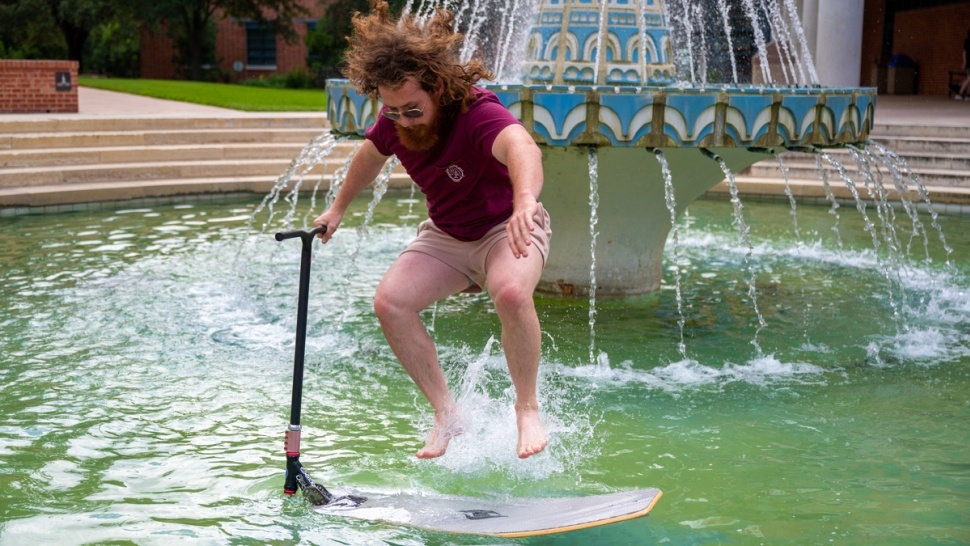 After a century of innovation, the world of watersports has dried up a bit, says Trinity finance major Carson Byrd ’24.

Byrd, along with teammates Ryan Arnold ’24, Cannon Starcke ’24, and Alec “AJ” Townsend ’24, have launched Wakescoot, a startup that’s aiming to bring scooters to the water. Starcke, a marketing major, says he’s excited about the new possibilities of this combo. “Water sports have always been a big fun party, where everyone’s out on the water, and the more the merrier,” he says. “So to give people new opportunities to get out on the water, to combine that with  scooters, a sport that they already love, that really makes water sports whole.” 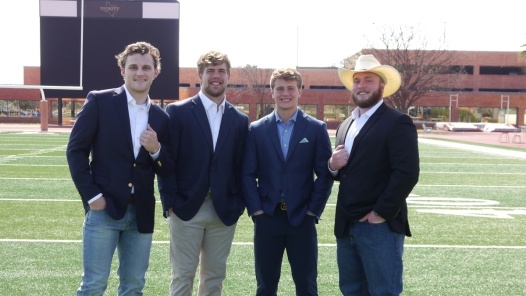 This quartet initially met as members of Trinity’s football team, where they all discovered they had a mutual interest in entrepreneurship. After taking a class together in fall 2020 and creating a rough concept of what would become Wakescoot as part of a group project, the team decided their idea was good enough to become a real business.

The group entered Wakescoot into Trinity’s Stumberg Venture Competition, moving past the prelims in the spring 2021 semester to the upcoming fall finals, with a $25,000 grand prize at stake. But before that happens, Wakescoot and the other four finalists get to work through the accelerator phase of the competition.

In the accelerator, the group gets vital resources such as housing, seed money, salaries for employees, mentorship, and crash courses in business essentials, all provided by Trinity’s entrepreneurship department.

The product might be exactly what it sounds like: a scooter combined with a wakeboard. But moving from that concept to a working prototype isn’t that simple. Using funds from the accelerator, the group added Andrew Koob ’23 as an engineer and designer. 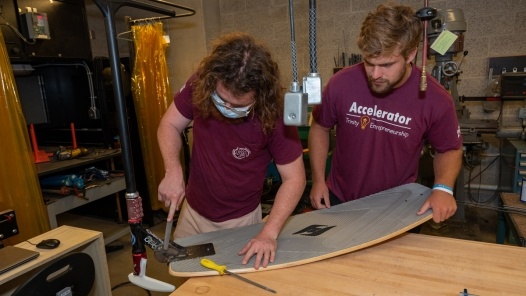 Koob (left) and Byrd at work in Trinity's MakerSpace.

“Even up until a couple weeks ago, we all had different views on what our product would look like,” Townsend says. “We told Koob what we wanted, gave him the 3D model to look at and play with, and then when we saw it put together, we thought, ‘Oh yeah—that makes sense, but it’s not how we thought of it at first.’”

“It took a little bit of all our ideas,” he adds, “and it was cool to see how that all came together.”

Koob is a former veteran of the Stumberg competition, having progressed his own startup, skateboard security system Skatecuff, to the 2020 finals. That earned him plenty of experience in Trinity’s Makerspace, an engineering shop in the Center for Sciences and Innovation where all majors can create and design.

“Koob’s not even an engineering science major,” Byrd says, “but I’ve never seen someone just be able to take ideas and turn them into something real like he has in the Makerspace. You can be a wizard with all those machines.” 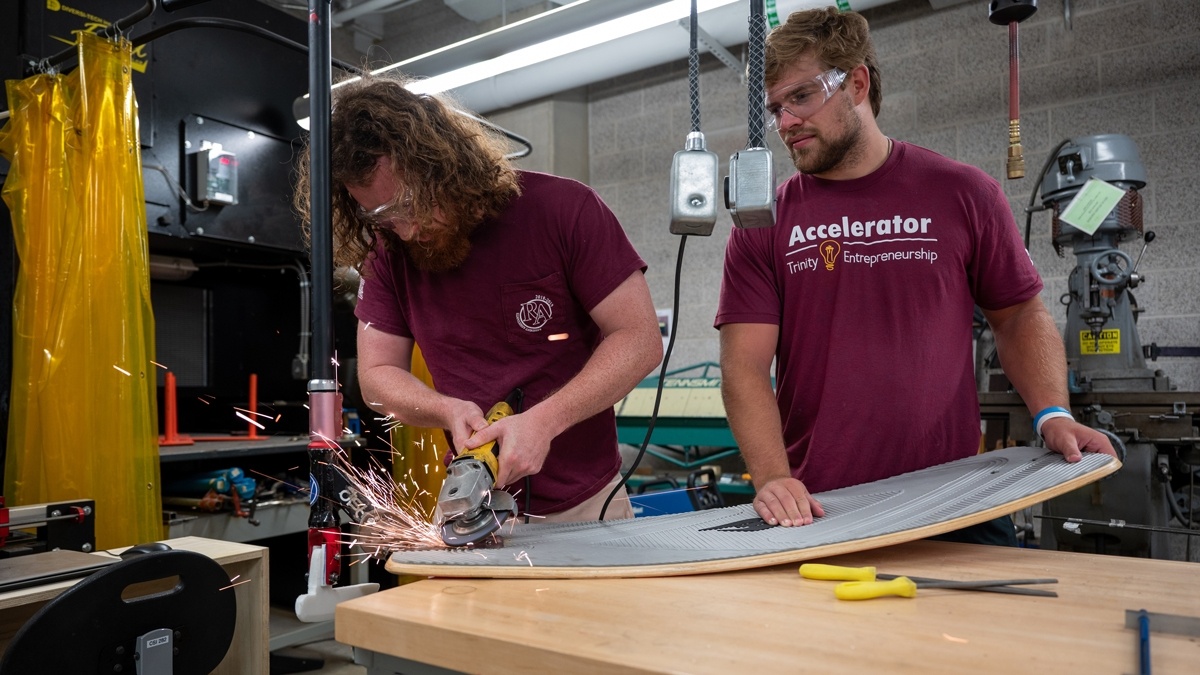 The Wakescoot design figures to keep evolving over the course of the accelerator, as the group continues to prioritize safety and accessibility features.

In merely a few weeks, the group has already refined the design to allow for a rope (which can attach to a boat, ski, or watercraft) to connect to the scooter handlebars, while also allowing the device’s handlebar to rotate while connected to that rope. There’s even talk of adding a fin for stability, as well as making various components of the scooter adjustable to accommodate  users of various heights.

“There are days where it feels like we have no idea what we’re doing,” Starcke laughs, “but we’re figuring it out as we go,”

Starcke says the group wants to sell the product directly to consumers both online and in boat shops, docks, and marinas, while also partnering with “cable parks” (think ski resorts for water sports) around the country to offer them as rentals for guests.

This means the Wakescoot team will need to learn how to interact with consumers, build their website, and develop their business as well as their product. And that’s where the accelerator plays a role outside of the design process.

Thanks to the accelerator, the group has been matched with consulting firm Blue Sky Partners—an Austin-based company that manages executive-level projects for growing companies. Matt Glazer ’04, Trinity’s 2020-21 entrepreneur-in-residence and co-founder of Blue Sky, acts as a personal mentor for the group.

“Working with Matt is a lot of pounding in the fundamentals, from sales and financial planning to legal issues and ethics. We get some really good lectures and chances to build social capital at networking events and tech bloc rallies,” Byrd says. “There, we get to meet a lot of the people who’d be interested in helping our business.”

And Byrd also says Wakescoot gets invaluable input through Trinity’s Venture Mentoring Service: “We get to spend time pitching to our mentors, and they give us one-on-one feedback, so that’s also really cool advice to have.” 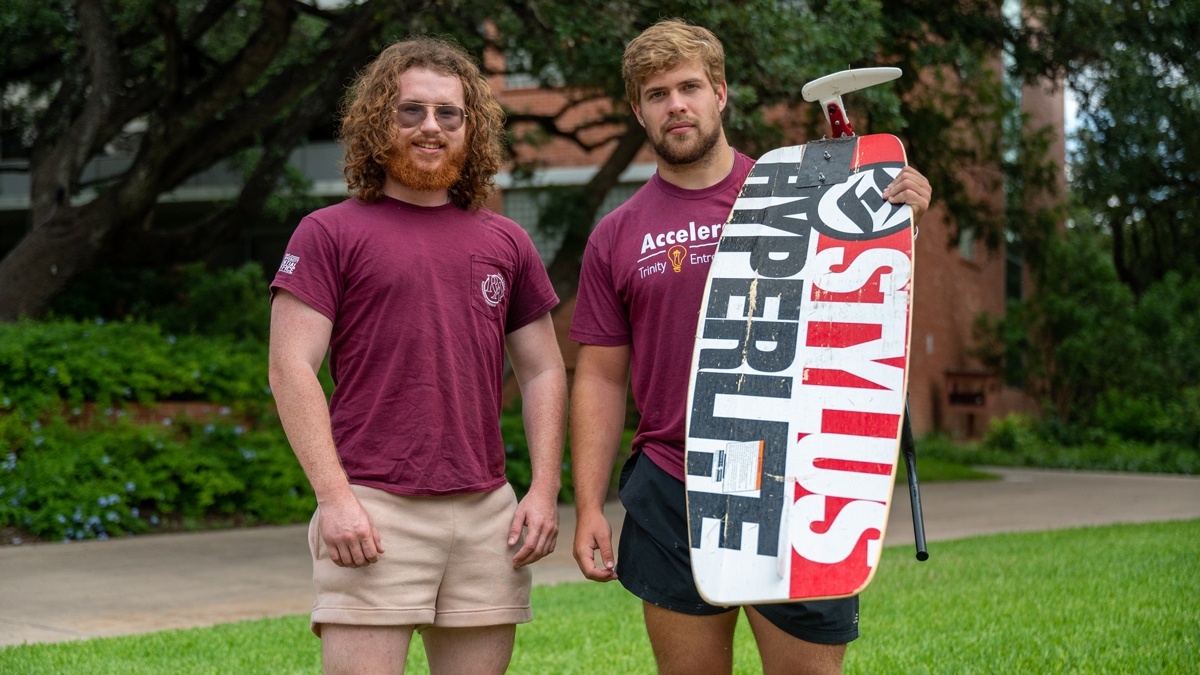 With these resources in hand, the group is aiming to have a functioning prototype by the end of July. After filming a marketing video to show the product in action on the water, it’s on to a pre-order campaign, hopefully with enough success to show off to the Stumberg judges by the time the finals roll around in Fall 2021.

Whether or not the group takes home the $25,000 prize, Byrd says he’s thrilled that Trinity is giving them the chance to develop their product over the summer.

“With this group, I feel like we’re all able to use our creative instincts,” he says. “As humans, we weren’t made to do the same thing every day—we’re meant to reach our full potential by creating something new.”