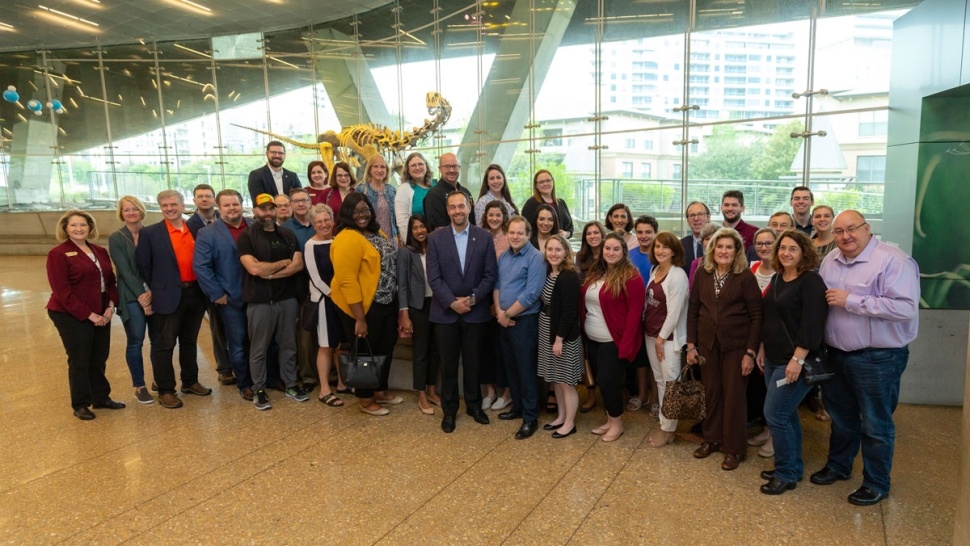 Trinity University recently hosted Trinity on Tour for the third consecutive year, bringing together members of the Trinity community from around the country for a day of learning. With more than 80 Tigers in attendance, coming from as far as Pittsburgh, there was ample opportunity to mingle with alums across different cohorts, age ranges, and fields of study. Trinity on Tour is an unconventional gathering that invites alumni, parents, and friends to reconnect with the University and each other. By grouping minds with such varied and unique perspectives on Trinity’s education, this event not only forges new social connections that stand long after the event, but also uses a collaborative mindset to keep Trinity responsive to the educational needs of the student body. 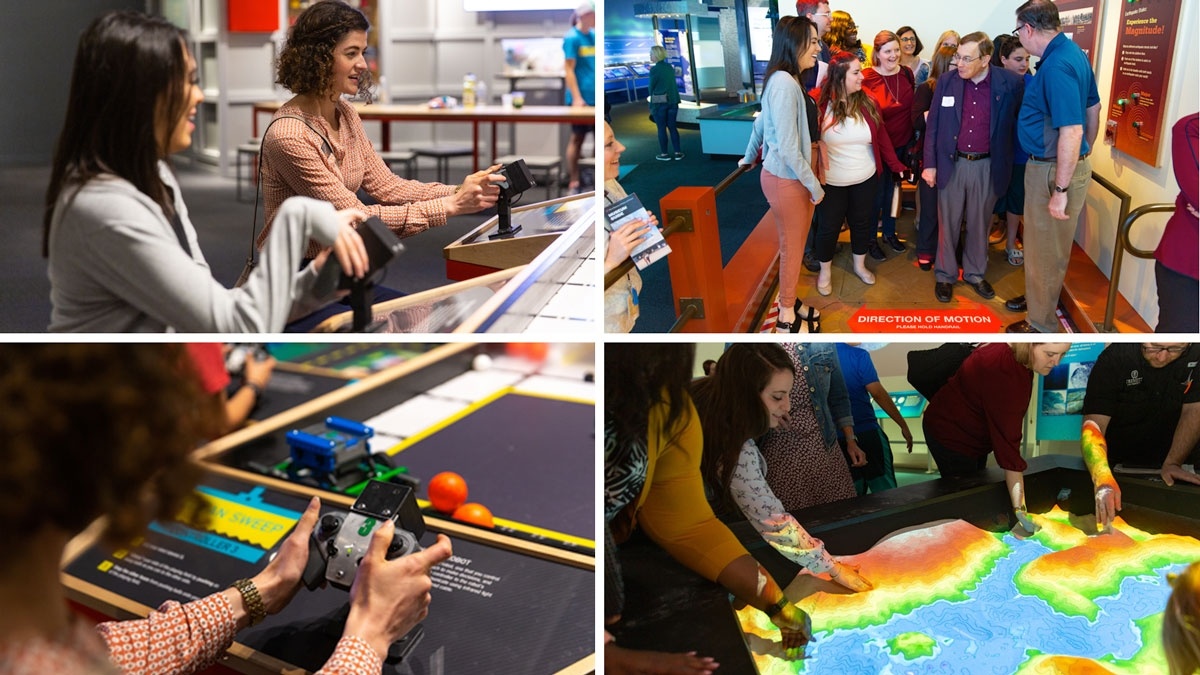 This year, the event was held at the Hilton Anatole in Dallas, Texas. The day began with a behind-the-scenes tour of the Perot Museum of Nature and Science. The tour let visitors immerse themselves in the many mystiques of the world, spanning in time from the Big Bang to modern prosthetics, in a way that was accessible to people without a background in science. The building itself came alive—there was an earthquake simulation, the stairs played music, and the intricate mechanics for the elevators and escalators were all visible for passers-by to appreciate. As if a metaphorical battle between the past and the present, the Tigers even got to race T-rexes during the memorable Perot tour. 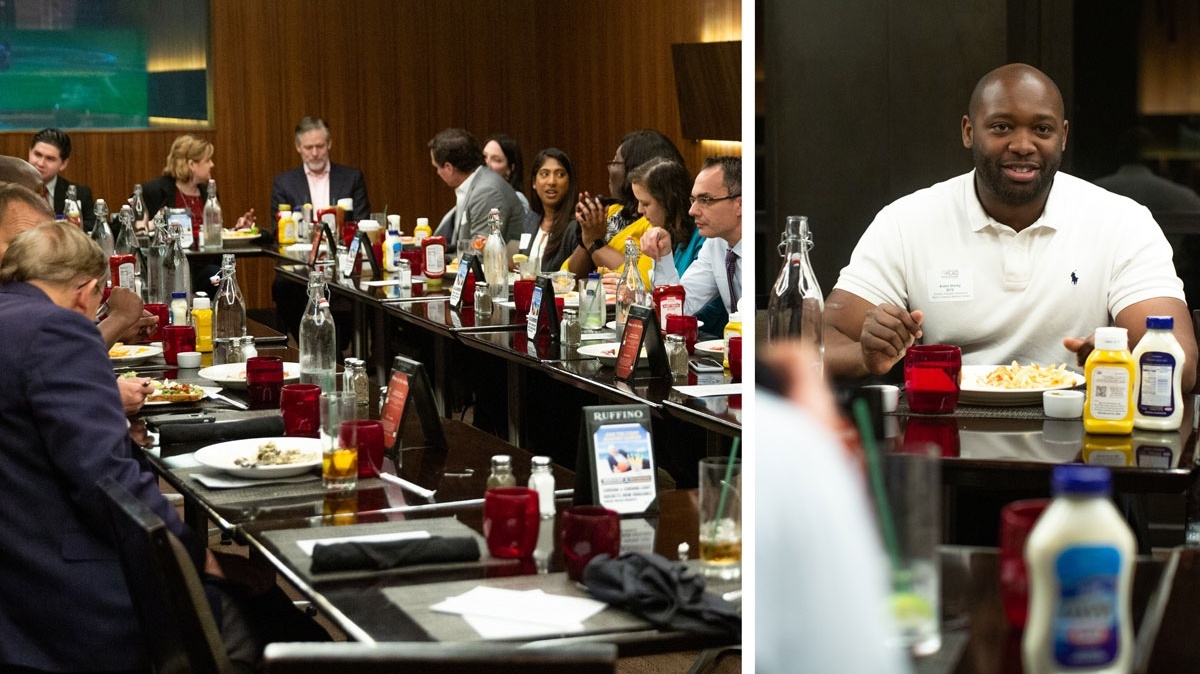 During lunch, attendees could choose to go to the Healthcare Leadership Luncheon with current HCAD professors and students, where HCAD professor Amer Kaissi was a featured speaker. Another option was lunch with Trinity’s new chaplain, Rev. Alexander Serna-Wallender '08, '09. Finally, those who chose the Young Alumni Lunch conversed with chapter presidents.

“As an anthropology person, I didn’t know some of the other professors here, but I LOVED the discussion on leadership. I’ve never been involved in the healthcare profession but [Kaiss’s lecture] was super applicable to all fields. It was awesome,” Stephanie Allen-Givens ’10 says. 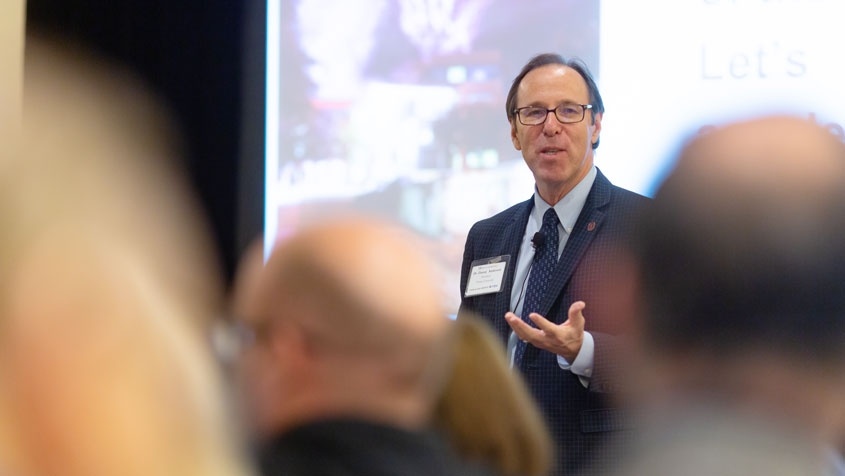 After lunch, the visiting Tigers gathered round for a State of the University address given by President Danny Anderson. The address was a celebration of Trinity’s progress and 150th anniversary, and gave context to Trinity on Tour’s mission of building upon the university’s legacy of producing top-quality students and remaining a leading example of what a strong liberal arts education looks like. 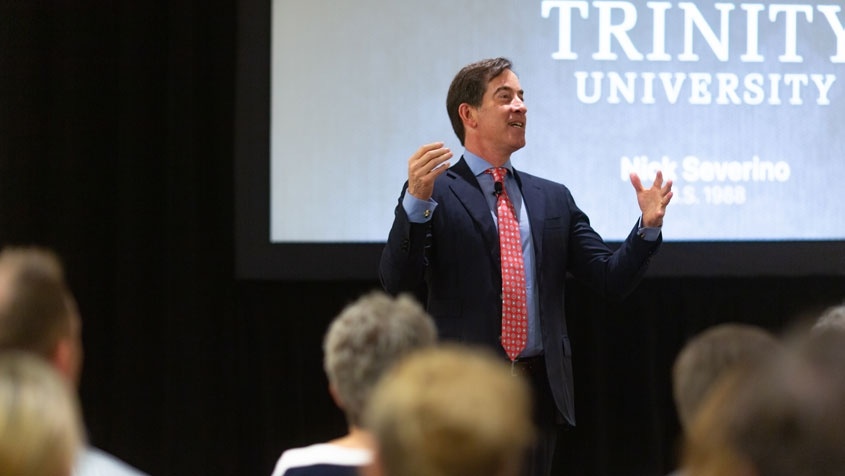 Following the address’ celebration of earning a Trinity education, the keynote presentation emphasized the value of a liberal arts skill set in the modern workspace. The talk “The Importance of a Liberal Arts Education in a Technological Age: a Personal Story” was fittingly delivered by Nick Severino '88, vice president and CFO of Apple Retail. Severino recounted how his Trinity journey gave him a multi-faceted experience, with particular highlights being his trip studying abroad in Shanghai and the strong faculty-mentor relationship he shared with Donald Clark, his history and East Asian studies professor. Severino shared that the skills he extracted from these experiences overall are what elevated him as a candidate for his current role at Apple. In fact, his trip to Shanghai is part of what inspired him to open the first Apple store in China, becoming one of his most successful career moves. 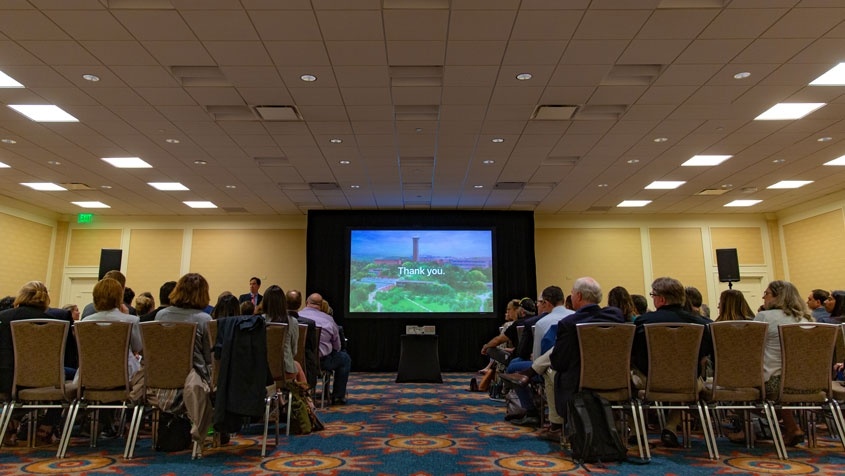 With that universally resonant message in mind, attendees were then encouraged to break out into different sessions of their choosing as part of “Classes without Quizzes.” These sessions were led by outstanding faculty with diverse disciplinary perspectives. One of this year’s attendees, Brian Buffington P’22, captured the communal essence of the event: “One thing that really struck me is how all the Trinity alumni basically gave up a day of their time to hear very talented faculty members talk about subjects totally out of the realm of their daily interests.” 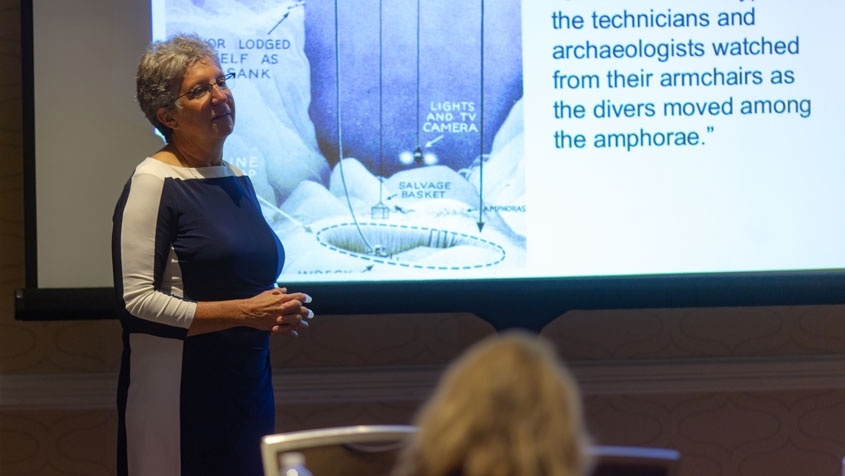 Visitors to the Manchester Room heard “Tales from under the Mediterranean Sea” from Nicolle Hirschfeld, professor of classical studies. Introducing the audience to maritime archaeology and the many logistical and ethical barriers facing the field, Hirschfeld then transitioned to her current research focus: the cargo and hull of a tinker’s ship that sank at Cape Gelidonya (Turkey), around 1200 BC. 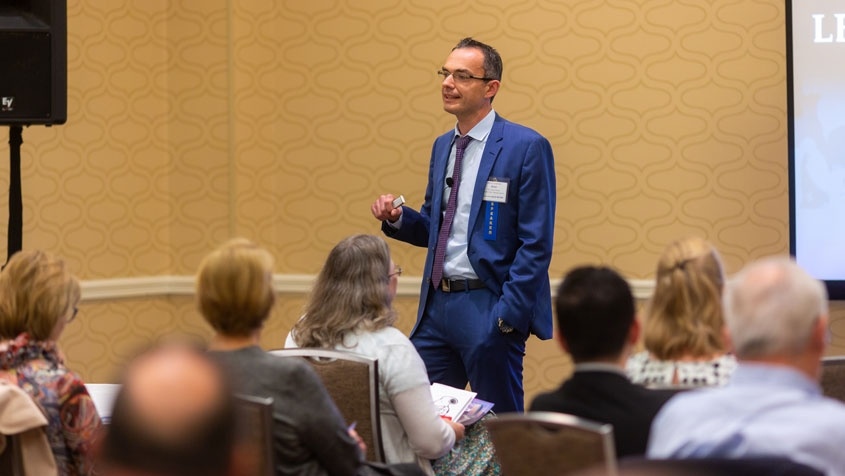 The Miro Room housed Amer Kaissi, a face familiar to visitors from the luncheon earlier in the day. Introduced by a 2013 HCAD graduate, Kaissi delivered a lecture titled “Leadership Intangibles: How Humility and Compassion Can Drive High Performance” based on his award-winning book, The Unexpected Traits of High-Performing Healthcare Leaders. He emphasized the value of soft skills such as humility and compassion in the professional world. Kaissi gave listeners a comforting reminder that, despite the prevalence of arrogance and narcissism in society, there is research from multiple fields that human empathy combined with strong ambition is conducive to high performance in organizations. 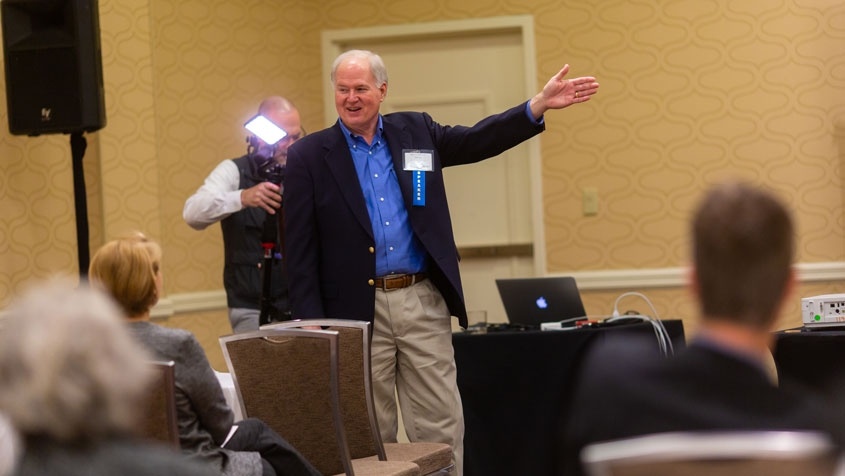 Finally, the Morocco Room was led by Glenn Kroeger, professor of geoscience, who delivered a talk aptly titled “I feel the Earth, move, under my feet: Earthquakes and You (not Carole King).” He brought attention to the fact that earthquakes do not just happen at the edges of Earth’s tectonic plates, but are becoming a very tangible reality in the heartland of the U.S. as well. Kroeger’s talk spanned the physics of earthquakes, how human activities influence the likelihood of earthquakes, and what digital resources can encourage environmental literacy and awareness of earthquake activity among the common population.

Jansen Givens ’09 remarked, “I’m from Oklahoma and [Glenn Kroeger] talked a lot about the fracking earthquakes in Oklahoma. It was really cool! I was like—this earthquake? Oh yeah, I felt that one!” 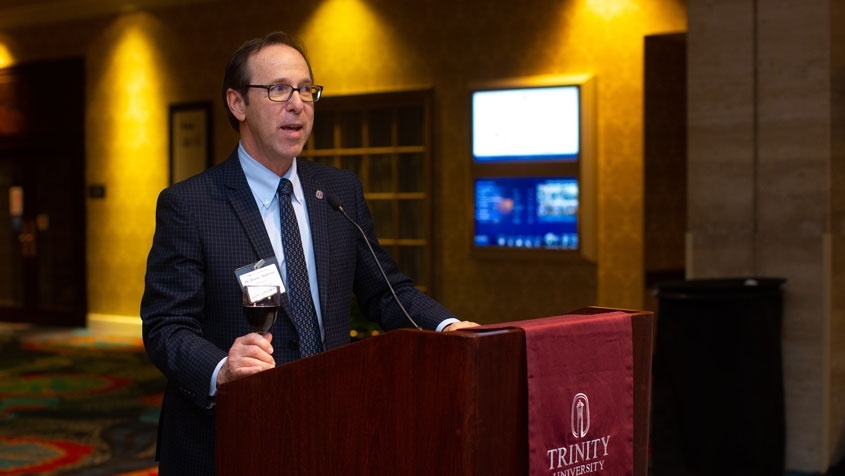 The beautiful Dallas evening of great food and exchange of cutting-edge ideas was punctuated by the president’s reception. Among the mingling and networking, President Anderson thanked all the attendees and gave a toast to celebrate the alumni and professors that came together to share their fond memories from various years in Trinity’s past, and to define Trinity’s future as a leader in modern education. 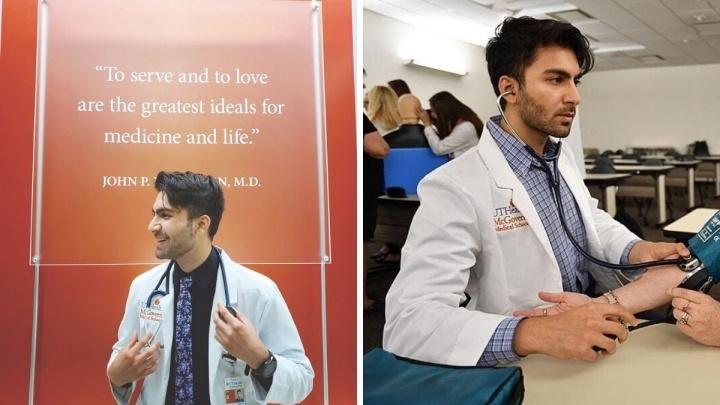 Through a Glass Window

Thursday, May 14, 2020
As a first-year medical student, most of my time involves sitting with my face…
Alumni
Trinity Magazine: Spring 2020 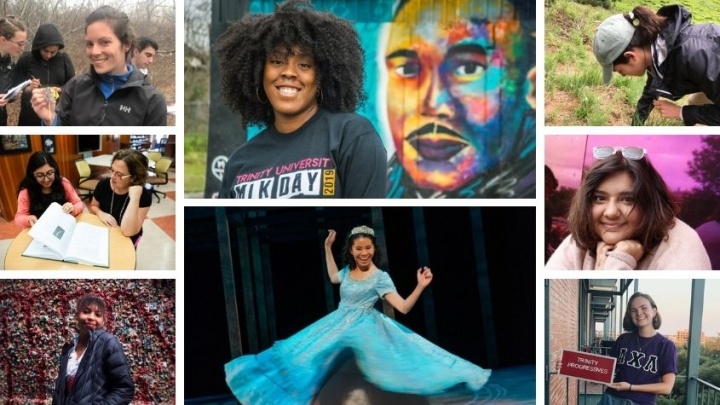 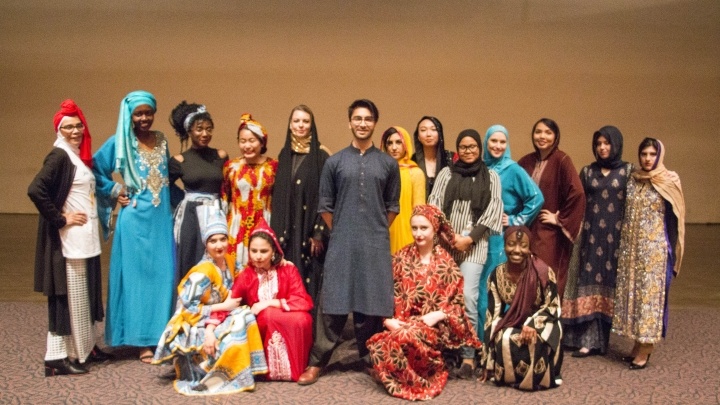 Learning How to Be a Minority