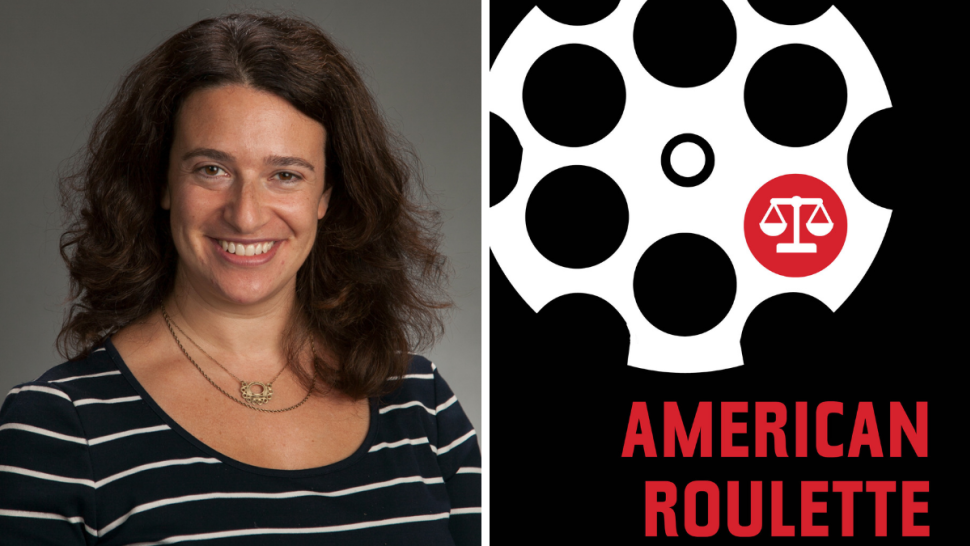 “I write from the perspective of the sociology of knowledge and culture,” Kaufman says. “I view capital trials as sites of ‘racial performances,’ where, for the most part, both the law and the social norms in which the law operates to confirm a root assumption in United States history—the assumption that impoverished, racialized young men who are tried capitally are not only dangerous, but they are inhuman enough to be acted upon in a way that no one should be acted upon, and should be killed.”

We asked Kaufman four questions about her book.

Why do you feel this book is especially relevant right now?

There are two reasons this book is relevant right now. First, the country has finally caught up with what sociologists and critical criminologists have been saying for decades: the criminal legal system is broken beyond repair. It is not only unjust; it is built on racism and a valuing of property over people's lives. This summer was a reckoning point for a lot of young people, and I hope my book can add to that conversation. My book demonstrates that even something as carefully considered as a capital trial—which has more resources than any other single element of the criminal legal system— is tremendously problematic in terms of how justice is meted out. Capital punishment is supposed to be reserved for those people who have committed “the worst of the worst” acts. My research demonstrates that this is a falsehood.

Second, public opinion has shifted around capital punishment. It used to be that the majority of adults in the United States thought that capital punishment should be used, and now the majority believe that a life sentence should be substituted for capital punishment. See the 2019 Gallup poll, for example. This is because we have seen too many cases where the wrong person is convicted, and we also have the knowledge that people who commit horrible acts have often had horrible acts committed on to them in the course of their lives. The Trump administration started using federal executions again after many decades of hiatus, and it's important for people to know how capital sentencing actually works, as opposed to only imagining it in the abstract. Even those who are pro-death penalty in principle, are shocked to learn how it works in practice.

Can you expand on how your background in sociology and as an investigator and mitigation specialist prepared you and impacted your research?

I had years of real-life experience to draw on before I began my research formally. Having worked in the field of capital sentencing was both an advantage and a hindrance. I had my memories of my work, before I became a sociologist, to mine for the book, but I also had to be very suspect of those memories. As a defense advocate, I was not objective in the ways that I viewed a capital trial. My job then was to try to help convince jurors to vote against execution. In the book, my job was to observe trials and to describe for readers the processes by which the American criminal legal system sorts people who are worthy of execution as opposed to those who deserve a sentence of life in prison. This is not to say that I pretend to be pro-death penalty as a sociologist. Instead, the process necessitated a naive view of capital trials. I had to focus on description and analysis.

For example, when I worked as a mitigation specialist on jury selection, I helped the lawyers I worked with choose jurors who would be most likely to show mercy to our clients. When I observed capital jury selection as a sociologist, my job was to make sense of how lawyers, audience members, and court staff interacted with potential jurors. I wrote about the ways in which jurors get selected, including how defense attorneys judge them to be more merciful or less merciful, but not limited to that. I came to think of jury selection as a contest over “punitive citizenship,” cultivating those disproportionately white and wealthy Americans who agree to make life and death decisions in the name of the state, and winnowing out those too emotional or invested in less punitive solutions to violence.

What conclusions or findings does your book describe?

In the first part of the book, I describe one central finding, the narrowing down of  “the worst of the worst.” In the United States, there are about 16-17,000 deaths a year that are classified as homicides. Those homicides, however, are narrowed down until we get only a hundred or so people a year who are considered “the worst of the worst” and tried for capital murder. One of the really powerful agents in that winnowing down is district attorneys. District attorneys have the power to decide who gets tried for what, and they have a lot of leeway within the law. For example, in Texas, only a handful of district attorneys out of our 253 counties actually seek the death penalty. This is not because no horrendous murders occur in the other counties, but because those district attorneys do not find it economically or morally or for some other reason worthwhile to pursue the death penalty. Texas does not “have” the death penalty in that sense, but rather some counties in Texas do. The same is true for all states that retain the death penalty in the US. Capital punishment is not distributed according to the worst crime, but rather according to the most pro-death penalty district attorneys. I don’t think most people know that.

In the second part of the book, I take readers inside capital courtrooms. I focus on the sentencing phase of the trial, the part after a jury has said the person is guilty of first-degree or capital murder. In sentencing, the jury has to decide whether that person should receive a life sentence of life in prison or a death sentence of death by execution.  I detail four aspects of the sentencing trial that I saw in almost every capital trial I observed: jury selection, examining  the defendant's childhoods, predicting the defendant’s  future dangerousness, and victims' family testimony. Those four aspects of the trial are shaped by social forces that are not accounted for by law. For exampleI began to notice how some victims' families garner obvious sympathy from jurors and judges where others don’t. I show how they embody  the idealized version of a mourning victim of violence. They testify with eloquently crafted presentations, where others are clearly less informed about what they should do or say. This has nothing to do with whether the defendant deserves to be executed, and it is terribly unfair to the victims’ families..

What do you hope people would take away from this book?

I hope people gain a real sense of how the legal process is inseparable from the social prejudices and realities that surround us. The law is not a magical, closed system. In the book, I talk a lot about performance in court, and I don't mean that performances in the court are false or fake, but that they are like the rest of our lives. They are dependent on emotions and mistakes and our consciousness of the audience who is observing us. This is a fundamental tenet of sociology: the way we behave in institutions, whether they are schools, hospitals, or family units, these are all different shades of ourselves. None of them are separate from the social norms that constrain us, and capital trials are just the same.

I want people to read the last chapter, the conclusion, in particular. I describe there why I think the criminal legal system is flawed beyond repair. It was created to serve a burgeoning white supremacist capitalist country. And it is inseparable, even now, from the norms that created it. I look forward to the future when the creative, hard-working people succeed in fundamentally changing this system. There is no reason our criminal legal system has to cause more pain and suffering in the world. Justice systems that exist to strengthen well-being and repair harm, like the youth justice system in New Zealand, are our future.