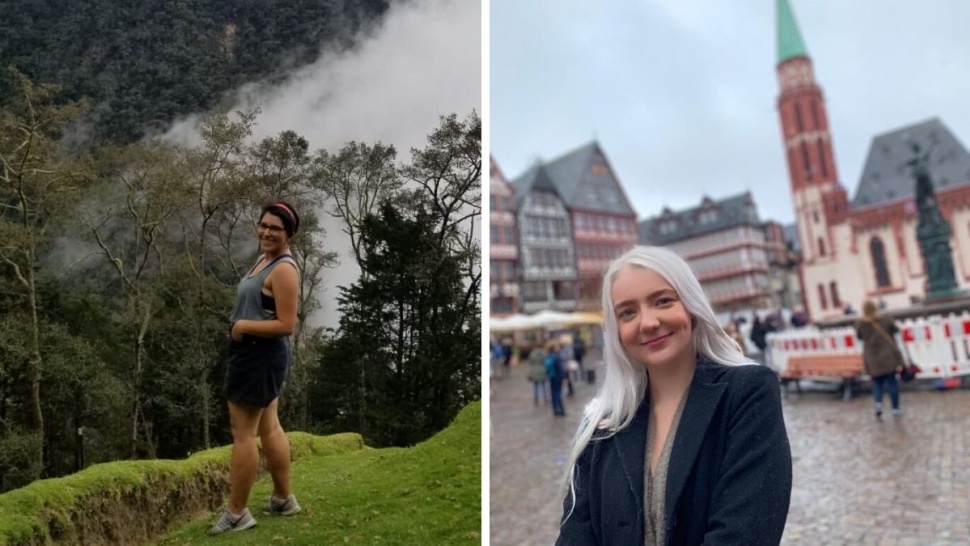 The English Teaching Assistant Programs send Fulbrighters abroad to assist local English teachers in the classroom. Throughout their grants, Davalos-Reyes and Boatright also serve as cultural ambassadors for the U.S.A. Grant benefits of the Fulbright program include round-trip transportation to the host country, funding for room and board, and a 24/7 support line.

Davalos-Reyes works as an English Teaching Assistant in the Andean region of Colombia at Universidad de Ibagué, where she teaches “club classes”—voluntary two-hour courses with no grades. She says she enjoys designing her own curriculum.

“It’s a teacher’s paradise,” says Davalos-Reyes, who majored in sociology with a minor in education. “I get to teach and create lessons related to my students’ and my own interests and for which my students are motivated to learn genuinely.”

While an undergraduate at Trinity, Davalos-Reyes studied abroad in Chile and Argentina in a comparative education experience, a program she says helped her to draw connections between Chilean and American cultures.

“They deepened my understanding of these cultures and their value,” she says.

Davalos-Reyes, who grew up in Houston surrounded by many different cultures, recalls hearing social messages that if a person does not take advantage of education opportunities, it means they are lazy or unmotivated. However, after interning with a college preparation program called Students With Ambition Go (SWAG) To College, Davalos-Reyes was challenged to reconsider what parent/family engagement looks like, especially when a language barrier is at work.

“Latinx parent/family involvement is not traditional,” she explains.

Davalos-Reyes says traditionally, parent/family involvement in education includes being present in the school, asking questions of teachers, and following up in parent teacher association meetings.

“That wasn’t my parents’ involvement, either, but I knew they were invested and that they cared,” Davalos-Reyes says. “I could see it when I talked to them.”

“I was challenged to rethink my conceptions of education,” Davalos-Reyes says. “I credit the McNair Scholars Program with so much of my success.”

Following her Fulbright program, Davalos-Reyes will pursue her Master of Arts in Teaching at Brown University.

While studying at Trinity, Davalos-Reyes worked with classmate and fellow Houstonian Katie Boatright ’19 as they both applied to the Fulbright English Teaching Assistant Program.

Boatright is the first-ever English Teaching Assistant at her school in Frankfurt, Germany.

“I have the freedom to create my own program,” says Boatright, who majored in political science with a minor in psychology.

Boatright is also part of the Fulbright Diversity Program, which places the Fulbrighters in schools where a high number of students have migrational backgrounds: either her students or their parents or grandparents are from a country other than Germany. For many of Boatright’s students, German is their second language.

“They are learning English as their third or fourth language,” Boatright says. “Inclusion and equity are really important to me, and I believe education is a highway for social mobility.”

As a first-year student at Trinity, Boatright participated in Global City Berlin two-week summer program led by Peter O’Brien, Ph.D. The critical thinking and debate experiences she had in Berlin ignited her passion for the humanities.

“I thought, ‘I’m actually really good at this, and I love it,’” Boatright recalls about her study abroad experience in 2016. “The Syrian refugee crisis was in full-swing, with Germany taking the brunt of it. It shifted my focus from wanting to pursue a medical track to wanting to pursue political science and human rights.”

Boatright is applying for master’s programs to study human rights following her Fulbright program. She hopes to stay in Europe, either in Germany or Austria.

“A one friend told me that, after I got the Fulbright, she believed I would never come back,” Boatright says. “She might be right.”