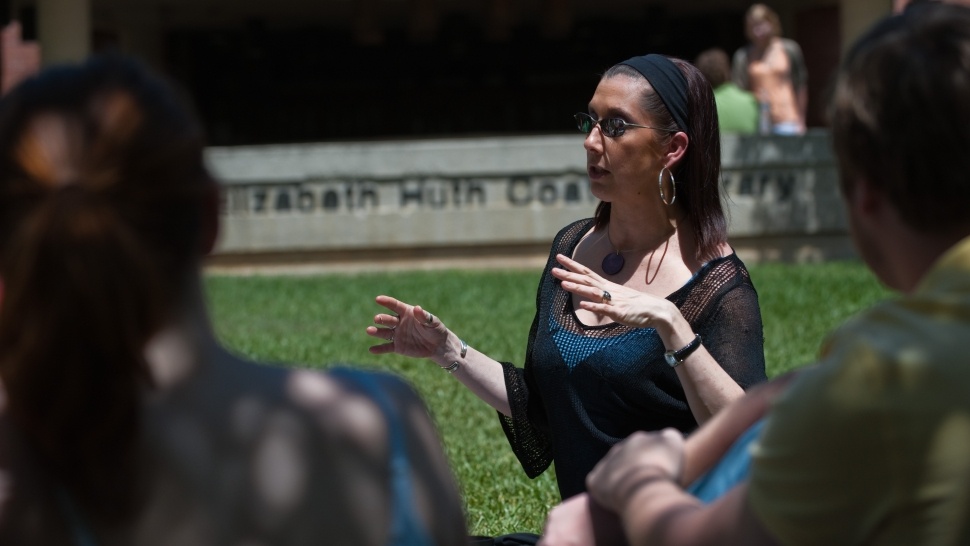 "Carolyn is an excellent representation of the model of the teacher-scholar that is so prized at Trinity," Jones says. "Her accomplishments as a researcher are only matched by her passions for teaching and mentoring service. She is very deserving of this honor."

Trinity awarded the inaugural Murchison Term professorships in 2010 and they can be awarded to full professors who have been at Trinity University for 10 years or longer. Becker, professor of psychology and a clinical psychologist, has a 20-year history of teaching and service at Trinity. She is the 10th named Murchison Professor.

Becker is a dedicated educator, also nationally and internationally known for her research on body image interventions, eating disorders, and posttraumatic stress disorder, or PTSD. Around campus and at conferences, Becker became a household name after introducing Trinity to The Body Project—an eating disorder intervention program which has been administered to 3.5 million young women and girls worldwide.

"The Body Project encourages you to behave in ways and make statements that reject the Western appearance ideal," says Becker, who has worked on research related to The Body Project for two decades. "The objective is to decrease your investment in those ideals."

When Becker brought the program to Trinity, it was so effective that sororities wanted to administer The Body Project to all their new members en masse. Key to running The Body Project is a trained leader to facilitate the intervention, which was developed by Eric Stice, Ph.D., a colleague of Becker’s and fellow research scientist.

"We ran into what’s called the scalability problem," says Becker, who holds a doctorate from Rutgers University. "I can’t be in 12 rooms at once."

Up to that point, all research on implementing The Body Project had run groups led by clinicians or advanced graduate students. "Those are very expensive providers," she says. "If you want to scale something up, you really need providers that are less expensive."

Becker’s research team tested whether The Body Project was just as effective when administered by undergraduate lay providers. "We discovered that actually, undergraduates were just as effective as clinicians," says Becker, who teaches courses in psychopathology, clinical psychology, and behavioral medicine. "The data demonstrated participants received the same magnitude of benefit whether the program was led by clinicians or by lay providers."

Trinity was the first university to implement The Body Project using peer leaders, thanks to findings discovered by Becker’s research team, and with the help of hundreds of volunteer undergraduate peer leaders, participants and research assistants who have given an estimated 40,000 hours toward the project since the year 2000. "My students deeply cared about The Body Project, and that ownership is powerful," she says, attributing the program’s success in large part to that student-ownership.

Becker shares the credit with her team of undergraduate research assistants, also because she believes sharing the burden of responsibility is where rich opportunities for teaching occur.  "My students have been very active collaborators in all of the innovations," says Becker about her students’ role in making The Body Project a scalable and sustainable intervention. "I tend to give them a lot of responsibility."

However noble, challenging a person to push themselves to new heights can be an uncomfortable exercise in and of itself. To adapt, she leans on her experience as an individual therapist working with trauma survivors, which she says has helped her to develop thick skin. "I tell my students, 'I have a high tolerance for you being anxious, and I have high anxiety tolerance about a project failing'," she says. "I’m not afraid to let a project fail."

At times, they did fail.

"One year we were running the Body Project, and it was a mess," Becker recalls. "We were not going to get any useful data after so much work. But the effect of the misery of doing all that work and getting nothing from it more than paid off. The next year, it ran beautifully."

Becker is a Fellow of the Academy of Eating Disorders (AED) and the Association for Behavioral and Cognitive Therapies (ABCT). She is a past president of the AED, and a past associate editor of Behaviour Research and Therapy. In 2009, she was a co-recipient of the AED’s Research-Practice Partnership Award for her work in disseminating The Body Project in partnership with sororities. In 2012, Becker was awarded the Z.T. Scott Faculty Fellowship for excellence in teaching and advising. In 2017, she was named a Piper Professor by the Minnie Stevens Piper Foundation for superior teaching at the college level.

The Murchison Professorships are made possible by an endowment from the estate of Norine R. Murchison whose husband, T. Frank Murchison, was co-chair of the original Trinity Building Committee and influential in the decision to move Trinity to its current campus. Creating the Murchison Term Professorships from Mrs. Murchison’s estate was a way for Trinity to preserve and further her love for the University.