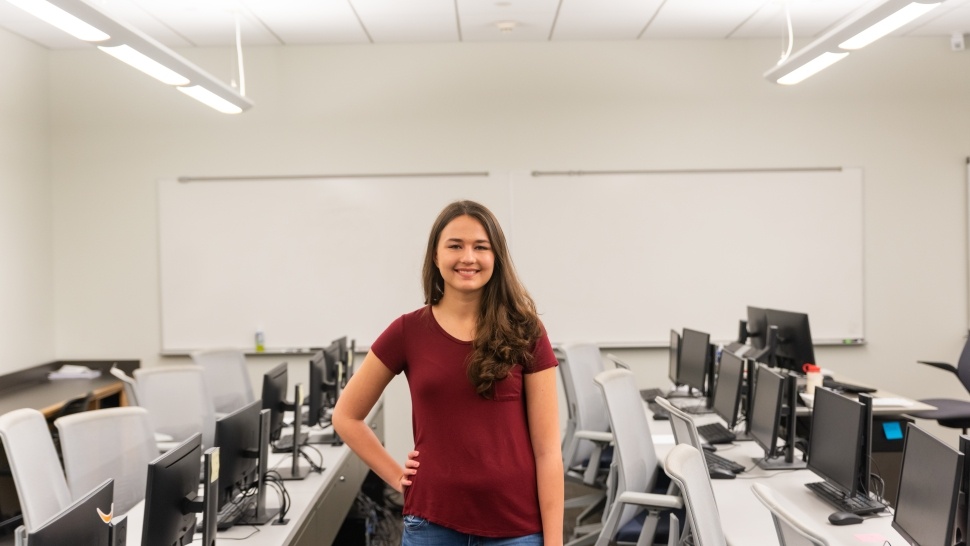 Life in the world of computer science moves fast, as new industry standards, languages, and programs constantly replace old ones.

But for computer science major Morgan King ’19, Trinity is the perfect place to stay up to code.

“We have professors, like Dr. Mark Lewis, who literally wrote the book on computing—he has his own textbook—and he’s constantly updating his materials,” King says. “The faculty here already know what’s coming out in the industry, so they’re constantly making sure our courses are up-to-date with what’s important.”

And as King remains connected with the latest trends in her computer science field—completing internships, building connections with her faculty, and conducting groundbreaking thesis research—she’s also bucking a few trends of her own.

King has served as president of Trinity University’s Women in Computing club (TUWIC), and devotes her energy to inspiring women to pursue tech careers. She's also taken steps to ensure that Trinity remains a welcoming space for all people to explore the world of computer science. 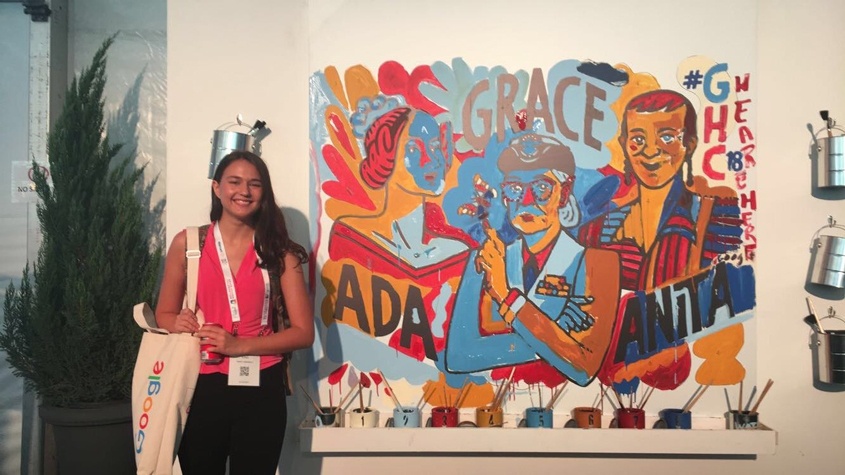 When King arrived at Trinity, she fell in love with computer science. But she also realized that, to many women, her story was an exception.

“By the time you hit middle school,” King explains, “you’re seeing movies and TV shows with hackers, nerds, and people in tech, all where the person behind the computer is a guy. And this is where you start to see stereotypes [about men and women in computing] develop. As a girl, you start to feel more self-conscious…about being the only girl in a class, or in your computer lab.”

So, King became president of TUWIC. There, she’s organized initiatives like the annual TUWIC Tech Camp, which gives area middle school girls the chance to learn about computing through logic games, practice with algorithms, and other computing-related building blocks, culminating in learning to use an actual coding program.

She’s also found support in fellow students, such as Johnneshia White ’21, and computer science professor Paul Myers. Myers helps advise TUWIC and, according to King, spends “so much of his time listening to us, and figuring out ways the department can be better for women and minority students, too.” King, along with Myers and White, have worked to create a “learning circle,” or line of communication with other small universities in the south that have also been positively impacting female and minority students in programs like computer science.

At Trinity, King also found other opportunities geared towards inclusivity, such as a trip to the Grace Hopper Celebration of Women in Computing.

“This is a really fun opportunity that Trinity funds for a few women every year,” King says. “This is the largest conference for women in computer science in the country, if not the world. There are talks where we learn about what other women are doing in the industry, in academia, and that’s cool to see because you just don’t see many women in technology.” 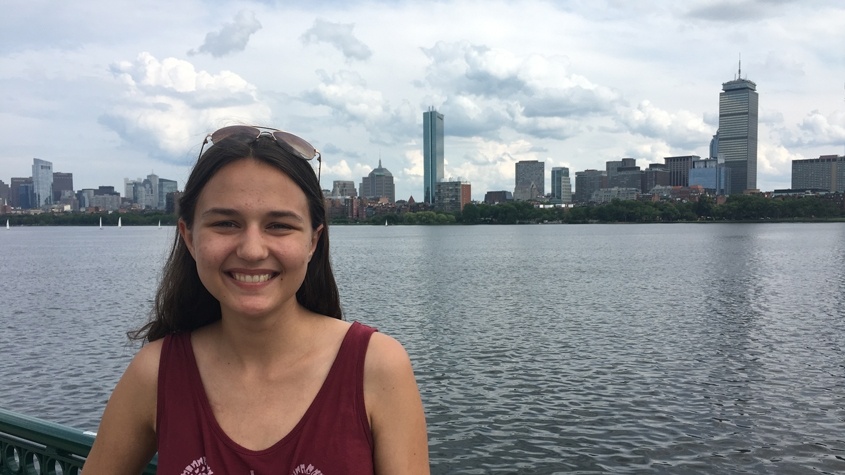 King found more than inspiration at the Grace Hopper conference.

“This is also a huge job fair where you can go look for new positions and internships,” says King, who found her upcoming summer 2019 internship at Bank of America through the event. “I can’t wait to explore working at a big company.”

Even before she starts this internship, King will have already racked up an impressive slate of industry-level experience as an undergraduate. She’s been awarded the computer science department’s Babbage-Lovelace Award, serves as a tutor for Trinity’s “crazy strong” computer science tutoring program, and has already finished software engineering internships at MIT’s Lincoln Laboratory in Boston and at Globalscape in San Antonio.

“In 2017, I got my Globalscape internship through the computer science department, which was super helpful. I learned a lot about computing and being in the industry from being in that internship. It was a really good place to get my feet wet and to decide, ‘Yes, I’m in the right place,’” King explains.

At MIT in 2018, King developed a website used by lab workers for communication.

“MIT was really fun, being in Boston for the summer was gorgeous—not the Texas heat at all. But it also gave me a chance to explore research and working in an academic environment long-term,” she adds. 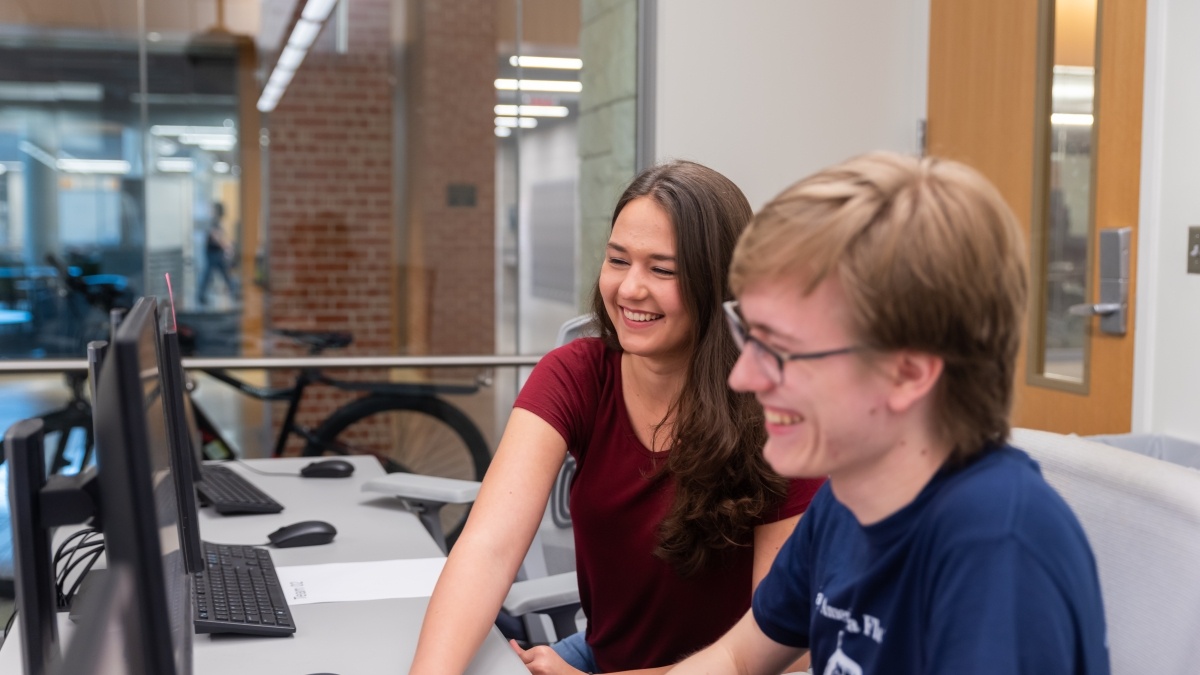 For King, maintaining close relationships to faculty has been a major key to this success.

“There are so many things I like about computer science at Trinity, but I think our relationships with faculty are the most important,” King says. “I get to know all our professors in the department. When I wanted to become a tutor, I just walked up to Dr. Lewis and asked him. It’s that kind of relationship, when I can walk into any professor’s office at almost any time and just have a conversation.”

These conversations don’t even have to be about the classroom, King says.

“One week, Dr. Lewis will be telling me about a computer science education conference he just got back from. Then, Dr. (Matthew) Hibbs will tell me about a weekend where he went to PAX South and got to play video games,” King explains. “And I’ll check in with Dr. Myers about what’s new with the department and what new processes we’ll be exploring.”

As King prepares for her final semester, these close relationships are also paying huge dividends as she adds a final task to her already huge list of accomplishments: completing her senior thesis.

Trinity’s computer science department gives upperclassmen like King the option to complete either a capstone project or write a research-based thesis. King is writing a thesis on machine learning, assisted by Hibbs. This thesis is focused on bioinformatics, or using machine learning to help map genetic information.

“It’s exciting that I’m getting to spend three semesters exploring a different side of computing I had no idea existed and contributing new research to this field,” King says. “When I came to college, I had wanted to explore the medical field and work with medical technology, because that’s super impactful. And this research was a way for me to do that, which is exciting.”

Thanks to such research opportunities, along with exploring new fields through internships and blazing a trail for underrepresented people, King is going to graduate having opened countless new doors, both for herself and for future computer science students at Trinity.

Ultimately, King says, this sort of versatility is a great skill to have when preparing for a constantly-changing career field like computer science. But being able to point to actual creative projects on a resume before even graduating? That’s the best way to jumpstart the next phase of your career.

“When you leave Trinity,” King explains, “it’s exciting to know that you’ve created something new.”