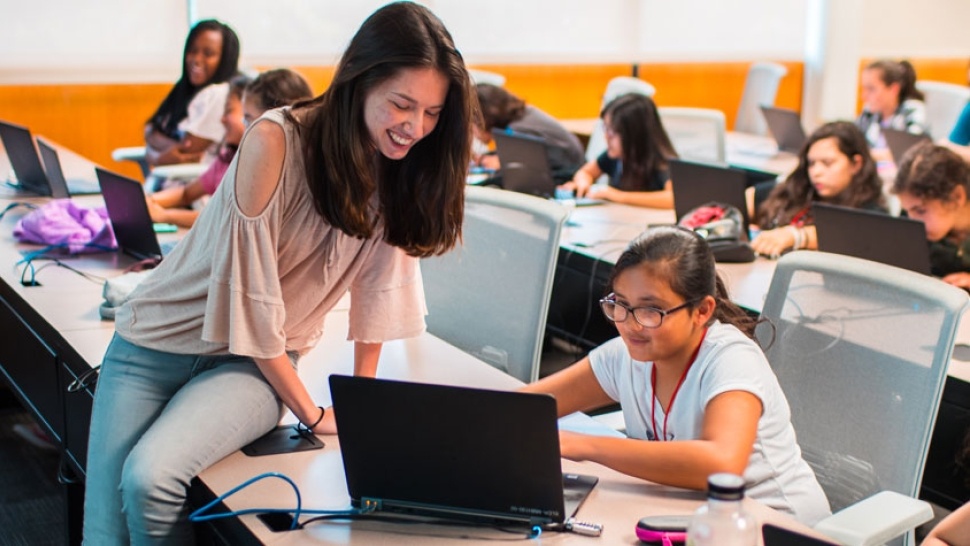 As keyboards chatter, mouses click, and waves of code stream down screens, Sarah Fordin ’19 works to keep 20 middle school girls plugged in to their computers.

Fordin is one of six computer science majors leading the Trinity University Women in Computing (TUWIC) tech camp, an annual student-run event that encourages area girls to keep pursuing tech fields—even when the rest of the world might be pushing them away.

“When you show girls that there are women in tech, in computer science, all of a sudden, they can see themselves doing that too,” Fordin says. “At Trinity, we have people going on to NASA, MIT, Microsoft, Google—and these girls say, ‘oh, you weren’t much different from where we’re starting out.’”

Tucked away in a quiet computer lab at Trinity’s Marrs-McLean Hall, Fordin and her fellow volunteers give their middle school campers a taste of what a career in tech might feel like. The camp, held over three weekends each spring, leads participants through logic games, practice with algorithms, and other computing-related building blocks, culminating in learning to use the coding program Scratch. By the end of the process, campers get to display their creativity in building small games, which they present to their parents.

But for all the code, processes, and software, the biggest programming obstacle the tech camp tackles, says TUWIC president Morgan King ’20, is a simple set of stereotypes.

“By the time you hit middle school, you’re seeing movies and TV shows with hackers, nerds, and people in tech, all where the person behind the computer is a guy,” King says. “And this is where you start to see these stereotypes develop. As a girl, you start to feel more self-conscious…about being the only girl in a class, or in your computer lab.”

These stereotypes can manifest past middle and high school, Fordin adds.

“People see a girl in their class and assume, ‘Oh, she’s not as good with coding,’ or ‘you can focus on making the presentation pretty.’ You get shoved into these gender roles,” Fordin notes. “It’s hard to keep reminding people, ‘No, I can do everything you can do.’”

And it’s one thing for Fordin—an accomplished computing whiz who co-founded her own business as a Trinity sophomore—to shake off these stereotypes. But, Fordin asks, imagine asking a middle-schooler to handle the same sort of gender-based pressures.

“That’s why this tech camp is so important,” Fordin says. “For these girls, seeing that, yes, they are capable of succeeding in this field, that lets them push back.”

Sarah Zbidi ’19 is another computer science major leading the TUWIC tech camp. Zbidi, whose mom was a software instructor, learned by “messing around” with computers as a kid.

“Trinity’s computer science department does a really good job of reaching out to women and making sure they’re included,” Zbidi says. “But that doesn’t happen everywhere.” 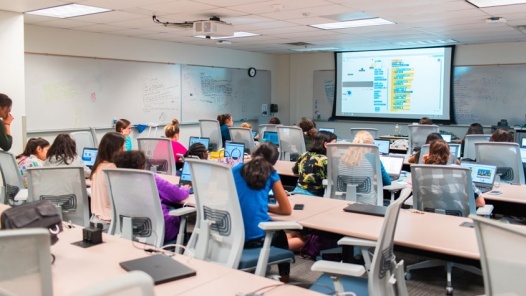 As Zbidi and Fordin float between different workstations, this can-do energy seems to snowball. As more and more campers ask questions, more and more breakthroughs and “a-ha” moments resound through the room.

“The best part of this experience is helping these girls, step-by-step, then seeing that light bulb go off in their heads when they figure it out,” Zbidi says. “They have this sudden moment of realization: ‘Hey. I can do this.’”

TUWIC tech camp isn’t all coding—the event includes space for more conventional “camp” activities such as tye-dying shirts and jamming to music. The Trinity volunteers also spend time showing the girls what a college campus is like: describing the classes, residential life, internships, and experiential learning that define life at Trinity.

But at its core, the tech camp gives girls a chance to see technology as a tool, not an obstacle, to achieving these dreams.

“When we were working with Scratch, we had one camper keep telling us, ‘this is so fun!’ She couldn’t get over how excited she was,” Zbidi says. “When you find something they’re interested in, these middle school girls can be some of the most fun, creative, and excited people.”

As a new wave of hands pop up from the computer lab desks, Zbidi and Fordin hustle back to work.

Zibdi adds, “But you have to cultivate that.”