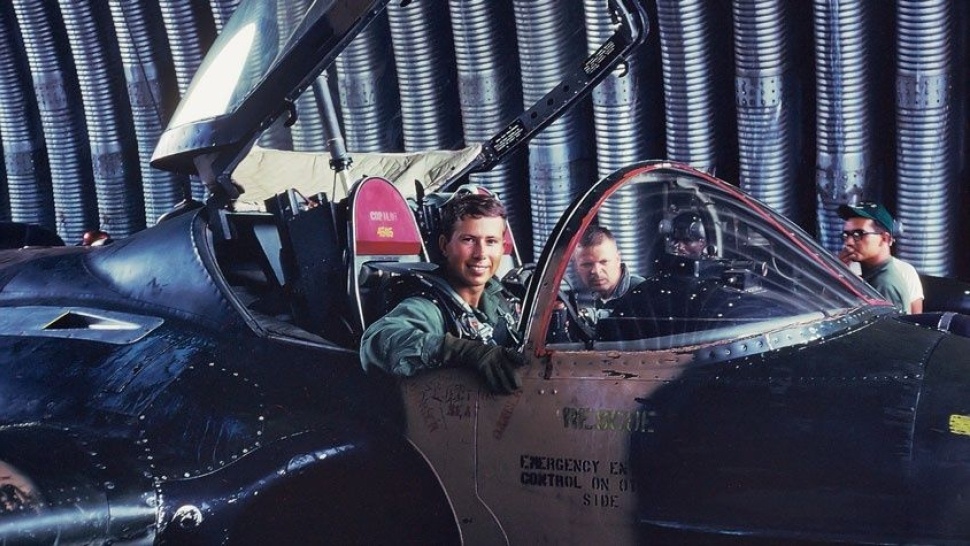 Sitting on Saddam Hussein’s palace throne in 2004, Harry “Bud” Holzman ’74 had a few thoughts about power.

“So many Iraqis had lost their electricity in the war, and it was 130 degrees over there,” says Holzman, stationed in Al Faw palace during the final four months of his Iraq tour. “I just wanted to figure out a way to turn everybody’s AC back on.”

Holzman has always stayed cool under pressure. As a U.S. Army counterintelligence analyst in Iraq in 2004, he also was charged with helping the U.S. and Iraqi governments administer justice to members of Hussein’s regime—and actually signed Hussein’s official recommendation for arrest warrant.  Holzman also used his geosciences expertise to restore Iraq’s damaged oilfields to working status, helping bring power back to millions of Iraqis. Before that, he enjoyed a 25-year geological career at Geomap, all after surviving tests from Trinity’s demanding geology department and the perils of flying aircraft in the Vietnam war.

“And let me tell you,” Holzman says of his days at Trinity, “Vietnam was nothing compared to taking tests under (the late geology professor) Dr. Donald McGannon. I remember a 12-hour ‘Optical Mineralogy’ final that was harder than any combat mission.”

At Trinity, Holzman pursued a love of rocks, fossils, and science dating back to his childhood days in La Mesa, Calif. As a young man, Holzman loved playing outdoors, and even had baseball dreams, briefly playing second baseman for the San Diego Padres when they were still a minor-league team in the 1960s. 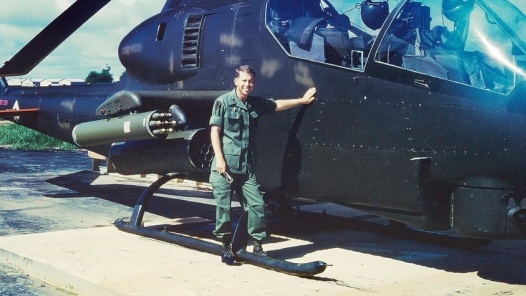 For all his time spent digging through rocks and dashing between bases, Holzman actually took to the skies before his Trinity days. Joining the Marines in 1966, he eventually transferred to the U.S. Army in 1967, where he piloted helicopters and became one of “very few” Army pilots to operate an A-37 fighter jet. Before Holzman left active duty in 1971, he was shot down multiple times, suffering a couple of bullet wounds and leg and back injuries but surviving each of his crashes.

“It seems like every mission I went on, they made a point to shoot me down,” Holzman chuckles grimly. “My call sign went from Spartan 13 to Magnet Ass 13 because I attracted lead.”

“I actually flew as (President) Nixon’s combat pilot in 1969,” Holzman says. “He came into the Presidential Palace in Saigon, and I flew him in my Huey to visit the 1st Infantry Division at Di An.”

Flying a president came with a more robust military escort than all of Holzman’s other missions, and surrounded by dozens of gunships and fighters, he felt an unusual feeling.

“I felt like there was no way I was getting shot down on that flight,” he laughs. “That was an experience.”

After Vietnam, Holzman joined the Texas National Guard and decided to get a college degree.

In 1972, he started at San Antonio College for two semesters, and then attended Trinity for his final two years of school, graduating in 1974 with a degree in geology. He remained in the National Guard and kept flying throughout school, even serving as Bexar County’s first police helicopter instructor in 1971.

“I didn’t get much of a social life outside of the geology department—I went to class by day and flew at night and on the weekends,” he says. “I remember studying in the aircraft hangar at Stinson Field at night between missions.”

“I love geology because it’s the story of how the earth was created—how it evolved,” Holzman says. “And at Trinity, we learned in the real world. We’d take trips to field sites in Colorado, the Guadalupe Mountains, and West Texas. All of the time you learn social skills, and you learn how to work as a team.”

After Holzman graduated, he knew he wanted to move into a career in geosciences.

“People need energy,” he says. “Your lights don’t just turn on by themselves. I wanted to be part of that.”

This drive led him to a 25-year career at energy service company Geomap, where Holzman started as a geologist and worked his way up to president of the company between 1975 and 2000. 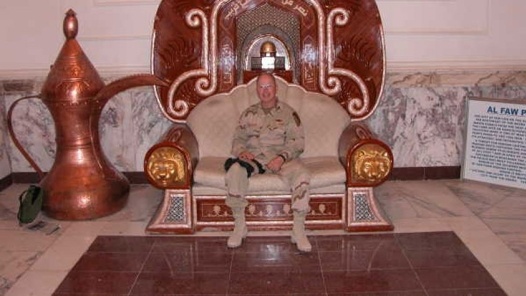 In January 2000, the Army came calling again, but not for Holzman’s piloting skills. Holzman, now in his late 50s, spoke some Arabic and had a unique knowledge of the oil profession, making him an ideal candidate to become a counterintelligence agent in the Middle East.

“In Iraq, your age—they respect that there. I wish kids over here would learn that trait. A lot of sources and tribal elders we were trying to establish relationships with wouldn’t talk to younger American agents, so I was called in,” Holzman explains.

In Iraq, Holzman’s first task in 2004 was to clean up Abu Ghraib prison, the site of a disastrous scandal involving the mistreatment of Iraqi detainees.

“I spent my days living in one of the cells at that prison,” Holzman says. “Not the most spacious place—I was 58 at the time and feeling my age.”

But after helping the U.S. forces at the prison, Holzman was on the move to a new location: Al Faw Palace, Saddam Hussein’s former summer home. Located on a pristine lake in southwest Baghdad, this compound served as the headquarters for the Multi-National Force-Iraq (MNF-I), the coalition of U.S.-led forces that led the occupation of Iraq after the fall of Hussein.

“Fifty-foot ceilings, gorgeous views—I went from living in a cell to a palace with gold bathroom handlebars and ivory toilet seats,” Holzman says, leaning in. “You know—that kind of place.”

But even at Al Faw, Holzman notes he couldn’t shake the injury bug. One night, insurgents launched a mortar round onto the palace compound, and Holzman suffered yet another active-duty injury, getting blown out of the cot in his tent and injuring his shoulder.

“Even at the palace...” Holzman smiles ruefully, his words trailing off as he shakes his head.

But Holzman wasn’t at the palace for the decor—or the danger. Serving as a counterintelligence chief analyst for the U.S. Army, Holzman had a graver duty: making an official recommendation for the judicial fate of nearly 100 members of Hussein’s regime, including the ousted dictator himself.

“Not everybody in this group was evil—some were forced into his service,” Holzman says. “But we visited the mass graves (left by the regime), saw the crimes they had perpetrated… and you see the lasting effect Hussein’s rule had.”

Simply put, Holzman’s job was to help the U.S. government figure out and recommend which of these regime members to release, and which to recommend to the Iraqi government to sentence. But this task was anything but simple.

“You have to figure out what effect… punishing or releasing every one of these people would have on the (new Iraqi state),” Holzman says. “But for some—like Hussein—recommending trial and punishment was the only choice.”

Hussein, who evaded U.S. authorities at the onset of the U.S. offensive in early 2003 until his capture in December 2003, was handed over to the new Iraqi government in June 2004, then tried and executed for his crimes.

The final stages of Holzman’s military career now turned towards his original passion and area of expertise: geosciences. The Iraqi people had lost many of their oil fields to the damage of war, and vast swaths of the country were without electricity.

“Everyone was talking about handing political power over to the Iraqi government, but my priority was getting ‘power’ back to the Iraqi people,” Holzman says. “With the insurgency and the continued violence, our feeling was that if we could at least turn people’s electricity back on, that was bound to calm people down a bit.” 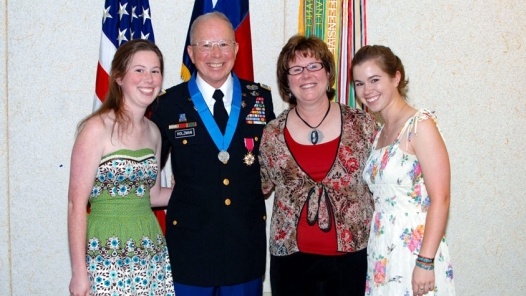 Holzman at his retirement in 2008, alongside his wife, Teresa (center), and daughters Jessica (far left) and Heather (far right).

BACK ON HOME TURF

At long last, Holzman was able to retire from active duty in 2008. His 41-year military career ended with honors including the Legion of Merit, Distinguished Flying Cross, two Purple Hearts, Bronze Star, 40 Air Medals, and the Vietnamese Cross of Gallantry, among others. He earned his Army Master Aviator Pilot Wings in 1976 and a Combat Action Badge in 2004.

But for a man whose entire life has been about energy—literally—Holzman hasn’t slowed down. Returning to Texas, he went to work for local billionaire Red McCombs and Dan Hughes to evaluate oil exploration blocks in Iraq’s Kurdistan region. He’s since gone on to work as a geological consultant right here in San Antonio for Thunder Exploration, and he’s “never planning to retire.”

If you want to see Holzman in his element, just get him talking about his home turf.

“Trinity’s campus, this part of San Antonio, we’re sitting on a ‘graben’ - that’s a low area between two faults in the earth,” he says. “We still find Cretaceous fossils out here, and I still get excited every time that happens.”

That passion for geology, Holzman says, springs from what he learned at Trinity.

“At Trinity they instill this in you: when you find a problem, they want you to go find answers,” Holzman says. “And whether you’re talking about your aircraft getting shot down, living in 130 degrees, working 16-hour days for months at a time, you have to show persistence—you never give up.”