Emilio Nicolas Sr., longtime member of the Trinity Board of Trustees and Trustee Emeritus, died October 12, 2019. He was 88.

A native of Mexico, Nicolas pioneered Spanish-language television in the United States and was involved in creating the network that became Univision. 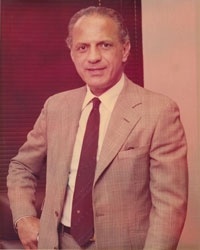 After receiving a bachelor's degree in chemistry and biology from St. Mary's University, Nicolas earned his master's degree in biology from Trinity University in 1952. This education prepared him for his first career as a researcher at the Southwest Foundation for Research and Education, where he worked on arteriosclerosis, or hardening of the arteries, and on the development of the polio vaccine. The organization today is the Southwest Research Institute.

In 1955, Nicolas began working for KCOR-AM, San Antonio’s KCOR-TV, the nation’s first Spanish-only radio outlet founded by his father-in-law, Raoul Cortez and later, KCOR-TV Channel 41, when it opened in 1956 as the nation’s first Spanish language television station and the first on the new UHF spectrum. With a team of investors, they bought out Cortez and began launching a series of five owned and operated TV stations under the name of Spanish International Communications Corp. They then began affiliating with other new UHF channels  creating the Spanish International Network, which would eventually be renamed as Univision. This was the nation’s first satellite interconnected television network, preceding Ted Turner and PBS by nearly two years. Univision remains the most-watched Spanish-language network in the U.S., reaching more than 95 percent of Hispanic households in the U.S. Nicolas received numerous national and international awards over his career, including the The Spirit of Broadcasting awarded on a few occasions by the National Association of Broadcasters.

Nicolas was a loyal Trinity supporter and served on the Board of Trustees from 1980-2006, after which he was named Trustee Emeritus. His son Emilio Nicolas Jr. and grandson Emilio B. Nicolas both followed in his footsteps, graduating from Trinity as undergraduates in 1975 and 2002, respectively, and also working in the entertainment industry. At Nicolas’ grandson’s graduation, former Trinity president Ron Calgaard remarked that was the first time in Trinity’s history that three generations of the same name had graduated from the University. Emilio Jr. also served as Trinity’s director of Student Activities from 1973-1975 and was instrumental in the creation of KRTU Radio. 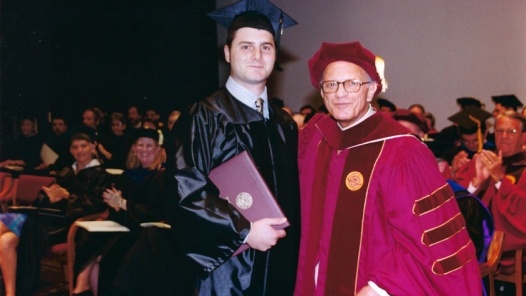 Emilio Nicolas Sr. presented Emilio B. Nicolas, his grandson, with his Trinity diploma.

Among his many prominent civic roles was serving as chairman of the National Association of Spanish Language Broadcasters. Nicolas is also remembered for his passionate editorials on matters affecting Hispanics living in the United States. Many have said it is due to his life’s work that the Hispanic community gained a national voice.