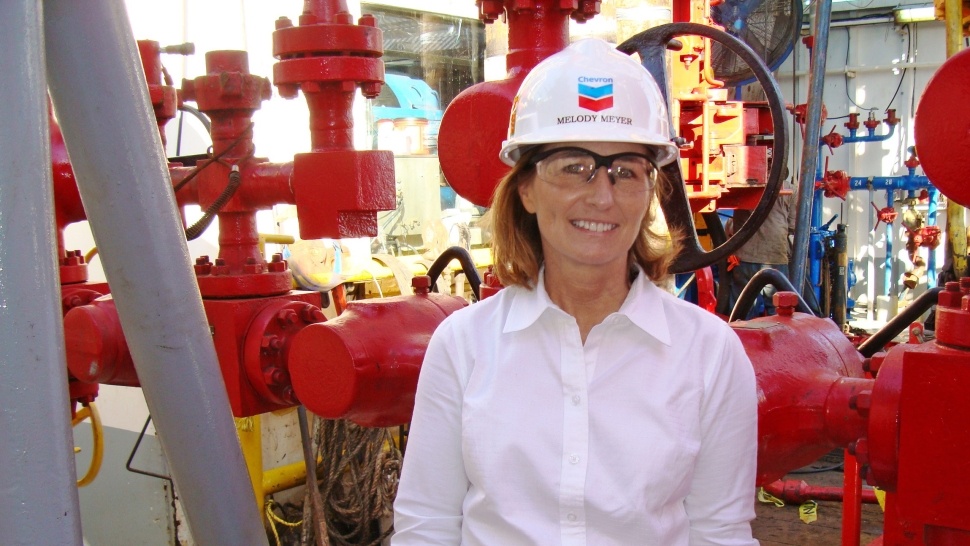 Picture this: It’s 1979, and a Trinity graduate, armed with a degree in engineering science, joins  Gulf Oil’s (now Chevron) Houston offices to design and construct the company’s West Africa facilities. This graduate has taken an early lead as a project manager, designing the facilities with U.S. engineering firms, constructing the off-shore platforms and pipelines mainly in fabrication yards in France, and then installing them in Angola, Nigeria, and Zaire (now Congo). The night before this graduate arrives in Angola, a country deeply disrupted by raging civil war, the managing director has machine gunfire rip through the back of his car on his way home from dinner.

Now, make this graduate a Trinity homecoming queen in her early twenties who had never been on an airplane before she started this job. However, her extensive job experience started at age 15 honed a strong work ethic and desire for lifelong learning—and made her the perfect person for the job.

“I’ve always had a high sense of adventure,” she says, “and I’ve taken on tough challenges that required me to be very adaptable. I was always the only woman in the room. All eyes were on me, and I had to be highly capable and professional. If I were seen as being less resilient than my colleagues, I wouldn't have made it.” 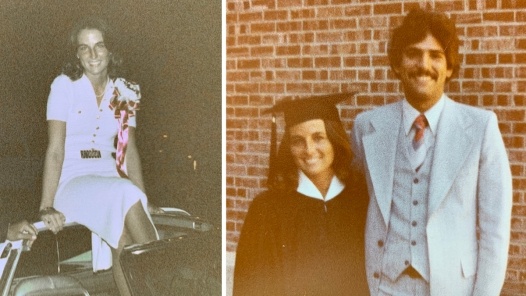 Melody Boone Meyer '79 was Trinity's 1978 homecoming queen; she later married her high school sweetheart, who has been her partner for more than 40 years.

Oh, she made it—and then some. Over the course of the next three decades, Melody Meyer ’79, P’04, P’06 would travel across the world and back again. All together she worked in or on projects and operations in 19 countries, from the South China Sea to Papua New Guinea to Kazakhstan and then returning to Angola before assignments in North America. In Kazakhstan and Angola, she worked “28/28” rotations (28 days in-country, 28 days home; away from family half the year) for almost eight years. In the U.S., she led the onshore MidContinent region across 10 states, led the offshore Gulf of Mexico operations, and was president of Chevron Technology Company. Meyer was also president of Chevron Asia Pacific Exploration and Production, headquartered in Singapore, where she was responsible for all upstream production and exploration operations, and the companies’ largest project investments in 11 countries from China to Australia. After a distinguished 37-year career with Chevron, Meyer retired in 2016 to pursue what she calls “phase 2” of her career.

If you’re tired just reading that, you’re not alone. Neither was Meyer. She did all this while raising a family with three children (two of whom also graduated from Trinity), and while she credits her husband for his unwavering support and partnership with their family, she also acknowledges having had no female role models to look up to in the male-dominated oil and gas industry. “It wasn’t reasonable for me to look up in my company and see a woman in line management leading any part of the business,” she says. “I had to grasp small role models wherever I could. I met a young process engineer who told me she had three kids—just her saying that, I thought, ‘Okay, if she can do it, I can do it.’” 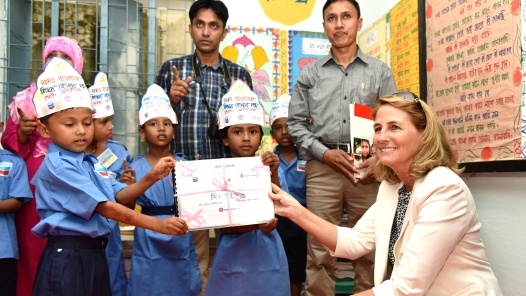 Meyer's work took her around the globe, including working with a youth program in Bangladesh in 2015.

It wasn’t long before Meyer’s mentality shifted from finding role models to being one. Having long known that the “good ol’ boy” system that reigned supreme in her early years in the oil and gas industry was not the style of leadership she wanted to exhibit, Meyer developed a style she became known for throughout the company. “I focused on being extremely prepared and extremely professional,” two traits she says became necessities for resilience on her career path. “I was really driven to create value, so I was very focused on getting the best results with high integrity, high collaboration, high trust, and high performance. I have always shown tremendous respect for everyone’s contributions and was immensely honored by one of my direct reports late in my career who told me I had the highest EQ (emotional quotient) of any leader in Chevron.”

All of this stems from the “high work ethic” that Meyer honed while an undergraduate at Trinity. Along with facing the pressures of being one of only a handful of female engineering science students and the necessity to graduate in four years, she balanced a full, challenging academic course load with her membership in the Chi Beta Epsilon sorority.

“The biggest value of my Trinity degree was what I call becoming a ‘T thinker,’” Meyer says. She explains that she grew depth—the stem of the T—in engineering science, while also growing breadth—the arm of the T—in being able to integrate disciplines, partnerships, innovation and people through the liberal arts model. “Complex and integrated problem solving and decision quality served me for my entire career.” 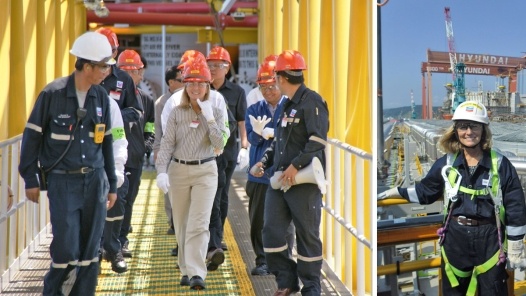 From project management to global leadership, Meyer has worked on-site with Chevron teams.

Today, in “phase 2” of her career, Meyer focuses on bringing energy to people and organizations she’s a part of. Meyer currently serves on the board of three Fortune 500 public companies, and on two nonprofit boards: on the National Bureau of Asian Research and as the Chair of Trinity’s Board of Trustees. She is on the Advisory Board for McKinsey’s Advancing Women in Energy Initiative and co-leads Houston’s Women Corporate Directors. She provides select executive consultancy through her company, Melody Meyer Energy LLC, and advocates for the advancement of women through Women with Energy LLC.

Chairing Trinity’s Board of Trustees during times of uncertainty may seem a daunting task, but Meyer’s track record of navigating crises makes her the perfect person for the job. “What I call ‘creating advantage from change’ has been an important part of my career,” Meyer says. She’s certainly seen her fair share of change: three new start up countries, three major mergers, five major price cycles, the Katrina/Rita hurricanes in the Gulf, and large growth projects all involving leadership through crisis and change. Fitting, that she should help guide Trinity through the changes necessitated by the coronavirus pandemic.

“When change happens, you must respond to it,” Meyer says. “You can either react and just only survive, or you can proactively reposition to come out much stronger, more robust, and better than ever before. I think Trinity has the opportunity to create advantages from the changes that we’re going through as well.”

Meyer admits that her own vision and plans for the Board and the University have also shifted to address the need for change. Specifically, she cites the University’s new strategy map alongside the Campus Master Plan and Diversity, Equity, and Inclusion Task Force as pivotal strengths for the future of Trinity. “We have outstanding faculty, beautiful facilities, amazing students. And we have a deeply committed and caring Board of Trustees who have served the University for many years,” she says. “My goal is that we position ourselves for our moonshot goals and that we live our values every day, that we are accountable to those values and to each other, and that we continue to uphold those values for our future generations.”

Enduring excellence. Intentional inclusion. Perpetual discovery. Trinity’s values don’t just anchor it as a University, but drive the delivery of a transformative type of education. “Trinity doesn't graduate workers, we graduate innovative leaders,” she says. “Working all over the world, I would run into Trinity grads in the most unusual places. They were always in big leadership jobs, leading the thought-leaders, leading their organizations. I see our Trinity students as those people that are making a difference, and they're going to lead our future. It's up to us to make sure we equip them to be the leaders that we know they can be.”

Meyer is the “godmother” of two liquefied natural gas (LNG) tankers, both of whom she named: the British Listener and the Asia Energy. Meyer says she counts the tankers among her "grandchildren."