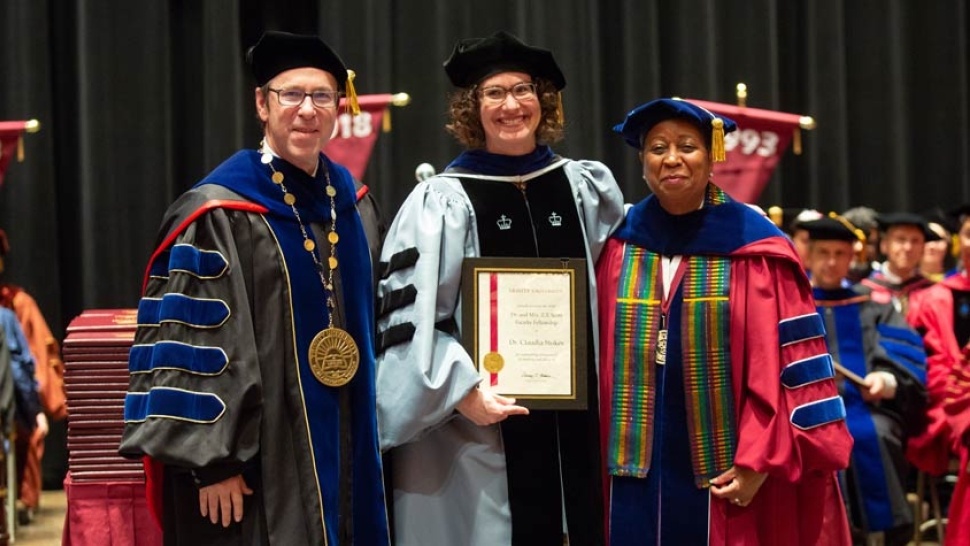 Claudia Stokes, professor and chair of English at Trinity University, has been named the 2018 recipient of the Dr. and Mrs. Z.T. Scott Faculty Fellowship in recognition of her outstanding abilities as a teacher and mentor.

The Z.T. Scott Fellowship includes a cash award to be used for professional development and research. Trinity University Trustee Richard M. Kleberg III established the Fellowship in 1984 in honor of his grandparents, Dr. and Mrs. Z.T. Scott. The award, announced May 12 during Trinity’s undergraduate commencement, is the most prestigious faculty award the University bestows.

Stokes, whose field is the study of American literature before 1900, recognizes that her courses often deal with what she describes as dreary subjects and texts but takes on the responsibility of enlivening the works to clarify how deeply important they are. She believes that writers such as Ralph Waldo Emerson or Harriet Beecher Stowe help Americans see the origins of culture, discern the nation’s fundamental values, and recognize the motivations and biases that underlie them.

She tells students that writing well is one of the important aspects of an education. While Stokes champions high-achieving students, she also advocates for students who struggle because of illness, trauma, or for any reason. She has taken students and even one alumnus into her home temporarily when they had no place to go.

Sophomore Kristina Reinis ’20 was a high school senior touring Trinity when she met Stokes. During her visit, Reinis was struck by comments Stokes made about the high schooler’s thesis, along with the fact that the professor offered direction, sending her sources and contacts for the paper and meeting with her four times. Reinis ultimately enrolled in Trinity and notes, “This dedication shows that Dr. Stokes not only has a passion for helping Trinity students, but all students.”

One of her colleagues, Victoria Aarons, the Mitchell Distinguished Professor of Literature, describes Stokes as “a really smart scholar, an inspired writer and thinker, (and) a deeply committed instructor and advisor, (who) has done important and influential work in the profession and at Trinity.”

Outside of Trinity, Stokes is a Trustee of Temple Beth-El and co-chair of the San Antonio Hillel Steering Committee. She also is a past chair of the American Literature Society and served on the editorial board of ESQ: A Journal of the American Renaissance. She was a summer 2016 Fellow with the National Endowment for the Humanities and won the Florence Howe Award in English from the Women’s Caucus of the Modern Language Association in 2015.

Stokes arrived at Trinity in 2001 and has chaired the English Department since 2014. She holds a doctorate in English and comparative literature from Columbia University, two master’s degrees from Columbia, and a bachelor’s degree from the University of Michigan at Ann Arbor.