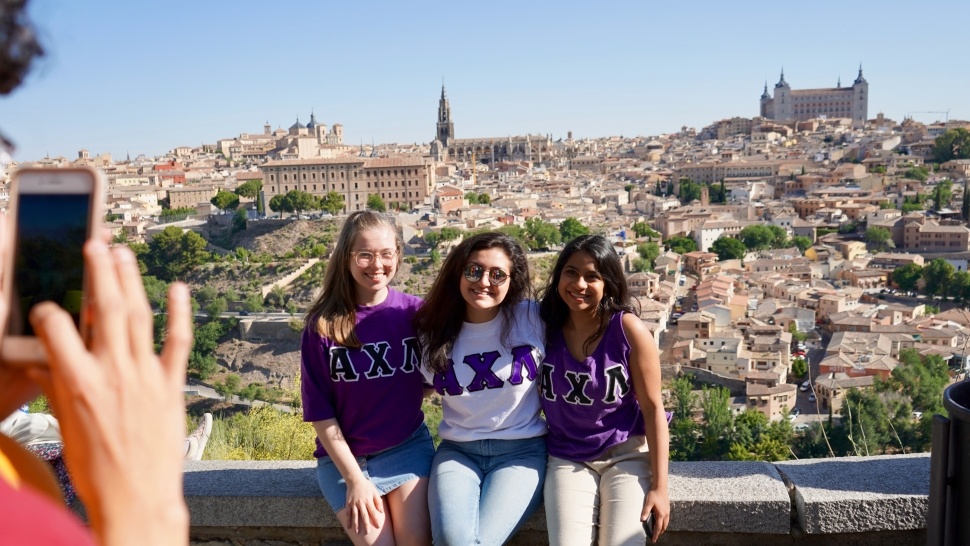 At first, Alanna Jaffee ’21 was petrified at the idea of going abroad.

But at Trinity’s annual Summer in Madrid program, she found a perfect space to explore without fear.

“I didn’t know what to expect going into Madrid, but it’s been better than I could have imagined,” Jaffee says. “Now, I don’t want to leave.”

Trinity’s Madrid program, a challenging but rewarding six-week journey into the heart of Spain, has been opening new doors for students like Jaffee for more than a decade. The program is run by the Center for International Engagement in partnership with the University’s Mexico, the Americas and Spain program (MAS), and engages students through classes and workshops led by Trinity faculty. This includes trips to explore cities across Spain, and most importantly, guaranteed internships at nonprofits and businesses in Madrid.

Not only did Jaffee find her international footing at the program, but she also discovered the strength to make a global impact. She spent her summer working for the NGO Asociación KARIBU, where she helped African immigrants—who speak mostly English and French—navigate Spanish society.

“These are people who come to Spain with next to nothing, looking for a better life,” Jaffee says. “And seeing a country outside the U.S. deal with the same migration phenomenon, this just gives you a whole new perspective on immigration. This is an experience…so beyond what you can get in a classroom.” 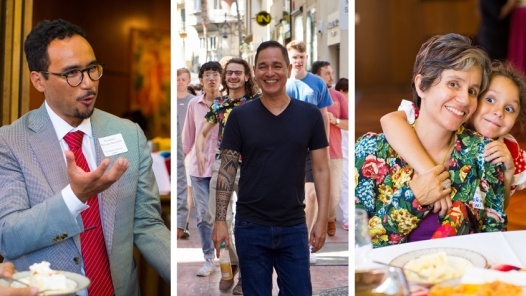 That lesson? No pain, no gain.

“Real growth happens between panic and comfort: If you’re too comfortable, you don’t grow. But if you’re pushed too far, you panic,” Nishikawa says. “So in Madrid, we’re putting students like Alanna in difficult situations, but we think that’s good medicine for them.”

In Spain, Jaffee and her classmates encountered a packed schedule: they spent their weekdays working at internships from 9 a.m. to 2 p.m., while two days per week, they also had class led by Trinity faculty in the afternoons. On weekends, professors Bladimir Ruiz, Rosana Blanco-Cano, and Nishikawa led students on trips to other parts of Spain, such as Toledo, Malaga, Asturias, and Salamanca, all accessible by bus and train. The rest of the time, students were free to explore Madrid on their own.

But the internships remained the centerpiece of each students' voyage. These internships are particularly challenging because students like Jaffee have to prove to their employers that they can handle high-level work, while also doing that work entirely in Spanish.

“Our students have to rise to the occasion,” Nishikawa explains. “They’re not just going to waltz in on day one and expect to be on the phone with CEOs making international deals in Zurich—they have to earn everything.” 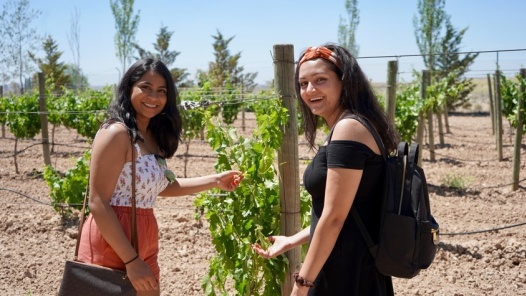 When Jaffee arrived at Trinity, she knew she wanted to study political science and Spanish.  But at the University, she discovered an application for these two fields: immigration law. Now, she wants to reach law school after graduation and is hoping to one day use her degree to help vulnerable communities.

A native of Plano, Texas, Jaffee has always enjoyed speaking Spanish, and also has a passion for helping people who are “fighting against the odds.” At Trinity, she found more than a strong pair of programs in Spanish and political science: she’s also gotten involved in the Spanish-speaking community of San Antonio, and is always looking for opportunities to work with populations that are affected by immigration law.

But while Jaffee’s experience with immigration has been largely framed by the experience of seeing Spanish-speaking immigrants adjust to life in largely English-speaking Texas communities, the Madrid program gave her the opportunity to see what it’s like for those tables to be turned.

In Madrid, Asociación KARIBU helps African immigrants—who speak mostly English and French—become a part of a Spanish-speaking society. The organization provides people with food, medicine, and even metro cards to use public transportation. 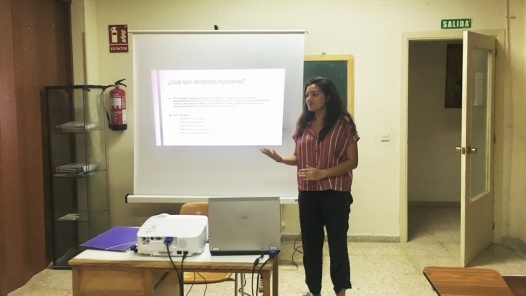 KARIBU has 11 locations throughout Madrid, where Jaffee was assigned to a women’s center, where she did “a little bit of everything.” In a twist from Jaffee’s experience in Texas, she found many immigrants coming to Spain already speak English, but not Spanish. So, she provided a unique ability to help translate.

“To see these 15 women living in a home together, learning a new language and customs together, it’s eye-opening,” Jaffee says.

Nishikawa says Jaffee’s Madrid experience will be more than a line on her resume: She’s now empowered to speak from a unique perspective on complex issues like immigration.

“It’s great for her to see how other countries approach immigration policy, because sometimes, you have to step outside of the U.S. to see things differently,” Nishikawa says. “When Alanna becomes someone who’s contributing to immigration policy in the U.S., she’ll be able to say, ‘look, I’ve seen how another country with this same challenge has faced it, and these are the ways it was better, and this is how it wasn’t.”

“This is redefining what Alanna knows is possible,” he adds. 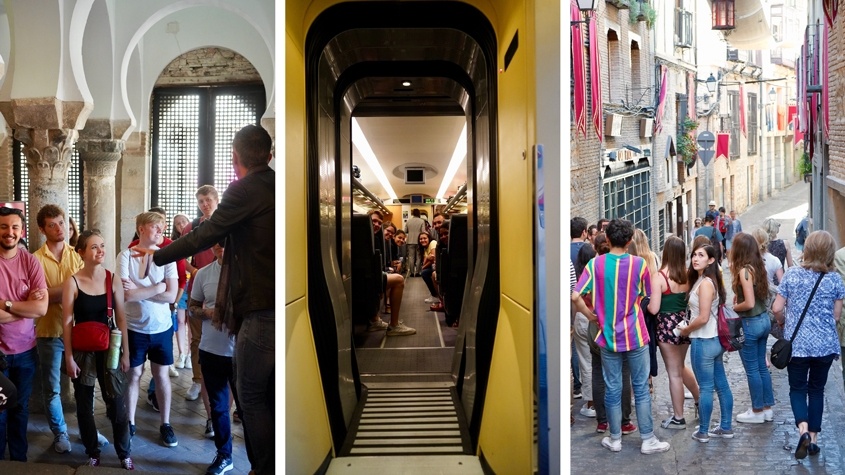 Jaffee’s Madrid experience is also shifting the way she thinks about her future career.

Whereas she had previously only seen private practice as an option for a legal career, now Jaffee has discovered a passion for an alternate track. “One day, if I were to have my own firm, the people who would really need my help might not be able to pay for it,” Jaffee says. “So this has made me consider more nonprofit work, more NGO work. It’s completely shifted my perspective on what I want to be doing in the future, and I’m so glad I have that knowledge now.”

That perspective has also shifted thanks to mentorship from program leaders Ruiz and Blanco-Cano, both modern languages and literatures professors.

“Spain is changing all the time, and that’s the reason why this is a perfect location for Tigers to learn about interculturality and innovation,” Cano explains. “We are interested in our students taking these types of internships because they learn "real" Spanish: colloquialisms, vocabulary, and expressions that could be found in the workplace. A classroom will never replace this type of experience.”

“There’s a hole in the workforce for employees who can help companies realize international ventures,” he says. “If you ever have to prove in an interview that you can adapt, or if you’re ever asked, ‘would you work abroad?’ Trinity students can point to an experience like this as definitive proof.”

In the grand scheme of things, six weeks in Madrid isn’t going to define Jaffee’s college experience. She’ll return to San Antonio, spend two more years in school, and then graduate into a lifelong series of new adventures.

But Nishikawa says Jaffee will be feeling the effects of the Madrid program for the rest of her life.

And apart from all her new language, critical thinking, and professional skills, Jaffee says her biggest take-home from Madrid is a new sense of fearlessness.

“That’s the biggest draw of this program for me, Jaffee says. “You learn that you become a better explorer when you can explore without fear.” 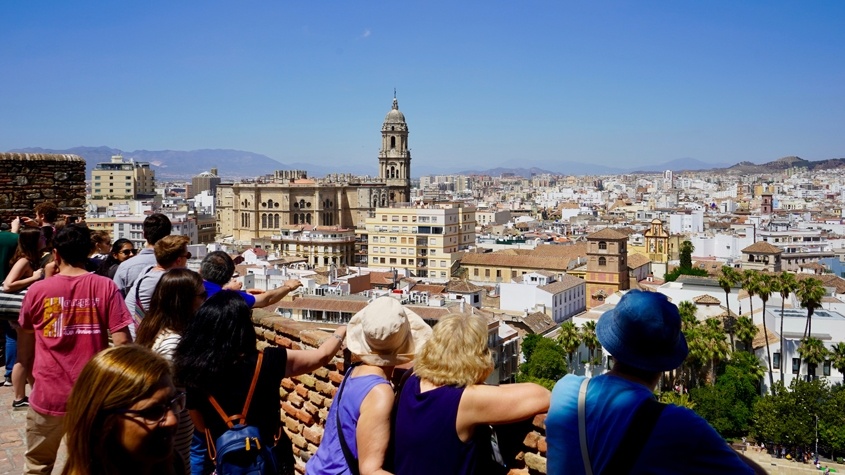