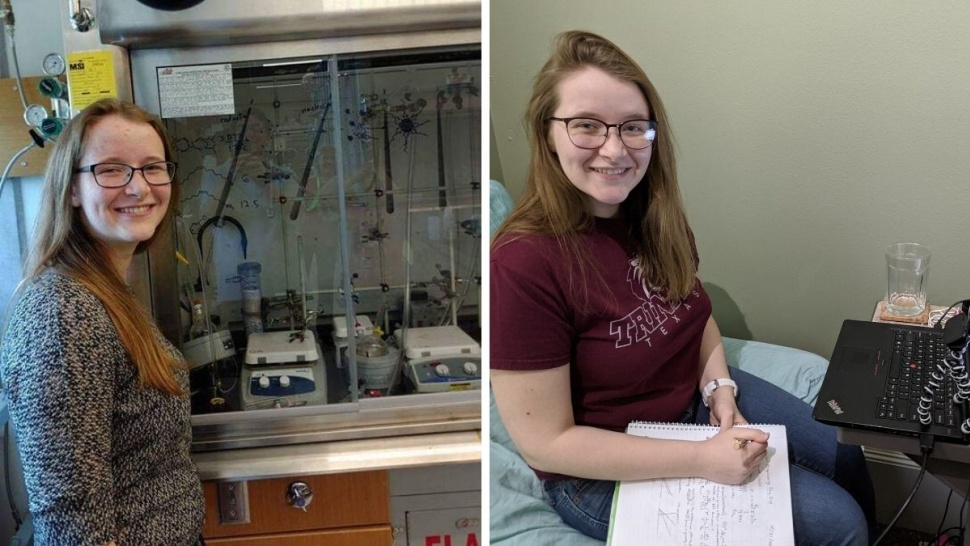 I received the email that Trinity would be shifting to a remote system only minutes after arriving home in Dallas with enough clothes for a 4-day visit and almost none of my schoolwork and supplies. Since then, I have managed to get my hands on a few more shirts and most of my schoolwork, but I am staying away from my school and my friends for the rest of my final semester at Trinity. I’ll be graduating in May with my BS in chemistry, just a few weeks from the time of writing this, but commencement seems unreal as I finish up my work away from final traditions. I suppose I did have a last concert with choir, a last time spent in my research lab, a last performance with the Acabellas, but I do feel robbed of knowing that they were my lasts. Much of my coping with the change has been in finding the ways in which my final traditions still get to be a part of my senior experience.

I’ve been a part of the Chamber Singers at Trinity since my freshman year and have really found a home in that group. One thing I know every member of choir is missing right now, freshman or senior, is the five hours a week that we sing together. There is something really magical and therapeutic that happens when you sing together with a group of people that you care a lot about. A lot of the members have been meeting remotely once a week, and I find a lot of comfort meeting with the group, even if it is tricky to make music together live due to lag and synchronicity issues. We were also lucky to be able to sing together separately in our virtual performance of Blake Henson’s “My Flight for Heaven,” which I have been playing on repeat since it was released. With the choir I feel very lucky that some of our opportunities for later this year, particularly our trip to New York City to sing at Carnegie Hall, have been pushed to November, where I might be able to rejoin my friends for another chance to sing with them. 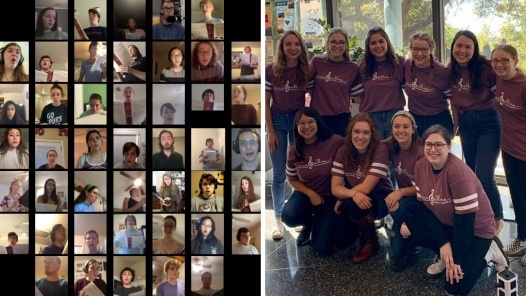 Allison says she will miss singing with the Chamber Singers (left) and the AcaBellas (right).

I’ve been a part of the Acabellas, Trinity’s treble acapella group, for two years now, and of course we have had to cut our rehearsal and performance schedule this year short as well. The combined loss of rehearsal schedules of Chamber Singers and Acabellas has really left me with way too much time on my hands. Even with the rest of my schedule remaining largely unchanged, hours of obligations have disappeared every week. I’ve found that reserving the hours that I would normally have rehearsal with some other creative endeavor has helped me retain the relaxing break from the rest of my day that my music groups usually grant me. Typically, the Acabellas have a final big concert with the Trinitones which would include a “Senior Song” featuring our graduating members. I remember that the loss of this song and final moment to sing with this group surprised me as one of the things that hit me the hardest right at the beginning of the major changes that go along with this virus. We have since decided that, taking inspiration from Trinity’s choirs, we are going to put together a virtual Senior Song for myself and the other graduating senior in the group.

The strangest change to my educational routines has been in access to Trinity’s laboratories. For both lab classes and student research, I’ve spent a huge hunk of my time for the past four years in one lab space or another. The chemistry students affectionately call CSI our second home with the amount of time we spend there during the school year and during summer research. The junior and senior chemistry labs are all held in the “Super Lab,” which has a dedicated write up space for declared chemistry majors. My junior and senior year, more study hours and meals have probably been spent in that write up space than any other place on campus. The Super Lab is an intensely collaborative space–it is almost always occupied by a few students, and losing that comradery has been even stranger than losing the ability to do experiments. My workspace now does look a little different from the lab; I’ve temporarily reclaimed my Dad’s storage space as my bedroom and workspace for virtual lessons. I’ll be back in a lab at graduate school in the fall, but I know Trinity’s spaces and people will always hold a fond place in my heart and I’ll miss them.

Watch the Trinity Chamber Singers perform "My Flight to Heaven" and other virtual Trinity music recordings on YouTube.

Allison St. John '20 is a chemistry major from Allen, Texas. She is pursuing a Ph.D. in chemistry at the University of New Hampshire.