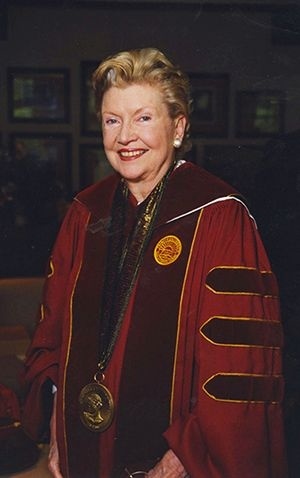 Born in Waco, Texas, Crichton moved to San Antonio in 1940, when her widowed mother married the Rev. Everett H. Jones, bishop of the Episcopal Diocese of West Texas. Crichton graduated from Sweet Briar College with a bachelor’s degree in European history.

Crichton actively served on Trinity’s Board of Trustees for nearly 40 years (1965-2004). Elected chairman in 1976, she was the first woman to chair the University’s governing board. During her two-year tenure as chair, she led the Board to develop a transition and succession plan, when Trinity President Duncan Wimpress decided to step down. The Board of Trustees lauded her significant leadership in a time of change for the University: “She managed the affairs of Trinity’s governing body graciously, patiently, and skillfully…she led the Board in the constructive resolution of a succession of institutional problems and challenges.”

In addition to her contributions of leadership and service to Trinity, Crichton was a generous donor to the University. Her family’s estate helped to endow the Everett H. Jones Chair of Campus Ministry, held by Trinity’s chaplain. Her support also benefited undergraduate students in the form of scholarships and augmented resources for Coates Library.

“Mrs. Crichton created a rich campus tradition of intellectual opportunities on our campus, a legacy that has greatly enhanced the value of a Trinity education,” says Trinity President Danny Anderson. In 1999, Crichton received the University’s highest award, the Distinguished Service Award.

An active community volunteer, she served on numerous boards of civic, arts, and business organizations, including the executive committee of the San Antonio World’s Fair: Hemisfair ’68. During that time, she made a gift to the city of San Antonio of the mural "Confluence of Civilizations" by Juan O'Gorman of Mexico. The 130-foot-by-22-foot mural is located on the facade of the Lila Cockrell Theatre. With the recent redevelopment of Hemisfair Park, the mural is enjoying new visibility, and Hemisfair Park a number of large new trees, courtesy of Crichton’s generosity.

Crichton was also active on the state and national political scene, serving on the Republican National Committee, the Bush-Quayle ’92 National Finance Committee, and as vice chairman of the Texas Republican party. She served as the U.S. delegate to the conference for the Inter-American Commission of Women (Organization of American States), as a consultant to the Department of State in the Bureau of Inter-American Affairs, and as an adviser with Vice President Nelson Rockefeller’s fact-finding mission to Latin America.

“I have a great love for San Antonio and Trinity University, and see the chairmanship as a challenging opportunity,” said Crichton in 1976. “I hope that I am able to contribute as greatly to the institution as my predecessors.” Flora Cameron Crichton’s extraordinary contributions of time, counsel, and resources to Trinity University certainly indicate that she succeeded.

A private service for Mrs. Crichton was held with family members. In lieu of flowers, the family suggests memorials may be made to a charity of your choosing.