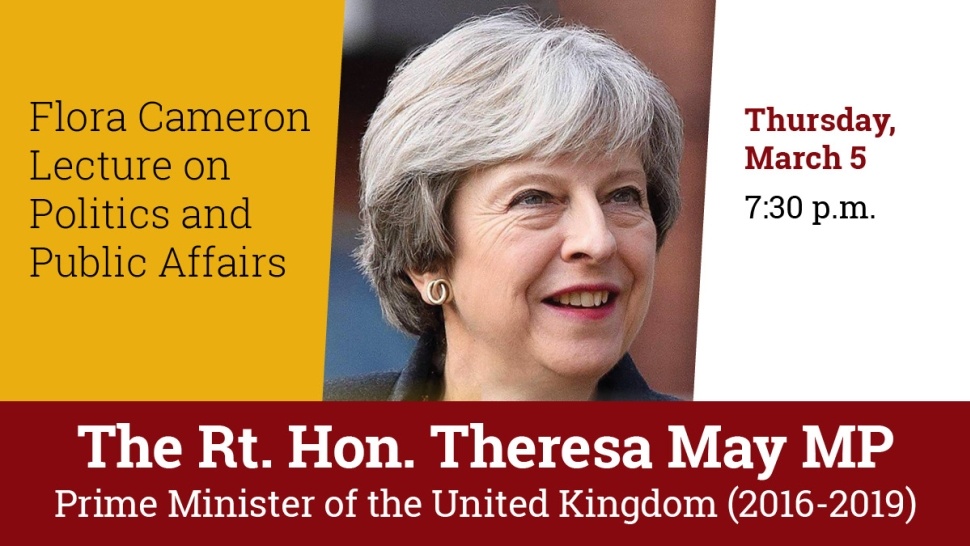 Theresa May, former Prime Minister of the United Kingdom, will be the featured speaker at the 2020 Flora Cameron Lecture on Politics and Public Affairs on Thursday, March 5, at 7:30 p.m. This event is free and open to the public—tickets are available at the Laurie Auditorium Box Office. For information, contact Sandra Hernandez, ticket office coordinator, at shernan4@trinity.edu.

Appointed Home Secretary in 2010, May made history by becoming the longest-serving Conservative Home Secretary in the past 100 years. During this time, she oversaw reductions in crime, reform of the police, and the introduction of the landmark Modern Slavery Act. In 2005, May co-founded Women2Win, an organization dedicated to increasing the number of conservative women in Parliament and in public life.

As Prime Minister, May led negotiations with the European Union after the country’s historic Brexit referendum. She also oversaw the largest ever cash boost to the U.K.’s National Health Service and the largest expansion of mental health services in a generation. She launched a 25-year environment plan and introduced legislation to end the U.K.’s contribution to global warming entirely. May also established the first Race Disparity Audit to shine a light on injustices and published a Modern Industrial Strategy to ensure that the jobs of the future are created across the whole country—not solely in London.

During her time at 10 Downing Street, the U.K.’s national debt fell, there were more people in work than ever before, and taxes were cut for 32 million people.

The Flora Cameron Lecture on Politics and Public Affairs is made possible by an endowment gift from the Flora Cameron Foundation. The lecture is free and open to the public. Due to an anticipated large turnout for this event, tickets will be required for admittance. Tickets will be offered at no charge.