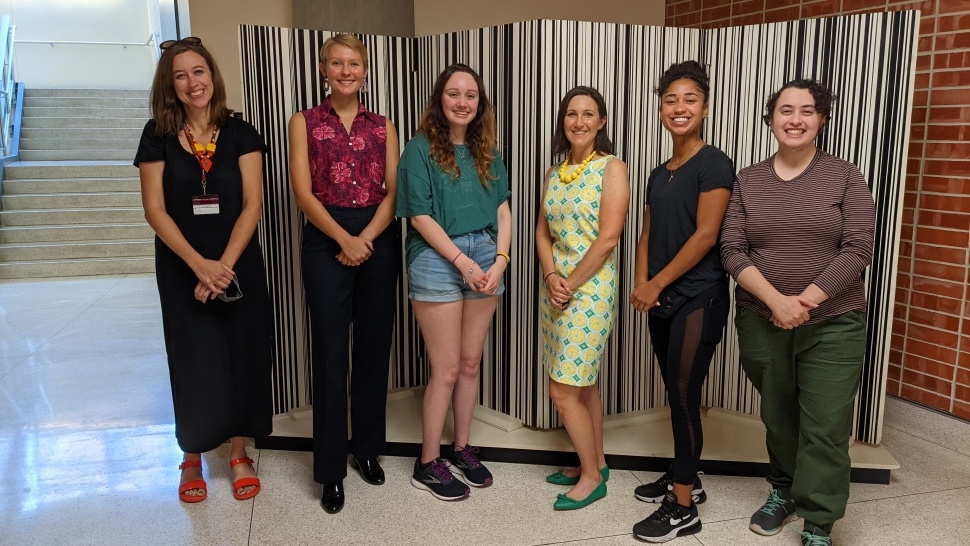 While many students may run away from school the moment finals end, four Trinity University students used the summer of 2021 to dive headfirst into the University's past.

Thanks to the Trinity University Mellon Initiative Summer Institute, Zoe Grout ’22, Samantha Henry ’22, Ardi Saunders ’22 and H Walker-Tamboli ’23 spent the past few months contributing to the Trinity University Women’s Intercollegiate Athletics (TUWIA) History Project. This project aims to highlight the experiences of women student-athletes at Trinity, especially in the decades after the landmark Title IX passed in 1972. 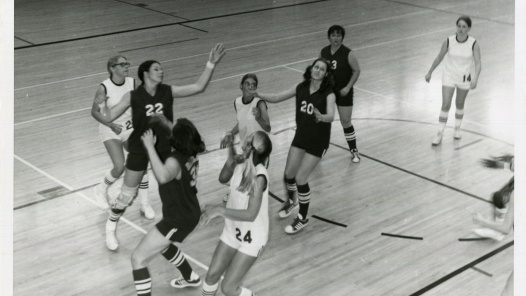 “What drew me to this project was my connection to the idea. I am a student-athlete with an anthropological background, so I had a perspective that could contribute to the project,” says Henry, who is also a member of Trinity’s women’s basketball team.

The TUWIA History Project officially began in 2015. That’s when Shirley Rushing Poteet, a former physical education instructor at Trinity, Professor Emeritus Doug Brackenridge, and Betsy Gerhardt Pasley ’77 teamed up after an inquiry from Peggy Kokernot Kaplan ’75 into history about the first women’s track team at Trinity revealed a lack of statistics available online for teams before the 1990s.

“[Doug] stopped me one day and said, ‘Betsy, we’re thinking of doing a project to try to capture what happened with women’s sports at Trinity,’” Pasley says. “As soon as Doug said that, I just immediately thought, ‘This would be a heck of a lot of fun.’” 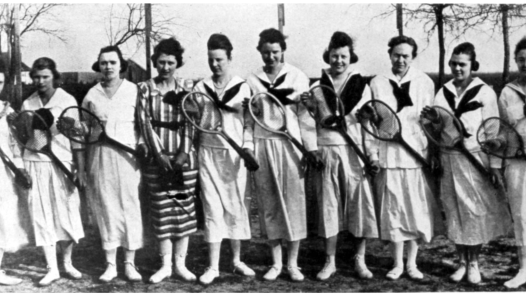 Archives and Interviews and Exhibits, Oh My!

After Poteet, Brackenridge, and Pasley started the project, Grout, Henry, Saunders and Walker-Tamboli expanded upon the team’s findings by creating digital exhibits that reflected the inequities women athletes faced on campus. The students produced a directory of intercollegiate sports teams involving women from 1973 through 1999 and a timeline of women’s athletics at Trinity.

According to Grout, who took the lead on creating the timeline, deciding which events across several decades were substantial enough to highlight proved to be a tough task.

“It was really difficult because you're having to decide, ‘I think this is most important,’ but it's just me. I feel like I'm the one writing history,” Grout says. 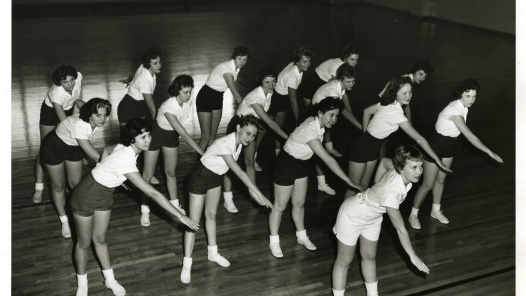 Along with the directory and timeline, two exhibits titled “Home Field Disadvantage” and “Playing Outside the Lines” explore the inequities women athletes faced and how Title IX along with playing in Division III impacted women student-athletes at Trinity. Mellon funding was also utilized to transcribe and make accessible 25 oral history interviews conducted by Pasley, Brackenridge, and Poteet.

“You'd think that 25 hours of oral histories would be absolutely daunting, but you just get to hear about people's lives, and in a strange way it felt like a family reunion because [I] got to hear about them from birth to what they are doing now with things that they really love to talk about, these little niche stories,” Saunders says.

One of the oral history interviews conducted was with Julie Jenkins, head volleyball coach at Trinity. Jenkins, who is in her 37th season at Trinity, became the 10th coach all-time and the second woman ever across all NCAA divisions to reach 1,000 victories with her victory this fall against Centenary College (LA). For Saunders, listening to her oral history made Jenkins—a Trinity legend—seem like a close friend.

“I saw Coach Julie Jenkins a few days ago…. [and] I just felt like I knew her in a way that I wouldn't if I just passed her on the street, so it was a very personal phenomenon,” Saunders said. 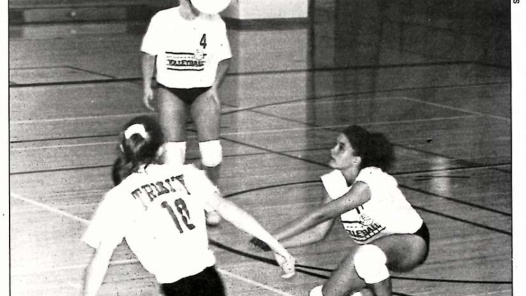 The group of student researchers consisted of two student-athletes—Saunders from the cross country and track & field teams, and Henry from the women’s basketball team—along with two non-student-athletes. Having this balance between those familiar with sports and those not as familiar helped bring various perspectives to the project.

“I don't know much about sports, but I do know about women,” Grout says. “I thought it was really interesting to start to think about those stories and how they intersect with the history of feminism and the history of the United States, so it was just a really good fit.”

On top of diverse perspectives, every member of the group also brought unique skills that aided the research from start to finish. For example, Walker-Tamboli charged ahead with many of the nitty-gritty processes that require lots of time and patience such as scanning images, converting them into the right files, and inputting the metadata to ensure every detail is noted correctly.

“It was nice to just get to sit down, work with the data, and just be able to be detail-oriented and really precise about it,” Walker-Tamboli says. “That was also kind of fun because you would always be missing some information, and you would have to go hunting through old books and photos to find it.”

Abra Schnur, University Archivist, served as a mentor for the students alongside history professors Lauren Turek, Ph.D, and Carey Latimore, Ph.D. Schnur interacted with the students on a daily basis and was the go-to person for most questions about the research process in general.

“My main goal was to train them on how to utilize a lot of the archival resources that we had available such as the Trinitonian and Mirage database. We did trainings on working within the closed stacks of the archives, so how you pull files, how you try to maintain original order when you're looking through a file so you don't mess anything up or you mis-file something,” Schnur says.

According to Schnur, it was easy to see the drive the students had to work on the project despite the often tedious research process.

“I think it really resonated with them, especially for the athletes, to see how the challenges have evolved and how they've remained the same over the decades,” Schnur says. 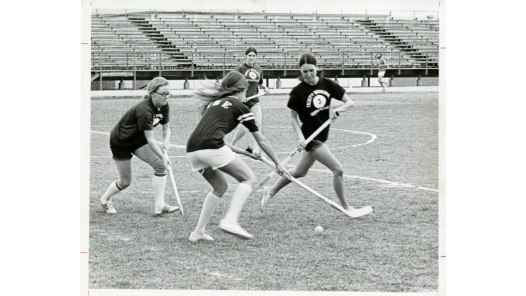 Combing through old copies of the Trinitonian and the Mirage was critical for the students, as these were often the only pieces of history left to tell the stories of decades past. For Pasley, a former sports editor of the Trinitonian, seeing her and other journalists’ work reexamined as documents of history added an extra layer of appreciation to all the work she did when she was a student at Trinity.

“There was no concept that somebody would look at this 50 years later,” Pasley says. “Whether it appears in print or digitally, words matter.”

For Henry, looking back at those words and getting a sense for what women student-athletes once dealt with at Trinity makes her appreciate the opportunities she’s been given to compete today.

“My biggest takeaway is that pioneer women truly fought for women like myself to be able to compete in sports at a high level today. Without their fight, strength, and empowerment, women's sports would not have achieved the success that it has,” Henry says. 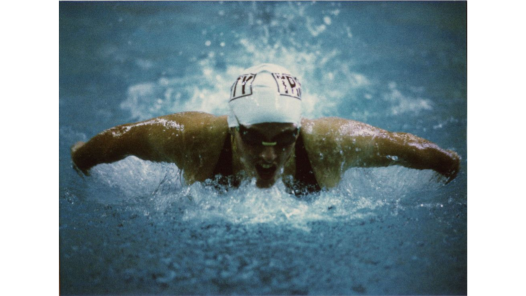 A Trinity swimmer competing in a meet, circa 2000. Photo courtesy of Special Collections and Archives, Coates Library.

As for the larger TUWIA History Project, these new online exhibits will soon be joined by a book capturing Trinity’s 150-year women’s sports history that Pasley has been writing. Trinity University Press is partnering with Pasley to publish the book, with the hope of having it ready by Alumni Weekend in October 2022, which happens to also be the 50-year anniversary of Title IX.

“Now, instead of just kind of plugging along and having faith, the good news is we've got a publisher, and I'm really thrilled it's going to be Trinity [University Press],” Pasley says.

Beyond the excitement of getting published, Pasley believes the combination of her book along with the students’ research will be a unique way to make these projects into living documents.

“Usually a book is something that you wrap up, you tie a bow, and then it's done. If you want to add something or continue a conversation, you can't. In this case we already have the Playing Field, and that's going to be a great repository for the things I'm going to have to cut out of the book,” Pasley says.

The online exhibits will also provide readers of the book with a chance to provide their own anecdotes to help bring as many stories from all perspectives and decades to light.

“In the book, we know that we're inadequately covering substantive issues of diversity, like the African-American women who don't even show up until the ’90s in our story, as well as the LGBTQ community,” Pasley says. “We want to hear more of these stories. We want to continue to flesh out these really important stories of the women who had to face those kinds of issues. ”

Henry agrees that whether it’s digitally or in print, the story of women student-athletes at Trinity will hopefully live on forever.

“This exhibit is meant to be ongoing for generations of Trinity women athletes to continue to contribute to,” Henry says. “If anyone has any information they feel should be heard for this project, we encourage them to reach out and let us know.”

Explore the TUWIA History Project at playingfield.coateslibrary.com, where you can also contribute your own items to the collection or contact the research team with any questions.