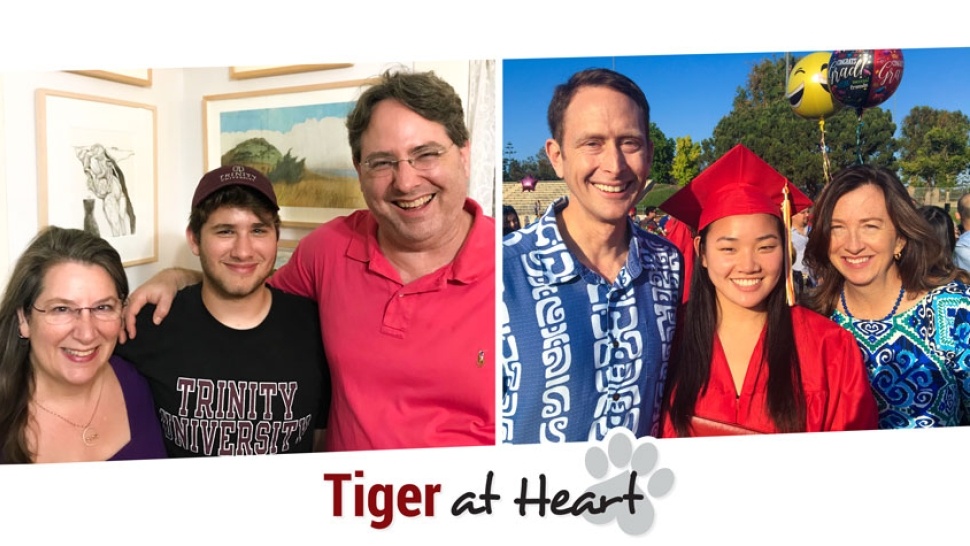 This year, 33 incoming first-year students have at least one parent who attended Trinity, the most in recent years. For some lucky few, both parents are Tigers. That includes Mariel Clark, the daughter of Matt Clark ’92 and Margery Arnold ’90, and Nathaniel Hajovsky, the son of Martin Hajovsky ’87 and Theresa Gregory ’85. Get to know these pairs of Tiger parents, eager to pass on the #TigerPride to their incoming first-years.

How did you and your spouse meet?

Matt Clark (MC): There are a few versions of how we met. The first version is that in the first semester of my first year, Margery and I “met” as opposing team members in a hard-fought intramural inner tube water polo game. Margery was on the RAvenge team, I was on the team for my first year dorm, Winn. The (big, mean) RAs crushed us (and they weren’t very good sports about it).

The second version is that we met at a (Kappa, I think) party at a house on Mistletoe the day before the start of second semester of my first year. Undoubtedly, I introduced myself with a classy line like, “Uh, do you want a…beverage?”

Martin Hajovsky (MH): We met at Trinity in Dr. William O. Walker's Introduction to Religion class in the fall of 1984. We were both religion majors, and the class was one of the few required courses at the time. The two of us got to know each through class comments and questions well enough to make up a study group for the class (Theresa also thought I had great legs in my cut-offs). We dated for a couple of weeks, during finals, (when many a Trinity relationship is begun?) after a Charlie Brown & Grinch party in Theresa's North Dorm suitemates' room and the Christmas Jazz Band Concert. After that, we took Mackenzie Brown's Mysticism and Monasticism class that spring, Theresa's last semester. Three years later, we re-met, were each living in apartments off Shook Drive, and briefly dated again. However, we did not get together (and stay together) for another six years after that. That's a Trinity experience for you. You just never know when a connection will take root, or on what path that connection will lead you!

What was your favorite memory at Trinity?

MC: Wow, I have many great memories from Trinity. My favorite is that I went through ROTC when it was offered here. For one of our early morning runs, we were doing laps at the track around the football field. It was EARLY, and we were enthusiastically calling cadence. Sadly, this awoke some of our classmates and one particularly assertive (and attractive) RA. This RA confronted our group leader, Steve (a close personal friend), and gave him the absolute “what for” in light of our inconsiderate behavior. Perhaps this RA was making an example of Steve to make a point to other members of the running group? Hmm...

MH: My favorite moment at Trinity (other than meeting Theresa) came during the snowstorm in January of 1985, right before classes started. Walking back to my dorm after a late-night Dungeons and Dragons game, the entire campus was still covered in a blanket of the white stuff, which by then had acquired an icy sheath on top. I was all by myself at what must have been 2 or 3 a.m., crunching through the ice and snow. Looking around and listening to that absolute stillness was a memory I've always treasured. I never saw the campus look more beautiful.

Theresa Gregory: The wide-ranging conversations with most anyone are still my favorite moments. Our senior year, Lizzie Bristow ’85 (happily married to another alum, Pierce Krouse ’85) and I would meet art professors Bill Bristow (Lizzie's father) and Phil Evett for Thursday lunches in the old Sub for stories, terrible puns, awful jokes, and whatever else we brought to the table to share. In my experience, these lifetime connections and conversations can be (and have been) dropped for years and picked up in an instant with all the heart and humor of earlier times.

What was your reaction when learning your student wanted to go to Trinity?

MH & TG: Nathaniel grew up visiting the campus, as we were in San Antonio frequently when he was younger, so he was no stranger to Trinity. He toured the school as a high school junior in 2016 and was ready to apply right then and there. We were thrilled at the prospect but wanted to make sure he knew it was the right option for him. We told him that he'd never hear a bad word about Trinity from us, but he had to investigate other schools also, just to be certain. He eventually applied to several other great schools, but when he got word of his acceptance to Trinity, it was all he needed to hear. We were quietly delighted that he saw many of the same benefits and opportunities that we enjoyed. We are also grateful to see how well Trinity has maintained many of the same elements we loved, while growing and developing its relevance as an institution.

Do you already see any coincidences forming between your time at Trinity and your student's upcoming time?

MC: Mariel will be living in the same general area (Witt/Winn) that I lived in my first year, which is very cool. She has absolutely no desire to follow my major (history) as far as I know.

MH: Nathaniel's process is very different from ours already. He has had a great deal of contact from the university this summer, from writing and reading assignments, mailings, etc. We had relatively no contact (except for billing, of course!), and were very much on our own on move-in days. Check in at Witt Reception, get your keys and a map, go unload, and meet your roommate(s). Someone, an RA or mentor, would be along to tell you more information later.

One thing that is similar is that, like his dad, Nathaniel will spend his first year in Witt-Winn! I was on the first floor of what was then an all-male dorm, while Nathaniel will be on the second. We do see another similarity in Nathaniel's interest in a broad liberal arts curriculum. He has shown interest in many classes we would be happy to register for ourselves.

Have you given your student Trinity-specific advice?

MC: Soak up San Antonio—it is such a gem of a city, and I think it flies a bit under the radar for the rest of the country. It really is a special place.

MH & TG: One specific thing we have told Nathaniel is that Trinity is a place where you get to know your professors and they get to know you. This kind of experience allows someone to learn in a more intimate, education-oriented environment, and all Trinity students should take full advantage of that. We have stayed in contact with several former professors of ours over the years. When we tell people from other schools about that sort of thing, they are either dumbstruck or assume it was a graduate school thing, but at Trinity this kind of personal connection is a matter of course. It thrills us both as alumni that Trinity is this sort of "student-first" place, and as parents that Nathaniel is about to experience this first-hand.

Any favorite spots you're excited to visit when you come back to campus to move your student in?

MC: Two words: breakfast tacos. If there’s time and this fair-weathered Californian can handle the heat, I’d love to grab a bike and just wander around town. San Antonio has really changed since we lived there last (the Pearl, all the development near the Blue Star Arts Complex, etc.); it’s fun to take it all in.

MH & TG: We've already taught Nathaniel about several off-campus favorites, such as the Original Taco and Donut Shop and Cool Crest Mini Golf on Fredericksburg Road, as well as Liberty Bar, Chris Madrid's, and Taco Cabana. We've also recommended going on long walks with friends through the Monte Vista historic district and Olmos Park neighborhoods near campus. Though really, the place to get to know is San Antonio itself, one of our favorite cities anywhere. He knows the city better than we did when we arrived at Trinity, but he has much more to learn about it. As for on-campus, we've shown him many of our favorite spots, but mostly we're just interested to find out which ones will become his.

MC: We ended up living in the hometown of Lara Moore, a close friend from Trinity. Sadly, Lara passed away 15 years ago (I believe in July 2003) from lung cancer. I think of Lara often in light of our mutual connection to Irvine, Ca. Lara was very special, and I know she lives in the hearts of her many friends and her family.

Also, going to Trinity was one of the best decisions I’ve ever made (the best was marrying a former TU RA, but we’ve already covered that). I was very impressed with my fellow Trinitonians when I first met them, and my admiration for our Trinity friends has only grown over the years. I’m one grateful Tiger, and I would do it all over again in a New York minute.

MH & TG: The warmth of the red bricks and the clarity of the San Antonio sky is a physical reminder for us of the relationships Trinity fosters between students, faculty, staff, and alumni. It was an excellent place for the nurturing of our minds, bodies, and hearts. It also brought us a lifetime of friends and family. As Trinity alums, and especially now that we're Trinity parents, it's great to see the university thriving and in good hands. We could not be more proud of Nathaniel or our school.