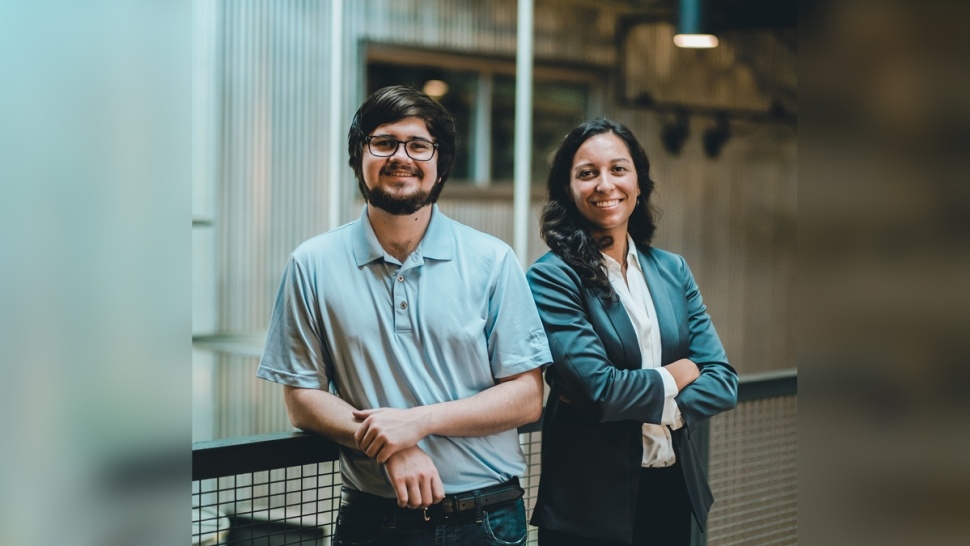 Whether you’re a casual hiker or an elite athlete, you can’t wait until thirst sets in to start hydrating.

But how do you accurately keep track of your water intake? You could purchase an expensive smart water bottle that tracks it for you. Or, coming soon, you could simply upgrade your existing bottle with a smart lid from Sapphire.

Sapphire, created by Tara Lujan ’22 and Zachary Taylor ’20, is a water bottle lid with patent-pending technology that tracks water consumption automatically and displays the amount of water you consume on a small screen on top of the lid. The lid also connects wirelessly to devices such as phones and smartwatches and will be compatible with major water bottle brands.

The product took home the $25,000 grand prize from Trinity’s annual Stumberg Competition this fall. Lujan, a business administration major from Austin, and Taylor, who majored in computer science and now works as a software engineer at the Jet Propulsion Laboratory in Pasadena, California, are both eager for their business to take its next steps forward.

“I’m relieved,” Lujan says of winning the competition, which is held over a preliminary spring round, a jam-packed summer accelerator phase, and then a final series of pitches in the fall. “The first few days, it’s a weight off your shoulders. But now there’s a bigger weight: We had plans for whether we won or we lost, but now that we’ve received this funding, we’ve got to put it to work. People are watching us—we have to keep the ball rolling. We have to make Trinity Entrepreneurship proud.”

Hydration has always been a passion for Lujan, a former soccer player who knows what it takes to compete in 100-degree temperatures. But Taylor—himself a former cross country runner turned avid cyclist—says Sapphire is more than a niche product.

“There are lots of niche, popular products in this space. But Sapphire isn’t competing with smart bottles,” Taylor says. “We’re the only retrofit solution in the market. So if you’ve already got a $50 dollar bottle you love so much that when you dropped it down the Grand Canyon, you hiked for four hours to go get it back—we let you keep that bottle, we just make it better.”

Students like Taylor and Lujan don’t typically cross paths in college. But at Trinity, the entrepreneurship program has a habit of making creative pairings.

The duo originally met through an anthropology class. That’s where Lujan originally brought up her goal to solve hydration problems she encountered on the soccer field. 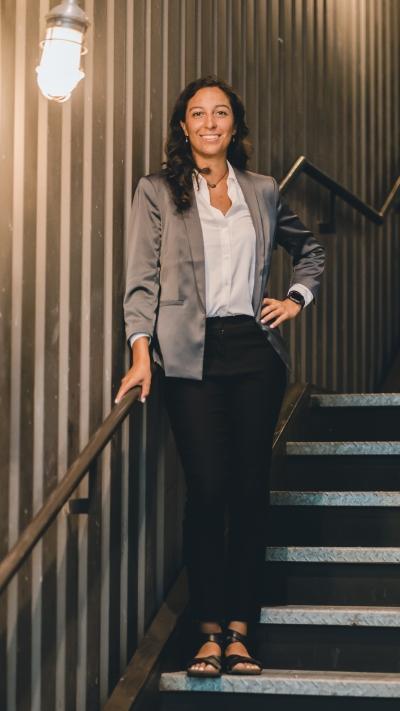 Lujan might not have originally known how to turn that idea into a tangible product. But at Trinity, entrepreneurs have a deep pool of talent and brain power sitting next to them in classes. Enter Taylor, who had many of the design and software skills Lujan needed.

“I thought we’d have to hire out engineering and software skills,” Lujan says. “But [Taylor] was someone who got a lot of that stuff done himself.”

And technical skills weren’t the only plus Taylor brought to the table. When he and Lujan met, Taylor was actually on his second run at Trinity—he’d originally left the University as a sophomore to work on a startup that didn’t pan out.

At Trinity, the mantra “safe space to fail” usually refers to students having the chance to learn from their mistakes in a sterile environment. But as Taylor will tell you, learning from mistakes in the real world is a different type of teacher entirely.

“I dropped out, moved to California, and failed big time,” Taylor says. “It hurt, and recovering was a long process. I came back to school, had to tighten my belt, and that’s not a fun experience. I hated that, and I didn’t want that type of experience again for myself or for Tara.”

Taylor even had prior experience pitching at Stumberg, where he’d previously failed to advance past the preliminary round with a different product.

“To be honest with you, I wasn’t excited about Stumberg 2020 at first, because I know how much work it involves,” Taylor says. “I have my full-time job, Tara is in school full-time. I knew we’d have to balance these commitments.”

In addition to all of Taylor’s technical skills and seasoned experience, Lujan saw a similar creative drive.

“If someone has that shared sense of entrepreneurial spirit—not everyone just wakes up and says ‘I’m starting a business today, let’s take a risk’—if you find a partner like that, they’re going to be constantly checking in on you, pushing you, supporting you,” Lujan says “That’s the environment at Trinity that I love.”

With the team now assembled, Taylor says, “we needed a goal, a product, that we could both get excited about while staying balanced.”

From the beginning, Lujan and Taylor had envisioned Sapphire as a “smart bottle.”

But, as the team discovered, that market was already tapped. Creating something unique, Taylor says, would be the key to developing a product that would succeed both at Stumberg and beyond. 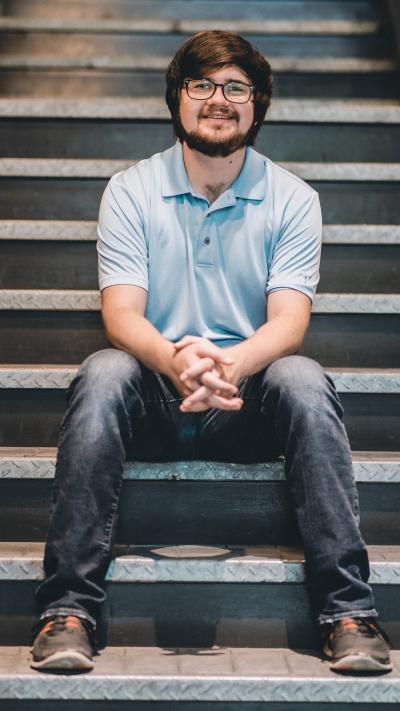 “Tracking hydration is not a hard problem, but it is a nuanced one,” Taylor says. “Some companies put sensors into the fluid, others use capacitive methods, so there’s a lot of different ways to accomplish the same goal. But with Sapphire, we decided to build something that’s different in how it determines the water level.”

The product’s unique tech—and the accompanying software that pairs with your phone and smart watch—means not just an improved product, but a more versatile one as well.

“We don’t rely on the physical properties of the fluid, so people can use this with different substances besides water, such as milk,” Taylor says. “We can track anything.”

This feature also made the product itself more flexible. “We started thinking, why make an entire bottle?” he explains. “We can be the first smart lid. And that’s both a design and a business choice. Now we can make one really good product that fits multiple bottles instead of having to custom-make different products.”

It also means the group will potentially be able to license the product to existing companies, rather than having to scale up independently, resulting in, as Taylor puts it, “us pulling our hair out before we’re 25.”

Armed with a plan, the group ordered sensors and electronics and started putting Sapphire together.

The team was fortunate enough to have completed much of the product’s ideation, development, and prototyping before the onset of the COVID-19 pandemic, but Lujan says she and Taylor still had to get creative to keep Sapphire moving forward in summer 2020.

“Everyone thinks working on your startup at Trinity means, ok, you go to the MakerSpace at the Center for the Sciences and Innovation, you sit on your laptop, research some stuff,” Lujan explains. “But now, working in a pandemic has actually freed up different parts of our time that actually makes us more efficient. I’m doing work during the day when Zach has his full-time job, but he is talking with me online in the evenings.”

The team also benefited from a $5,000 infusion of seed money from the Stumberg Competition’s opening round. All finalists get this funding in the spring, plus a spot in the summer accelerator program, which comes with ten weeks of additional funding for team wages and invaluable business and advising crash courses. So, since Sapphire couldn’t get back to the MakerSpace in summer 2020, the team was able to purchase their own 3D printer and do prototyping in-house.

But money isn’t the only type of support the group got from Trinity’s entrepreneurship program this summer. They still had to hone their pitch for the finals, which meant figuring out how Sapphire would pivot its business from direct-to-consumer to a licensing model.

“You can’t come to the Stumberg judges all wishy-washy and promise them all these different plans,” Taylor says. “You do need different plans, and believe me, we have plans A-Z for this product. But you have to pick one to pitch.”

Fortunately, teams like Sapphire have the support of an expanding entrepreneurship community program director Luis Martinez ’91 has built over the better part of the past decade.

In addition to in-house staff and faculty who are industry practitioners, the Sapphire team also relied on advice and wisdom from past Stumberg winners PATCH, Quick Sip Coffee, and LuxTurn.

“They all reached out and asked us to practice our pitch to them,” Lujan says. “We probably changed our presentation 10 times within a week’s span, just from all their feedback.”

Sapphire also took advantage of Trinity’s Venture Mentoring Service (VMS), which connects entrepreneurs to San Antonio mentors who help them promote the long-term growth and sustainability of the venture through objective business advice.

“This is a really competitive, really talented, really sharp team, and they have a great product,” Jones says. “I’m excited for them and I feel really excited about their direction.

Koslovsky feels Sapphire has a future even if they hadn’t won the Stumberg competition.

“One of the things I am very proud of is the fact that we discussed next steps for the project regardless of the competition’s outcome,” he says. “I believe their focus and commitment to making this project happen regardless of outcomes is proof of their work ethic and passion.”

“They’ve been a phenomenal help with us,” Lujan says of Jones and Koslovsky. “You get super actionable, unbiased advice from them. They told us to loosen our vision, enough to consider different possibilities.”

Right now, Lujan’s vision is set on honing the Sapphire prototype and preparing for beta testing.

“We want our product in the hands of users so we can get more feedback,” Lujan says. “Even if the feedback is not good, that’s OK. I want improvements.”

The group is also meeting with potential investors—a nerve-wracking conversation for any young entrepreneur. Fortunately, Taylor’s past experiences help them navigate these opportunities, he says, “because it’s a conversation I’ve had before.”

Ultimately, the path ahead leads to the Sapphire product in the hands of consumers. Whether that happens through a licensing deal or another pivot, Lujan says she can’t believe how far the product has come.

“Seeing our product in peoples’ hands is going to be fantastic,” she says. “As an entrepreneur, you have an idea, but making your product and seeing it work well—that’s everything.” 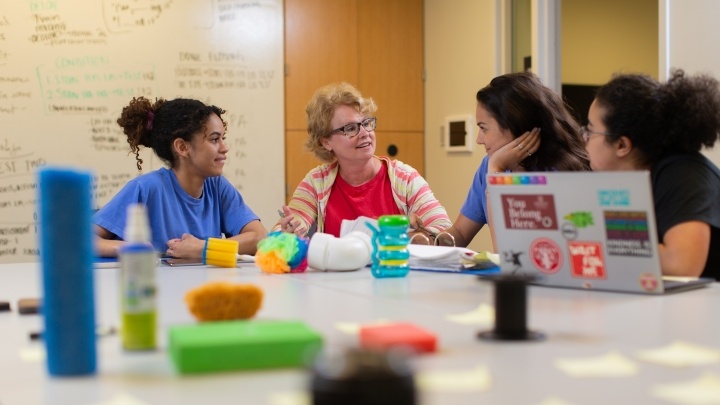 Thursday, October 20, 2022
At Trinity University, one of the most important questions our undergraduate…
Students
Trinity News 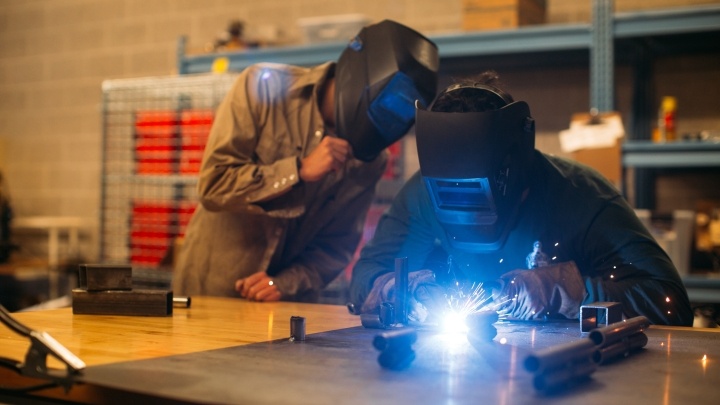 Engineering, Down to a Science