Title IX is 50! But don’t think “50 is the new 30” applies to this historic birthday. Considering how far women have come in education and athletics since 1972, we certainly can’t afford to go backward.

I hadn’t given much thought about those early Title IX days since injuries forced me to hang up my softball glove and running shoes. But my work the past few years on a Trinity women’s sports history project has provided newfound clarity to that long and sometimes painful journey.

What were those days like for aspiring female athletes? Aside from tennis, our other (non-scholarship) women’s teams in 1974 not only shared uniforms, but we had to wash them ourselves. The training and treatment facilities for men’s teams were inaccessible to the women. We often had to provide our own equipment. You could bend our skimpy running shoes in half. Our softball team didn’t have an on-campus diamond, so we practiced on a scruffy dirt patch by Thomas dorm and played our “home” games in Brackenridge Park. Also, coach Libby Johnson juggled three sports and taught classes on a meager paycheck. She wasn’t allowed to recruit, and most of her “prospects” had little experience, since hardly any schools hosted organized girls teams before Title IX mandated equity. 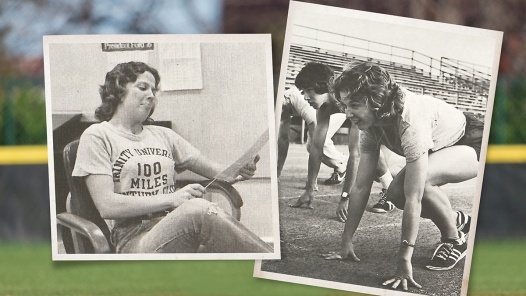 Betsy cheekily “appraises Playgirl magazine foldouts” and gets ready to race in the 1977 and 1976 Mirage yearbooks, respectively.

Of course, few knew of our plight because media coverage of women’s sports was sporadic or nonexistent. In my sports editing jobs for the Trinitonian and Mirage, and later as the first female sportswriter at the San Antonio Light, I tried my best to level the publicity field. It wasn’t easy.

Don’t get me wrong—we players had a blast thanks to coaches and administrators such as Johnson and Shirley Rushing, who shielded us from the rancorous Title IX conversations. While they were fending off doomsday predictions of the end of men’s sports, they always found a way for us to play.

Also unknown to us was the administration’s debate over the choice posed by Title IX. Should Trinity adopt the commercial “win at all costs” philosophy of Division I with athletic scholarships, or instead take the path of a balanced academic/athletic student experience? Texas schools like St. Mary’s and A&M went the competitive route, but Trinity’s then-President Ron Calgaard was intent on elevating the school’s academic reputation, so he chose the alternate path, ultimately moving all sports into the NCAA’s Division III non-scholarship option.

I’ve been delighted to discover that in the decades since, Trinity has fine-tuned its academic standing, joined a co-ed athletic conference, built world-class sports fields and facilities, hired visionary athletic leaders (such as Bob King and Julie Jenkins, among others) and become the gold standard for Division III. 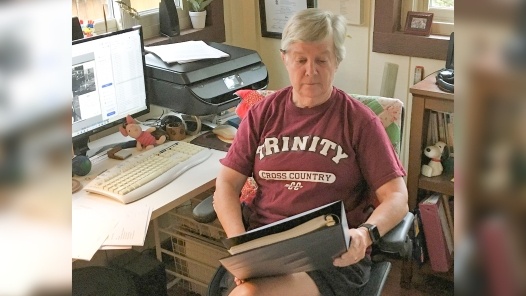 Betsy Pasley '77 works from her home on research for the book, The Legacy of Women’s Sports at Trinity University: From the Sidelines to the Headlines.

A perfect post-COVID day for me now is to drive down to the spectacular south campus complex and watch a women’s varsity game. I see these scholar-athletes growing through teamwork, and I stand in awe of the female and male coaches who are preparing them for life after Trinity.

So what have I learned? We absolutely needed Title IX to open doors for women to pursue athletic activities and professional degrees. Trinity made the right decision to adopt the NCAA’s non-commercial Division III. And my transformative time at Trinity learning journalism, playing softball, running on the first women’s track team, making lifelong friends, and meeting my future spouse changed my life.

Betsy Gerhardt Pasley '77 played varsity sports and wrote for daily newspapers before completing a 32-year career in corporate communications and marketing. Between travel and volunteer work, Betsy found time to inspire The Playing Field website as well as help research and write the book The Legacy of Women’s Sports at Trinity University: From the Sidelines to the Headlines, which will be published in 2023 by Trinity University Press.