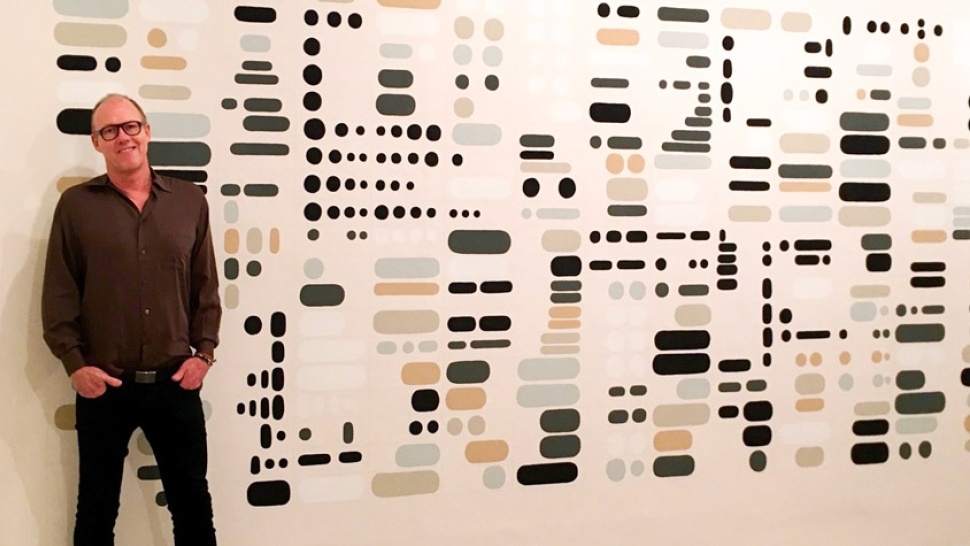 When Matt Magee says he's using plastic, he's not talking credit cards. He's talking art, in particular objects or wall hangings created from found or discarded detritus, a passion that dates from his early youth making origami or collecting rocks and shells with his geologist dad. "My hands are never idle," he says.

Working retail in a Dallas mall as a young teenager, Matt collected plastic clothing bags and brought them home to twist, melt, wad, and weave into sculptures and wall pieces. That passion continued through college, where the art history major was constantly drawing and creating. He describes his Trinity dorm room as "a complete environmental installation of hanging forms, like an underwater kelp forest with stenciled pictograms on the floor."

Constantly seeking opportunities for creative expression, Matt spent three undergraduate summers in internships with the Guggenheim Museum— two in their New York location and one at the Peggy Guggenheim Collection in Venice. When not working in the museums, he took photographs and made objects. In Venice he collected detergent bottles from the canals and, using wire and spray paint, turned them into sculptures.

During his early 20s, Matt realized that what made him happiest was making things. "There wasn't a conscious ‘I'm an artist' epiphany," he explains, "but more like, ‘This is just who I am.'" Post graduation, he headed to New York, where he applied and was accepted for graduate work at the Pratt Institute. Instinctively drawn to creative people, he recalls a summer residency at the Atlantic Center for the Arts in Florida, where Texas artist James Surls became a mentor and adviser, as a high point during his Pratt years.

With a "posse" of artist friends, Matt moved to Brooklyn to find a studio. Although his body of work was growing and attracting attention, to pay the bills he found work as a preparator for a gallery in SoHo, further expanding his circle of artist and gallery-owner friends. From his one-room apartment, he biked daily over the Brooklyn Bridge to Lower Manhattan for work. Evenings, weekends, and days off were spent working in his Bed-Stuy studio, a space he kept from 1986-2004. "I was constantly moving, biking to work, biking to the studio, biking to openings, in all weather at all times of the day and night," he recalls.

Soon enough, artist Robert Rauschenberg hired Matt as an art handler. As his responsibilities increased, Matt began traveling as a courier with shipments to exhibitions across Europe. On one memorable trip, he transported Jasper John's Flashlight sculpture circa 1955 from Rauschenberg's collection to a Pop Art exhibition at the Pompidou Center in Paris. "After flying from JFK with the $1 million object by my side, I was met with armed guards at De Gaulle Airport and transported by armored vehicle to the museum, where I put on my white gloves and placed the object in the vitrine."

Matt worked with Rauschenberg for 18 years and at the time of Rauschenberg's death, Matt and his fellow colleagues were each given some of his and his tortoise Rocky's ashes in two copper vials. "I cherish them to this day," says Matt. Throughout those busy Big Apple years, Matt kept up his own studio work and had his first solo show in 2000, which received a positive review in Art in America.

Four years after Rauschenberg's death, Matt moved to Phoenix and found studio space at Cattle Track Arts compound, a nonprofit organization that has since received two Rauschenberg Foundation grants. The lower cost of living in Phoenix allowed Matt to be in the studio full time, "usually seven days a week." His work is shown in galleries across the U.S and in London. His current show with Glen Hanson at inde/Jacobs in Marfa, Texas, runs through May 29. Several of Matt's pieces are made from—you guessed it—plastic bags.

Recently, Matt completed seven of the largest paintings he has ever done in different sites around the U.S. and U.K. "To realize I'm now capable of these large scale, site-specific projects has opened up a new and interesting arena," he says, and now he would like to do more projects with museums and alternative venues. He has also been commissioned to make a 12-foot bronze version of a 17-inch wood and graphite sculpture he made in Brooklyn in 1990 titled Crinoid Sceptre noting, "It has become symbolic of the trajectory forward."