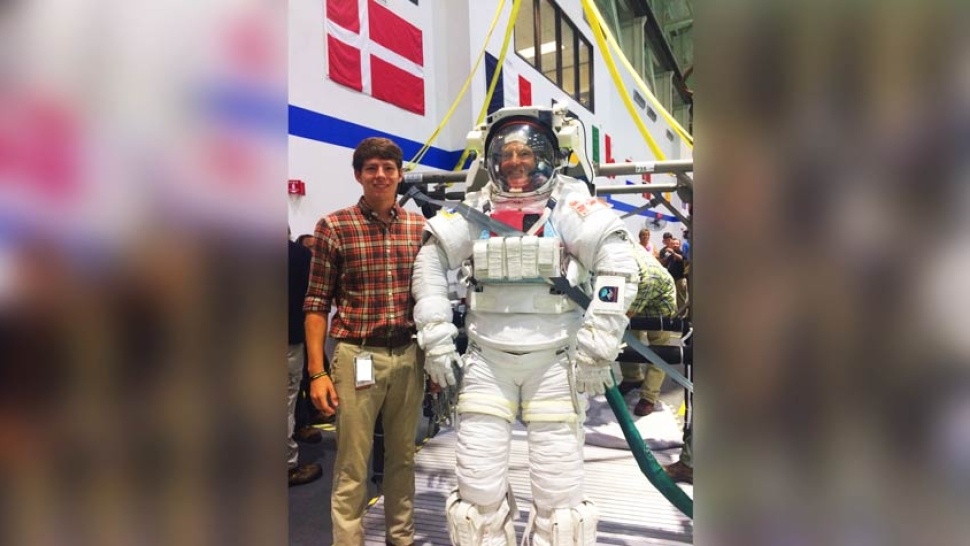 Daniel Henkes ’19 has been launching rockets since he was a teenager. Now, as NASA’s most outstanding intern, he’s looking to launch a career.

Henkes is an engineering science major from San Antonio, Texas, and when he graduates next fall, he won’t just be capping off his academic journey at Trinity, or a varsity cross country career: he’ll be completing a full stint in NASA’s prestigious Pathways Intern Employment Program (IEP), where he was just awarded most outstanding intern this summer.

“I’ve been going back-and-forth, spending pretty much every other semester working at the Johnson Space Center in Houston, then coming back to San Antonio,” Henkes says. “This might be labeled as entry-level work, but you’re doing things that don’t feel like entry-level.”

Getting a career at NASA is a notoriously competitive process, but being in the IEP is the best way for ambitious college students to get their foot in the door, Henkes says.

As part of the IEP, Henkes has worked for both of Houston’s major NASA directorates: flight operations and engineering. “Flight ops,” Henkes explains, involves the command room team of controllers you typically see in films like Apollo 13 or Armageddon, while engineering involves structural, electrical, and mechanical work on flightcraft. Henkes started his work on engine propulsion in engineering, before shifting into flight operations, where NASA currently has the most need. Here, Henkes managed a “mock-up” facility, designed to replicate the International Space Station, and learned to direct extravehicular activity, which encompasses anything involving astronauts operating outside of a flightcraft or space station.

“At NASA, we do more than just put people into space,” Henkes laughs. “Flight ops, I was doing that for just a few weeks before I fell in love with it.” 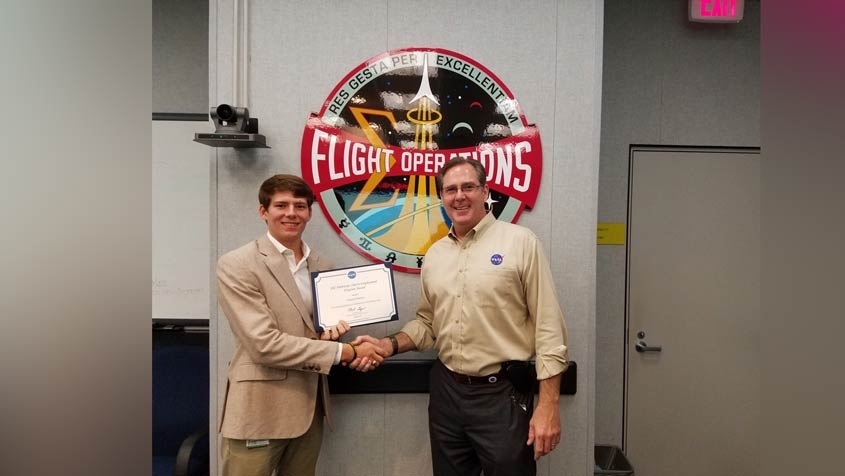 According to a statement from Henkes’ supervisors, his NASA coworkers have been continually impressed with his drive, noting that “all of (his tasks) were completed with a level of professionalism and skill of an experienced task team member, not a first tour intern.”

Henkes has been on this career trajectory seemingly his whole life. Originally a teenage rocketry whiz at Alamo Heights High School, he was part of an elite school club that built and launched rockets on the White Sands Missile Range in New Mexico.

But while college can sidetrack such passions for many young rocketry devotees, Henkes came to Trinity because the university offered him a way to pursue both an engineering degree and a fast-track NASA career.

“At Trinity, I’ve had a lot of help coordinating everything, especially with my academic advisors,” Henkes says. “Being a part of the IEP is something you typically only see with co-op programs at bigger universities, like Texas A&M or UT Austin, where they’ll work with you to incorporate your internship into your curriculum.”

Henkes has even been able to juggle his NASA internship and his studies with a successful running career at Trinity. He’s not just a mainstay on the Southern Collegiate Athletic Conference (SCAC) academic honor roll, but he’s also a three-time all-conference performer in cross country and the steeplechase.

And speaking of jumping over hurdles: Henkes’ biggest challenge has been finding enough time for all of these passions, especially with graduation requirements looming.

The IEP has required Henkes to split his years, working for entire semesters in Houston, then returning to campus for a semester of coursework. For many students, this would double the time it takes to earn their college degrees. But thanks to Trinity’s flexible approach to engineering science, it’s only taken Henkes one additional semester.

Jack Leifer, an engineering science professor, serves as Henkes’ academic advisor. Leifer says Henkes’ decision to pursue a NASA career wasn’t easy—Henkes had to double up design courses, work remotely on assignments, and even video conference in on his group projects while in Houston. 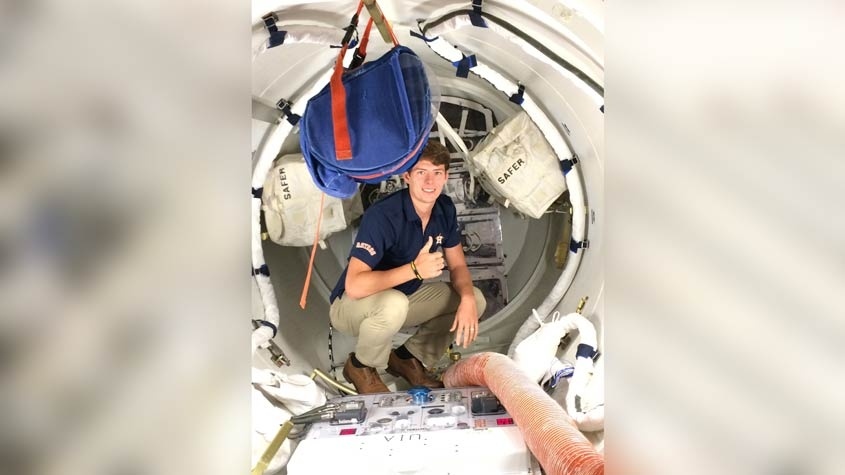 “I’ve known Daniel since before he was a first-year, because I remembered him from his very first tour of our facility as a high school student,” Leifer says. “And that mattered when we were trying to figure out how Daniel would be able to pull this off, to work remotely on assignments. I was able to go to my fellow engineering science faculty and say, ‘I know Daniel. I know his commitment to both his studies and his co-op work at NASA. And I believe, if there’s any student who can navigate this, it’s going to be Daniel.’”

With faculty allies in your corner, Leifer says, Trinity students can have the best of both worlds: big school resources and connections, paired with small-school faculty relationships.

“Because we know our students, our faculty is able to make accommodations, and to be flexible, Leifer says. “We can each act as an advocate for our students to the rest of our department.”

And Henkes says his semesters at Trinity never put a drag on the skyrocketing trajectory of his internship career. If anything, Trinity’s unique approach to engineering science actually gave Henkes a boost each time he returned into NASA’s orbit.At Trinity, unlike many other engineering programs, students are challenged with a design element all four years of study—not just as seniors—and also incorporate elements of electrical, chemical, and mechanical engineering into the curriculum, instead of just specializing in one field.

For Henkes, this meant he was ready to adapt to the versatile, constantly-changing parameters of his assigned projects at NASA. 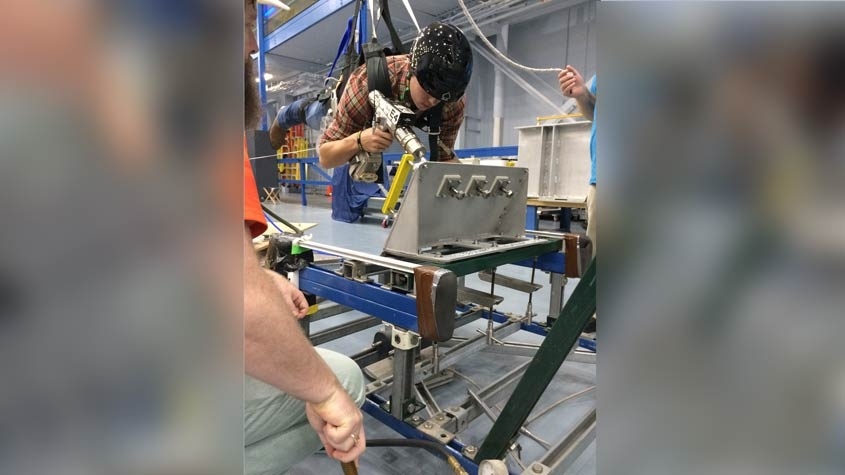 “When I went back to work, having that knowledge of chemical engineering, while also doing mechanical engineering, has been very helpful,” Henkes says. “Having to work on eight design projects at Trinity, that’s team-oriented work, and that’s beneficial. And NASA’s flight operations? It doesn’t get more team-oriented than that. So you have to have very good communications skills to succeed there, and that’s something that Trinity gave me the chance to work on: being part of a design group every semester.”

Whether he ends up in a control room, or with his hands on a massive ion thruster, Henkes is thrilled to see which part of the NASA team he’s invited to join next.

“All the divisions you’ve worked for over the course of your internship will be able to send you offers by the time you graduate, depending on where the openings are,” he says. “All this work for the internship, timewise, has been a big commitment.”