This lecture, sponsored by the Trinity University Student Diversity and Inclusion Office, will be held in-person in Laurie Auditorium on Thursday, Jan. 19, at 7 p.m., and is free and open to the public. The event will also be livestreamed on Tiger Network. 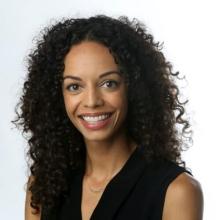 Dickerson, who engages audiences on the power of journalism as a check against systemic inequality, tells stories of remarkable resilience and hope from the front lines of the world’s refugee crisis.

Her work has taken her from Ukraine to Romania and Guatemala, where she’s spent years covering refugees and migrants forced to live on the move. While working for some of the United States’ foremost news outlets (such as NPR, The New York Times, and The Atlantic), Dickerson has won Peabody and Edward R. Murrow awards for her investigative reporting.

Dickerson is also an accomplished lecturer: On stage, she dispels common myths about people who have been forcibly displaced and breaks down the seemingly complex forces that influence their life trajectories—from policy to rhetoric and public sentiment.

Dickerson’s work conveys the human stories behind the growing global refugee crisis. Listeners can expect to walk away from this lecture with a deeper understanding of how war and other forms of insecurity that expel people from their homes exacerbate pre-existing inequality.

Prospective attendees can stay tuned to the latest information on this lecture at trinity.edu/events, while media can contact Courtney Balderas, director for Student Diversity and Inclusion, at cbaldera@trinity.edu.

This lecture is sponsored in collaboration with the San Antonio MLK Jr. Commission and is part of a larger week of Trinity events for honoring and celebrating the civil rights leader. The University also invites students and members of the Trinity community to join in San Antonio’s MLK March on Monday, Jan. 16. This is a chance to march for equity for all and to speak truth to power.

The week’s festivities will also include the Student Diversity and Inclusion Office’s inaugural TU National Day of Racial Healing programming on Tuesday, Jan. 17, from 11 a.m. to 2 p.m. in the Fiesta Room. Come learn more about the office’s recent designation as an AAC&U Truth Racial Healing and Transformation Center and what the National Racial Day of Healing means for the Trinity community.