Longtime Trinity staffer Mary Lopez passed away peacefully, surrounded by family, on May 22, 2019, after a yearlong struggle with health issues. She was 77. 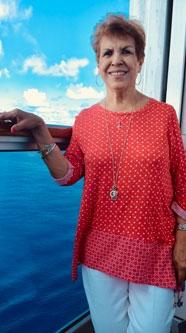 Widely remembered for her gentle manner and ready smile, Mary joined the Trinity staff in April 1989 and served in the President’s Office as administrative secretary under former Trinity President Ron Calgaard. Calgaard recalls, “When I began at Trinity, Mary was a young member of the staff in the President’s Office. She was a perfect fit. She was friendly, efficient, and very likable. When she moved to become the leader of the support staff in the Development Office in 1995, we were sorry to see her go, but happy for her.”

In the Development Office, Mary was promoted to administrative assistant and served there until her retirement in 2014. Former Vice President for University Relations and Development Marc Raney, who worked closely with Mary for almost 20 years, remembers her as “an admired colleague who became a family friend,” and says, “She will be remembered for many good things, but I will always remember her for her gracious style, ‘grace under pressure’ demeanor, and supportive friendship. She still represents the very best of Trinity. We will all miss her dearly.”

Special events coordinator Susan Lavenant also worked closely with Mary. “I feel so fortunate to have known and worked with her,” Lavenant says. “She actually helped me find my first position at Trinity. She was a wonderful mentor and friend who made all of us better at our jobs.”

Devoted to Trinity and always willing to help, Mary returned briefly in 2016 and 2017 to temporary positions in the Department of Education and later in the Office of Alumni Relations to serve during a period of staff vacancies.

Following in her mother’s footsteps, Mary’s daughter Sandra Murray joined the Trinity staff part-time almost nine years ago and is now coordinator of certification and assessment in the education department. “My mom knew that being there for my kids was my priority, so she thought that Trinity would be the ideal place to work and still be the mom I wanted to be. She was absolutely right. Her grandkids have grown up coming to Trinity for a variety of events, and she loved that.”

In addition to her daughter, Mary is survived by two sons, five beloved grandchildren, and had been joyfully anticipating the arrival of her first great-grandchild this summer.