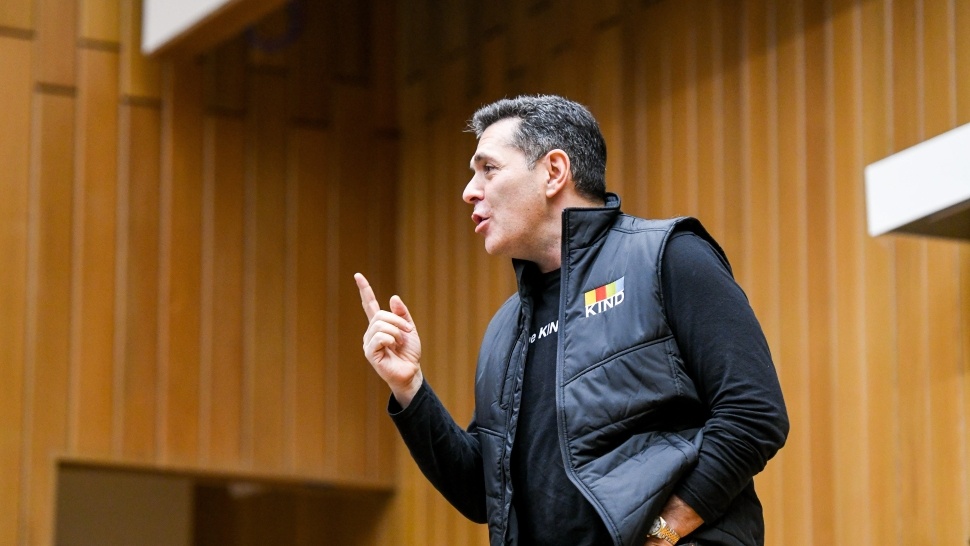 Businessman, pacifist, innovator. All true, but incomplete parts of the whole story.

Write off Lubetzky, founder and CEO of $3-billion giant KIND Snacks, as just another billionaire wading into political speech, and you’ll miss his lifetime of dedicated social activism. Dismiss him as an idealistic college student who wrote his senior thesis on solving the Arab-Israeli conflict, and you’ll forget his Jewish-Mexican family has endured both the Holocaust and multiple migrations across the globe.

And don’t get him started on labels like “public” and “private” sectors.

“My brain doesn’t function in silos of, ‘Can I do this as a business, or can I do this in a nonprofit world?’” Lubetzky says. “I think about the problem that I’m trying to solve, and then my brain starts tinkering with, ‘How can we do this in a creative way?”

At Trinity, Lubetzky learned to do more than use market forces: He learned to use them for good. And so if you’re going to call him anything, call him a social entrepreneur. 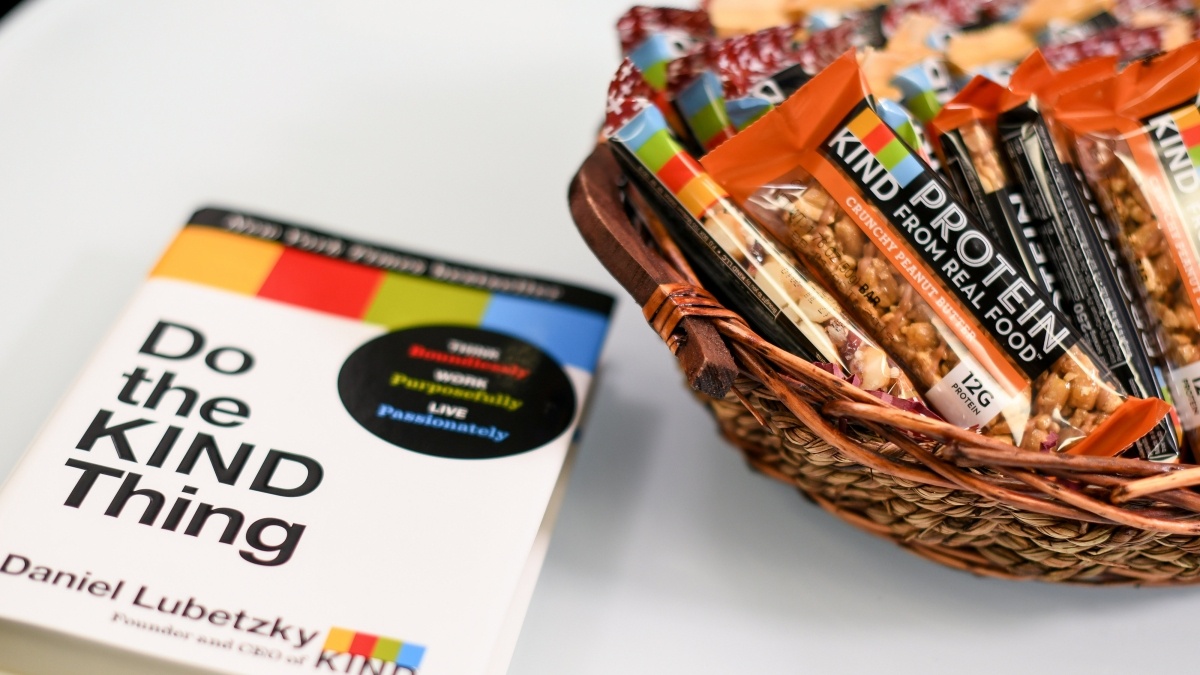 Snacks with a soul

As CEO of KIND, Lubetzky heads a $3-billion empire that punches in a crowded weight class with fellow snack bar giants Clif, Quaker, and Nature Valley, among others. So, why is Lubetzky’s name the one that keeps popping up in Forbes, NPR, and outlets worldwide?

“The first thing about KIND is that all of the products we make are made with nutritionally-rich ingredients. So every day, millions of people’s lives are healthier because they’re eating products that are displacing empty calories, that are nutritious, and that are healthful, that are recommended for daily consumption,” Lubetzky says.

But while plenty of these snack bar companies bill themselves as healthy, Lubetzky notes his company also makes altruism a part of the brand.

“The other stuff that we do, that is trying to inspire kindness, through the culture we create, through the marketing programs we do, by inspiring and celebrating kind acts in our community,” Lubetzky explains. “Whether it’s our #kindawesome cards—cards that we give out when we spot an act of kindness, to celebrate and encourage more kind acts, or the KIND People program—where we identify people who are really going above and beyond—we fund and scale up their projects that are fostering amity and kindness.” 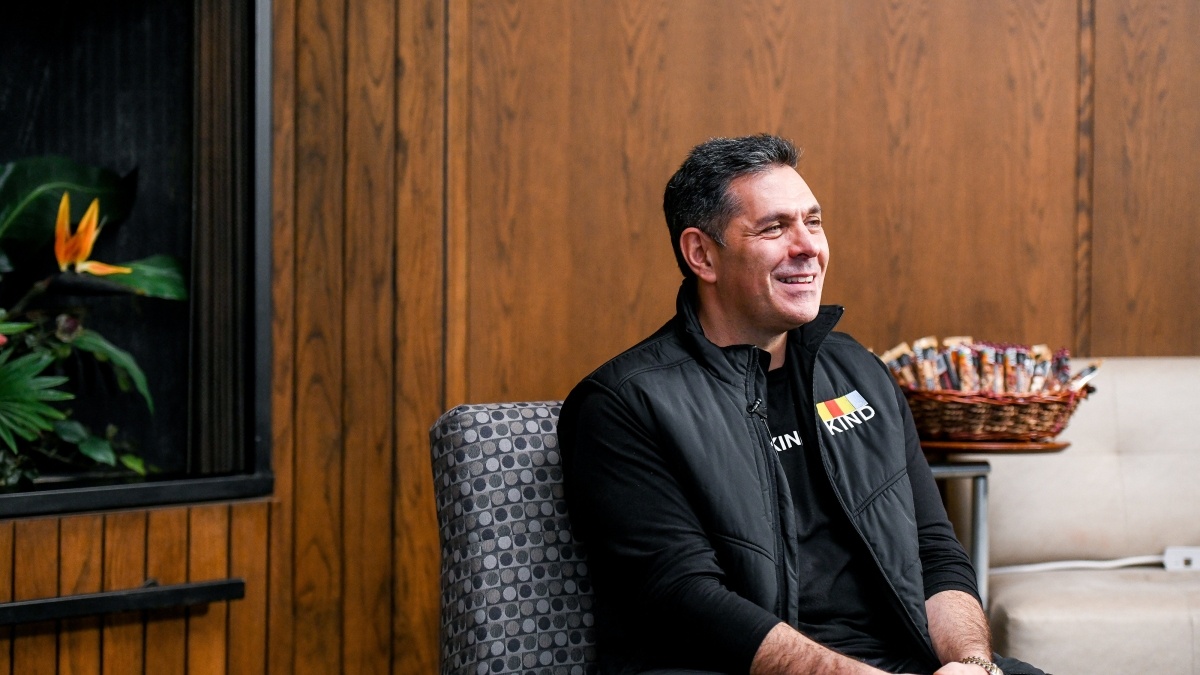 A lifetime of kindness

This philosophy isn’t a gimmick. Nor is KIND the only way Lubetzky makes a global impact: He’s lived his entire life figuring out ways to change the world for the better.

Born in Mexico City in 1968 as the Jewish-Mexican son of a Holocaust survivor, Lubetzky immigrated to San Antonio at age 16 and enrolled in Trinity University a few years later.

“[My dad] was a Holocaust survivor, and a man who, in spite all of the horrible stuff that he went through as a kid, he remembered not just those horrors, but also the kindness that helped him survive through those days, and how he was liberated from a concentration camp. He lived the rest of his life trying to make people’s lives kind,” Lubetzky says.

At Trinity, Lubetzky wanted to find a way to realize his father’s dream of a kinder world. He started with an unlikely pairing of academic interests: economics and international relations. Lubetzky combined the study of economics and business with a passion he had towards resolving the Arab-Israeli conflict. Fueled by provocative questions and personal attention from his professors, as well as a liberal arts curriculum that pushed him to think outside of conventional political structures, Lubetzky started to think, “How can business have a positive role in bringing neighbors in a conflict region to work together, and to prevent conflict and make money rather than war?’”

He would ultimately develop a thesis on the “influence of economics in resolving the Arab-Israeli conflict.”

“And the theory that I conceived while I was here at Trinity is that, as people interact with one another in the business world, under the right conditions, it can shatter cultural stereotypes,” Lubetzky says, “and it can help people humanize one another.” 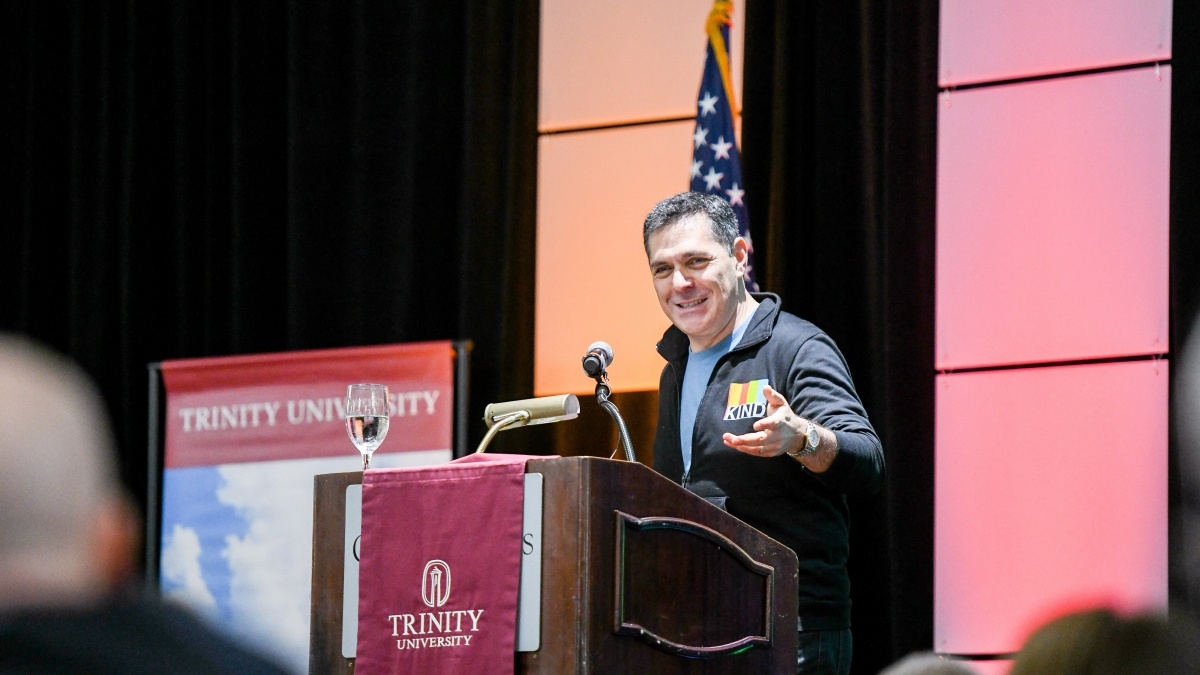 Like many Trinity graduates, Lubetzky says he was eager to test his theory in the real world. He ultimately founded PeaceWorks, a company that aimed to unite Egyptians, Palestinians, and Turks, and Israelis through cooperative business ventures in the food space. The business became a success and remains in operation to this day. Lubetzky notes that PeaceWorks may not have solved the conflict, but its survival means his idea still came true, in a way.

He has also gone on to launch other civic-minded organizations and businesses, such as the OneVoice movement in 2002—aiming to amplify the voices of moderate Israelis and Palestinians—and Empatico, a free video conferencing platform designed to connect classrooms around the world. Through the platform, students aged 7-11 can work on social skills such as respectful communication, perspective taking, cooperation, and critical thinking alongside peers from different countries and backgrounds.

And with hands in so many positive initiatives, this is precisely why Lubetzky doesn’t like labels like “nonprofit” or “corporate activism.”

“Sometimes, your creativity becomes a business with a social purpose. Or, sometimes, there is no market mechanism or product or service to sell, and it becomes a nonprofit,” Lubetzky says. “But in the days of social entrepreneurship, sometimes it’s kind of like a hybrid in the middle.” 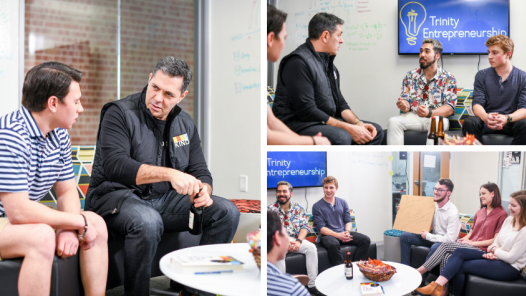 Lubetzky met with members of top Trinity startups PATCH and Quick Sip Coffee, among others

To Lubetzky, this versatility is a defining feature of where the 21st-century economy is headed.

“Today, our world is permeated and influenced by the private sector more than anything else,” Lubetzky says. “Using business to advance social good, if you can figure out a way to use market forces and tackle a social challenge, is really valuable.”

And Trinity, he says, is the perfect spot for entrepreneurs to find their place in this world.

“One of the things that I benefited from the most while I was at Trinity was combining two seemingly different topics and then finding ways to create value by deploying business forces for social good,” Lubetzky notes. “And I think any time you do interdisciplinary studies, any time you combine things that people are not expecting to combine, students are going to have the opportunity to connect the dots and create things that haven’t existed before.”

Visiting campus for a speaking series this February, Lubetzky noticed the buzz around Trinity’s entrepreneurship program. Under the direction of professor Luis Martinez ’91, the program has launched a nationwide expansion of its Students+Startups initiative, is gearing up for the fifth annual Stumberg Venture Competition, and has evolved into an incubator for students of all passions, disciplines, and backgrounds to find creative solutions to the world’s problems.

“I was so gratified to learn that there’s now an Entrepreneurship Hall where students get to coexist, exchange thoughts, create community, and come up with ideas; there were a couple students from different grades that had joined forces to create things that were very promising for society,” Lubetzky says of his visit. “So it’s not just entrepreneurship, but social entrepreneurship. Frankly, I enjoyed learning from them more than sharing any words of wisdom. For me it was more learning from them, and seeing how high-energy and how real this program seems to be at Trinity.”