Not All Who Wander Are Lost
International and study-abroad seniors recognized for global participation
Abigail DeNike ’20
Wednesday, April 3, 2019 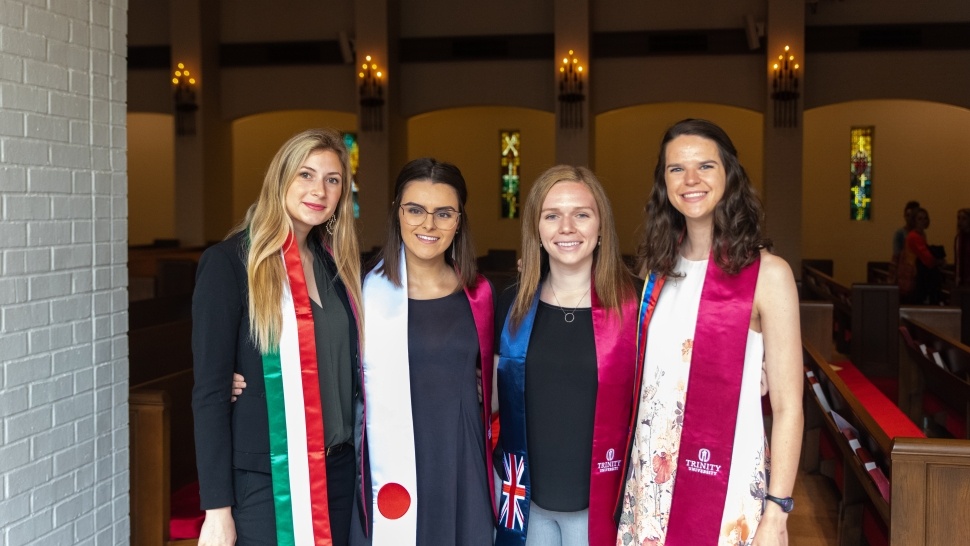 Can travel mean more than “visiting places, taking a couple of pictures, eating good food, getting a tan and then leaving?,” Julia Shults ’19 asked. According to the Class of 2019, travel is an opportunity for unique cultural and academic learning.

On Saturday, March 23, we got a glimpse of what travel means to 57 graduating seniors, gathered together in Parker Chapel for the first annual Trinity Recognition for International Engagement ceremony. The ceremony honored both international students graduating from Trinity, as well as students who studied abroad during their time at the University. The chapel was buzzing as antsy seniors reminisced on the memories and life lessons they had collected from studying in a foreign country.

Sabrina Cortez, a study abroad advisor for the Center for International Engagement (CIE), began the ceremony by congratulating the students present for their commitment to “internationalizing our campus.” The students recognized at the ceremony had taken opportunities to participate in a global community, increasing their ability to effectively communicate with people from diverse backgrounds. These students are helping the University reach a goal part of the Trinity Tomorrow Strategic Plan: to foster students with the knowledge and skills to be effective citizens of the world, able to communicate, understand, and do business with non-Americans. 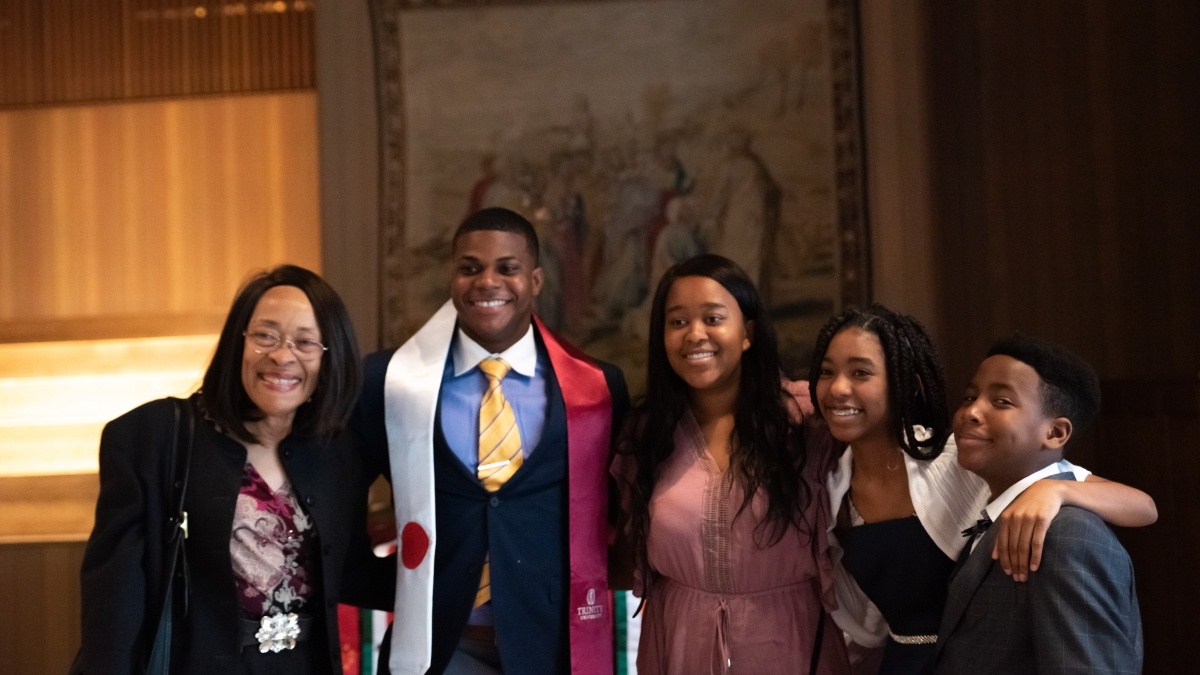 Two students spoke about the lasting impact their experiences abroad have had on them. Kenneth Lucas Kusima ’19, an international student from Tanzania, shared the three most important lessons he, and his fellow international students, will take away from their time in America:

“ 1. We had a realization that we are capable of whatever we set our minds to, 2. we learned how to be citizens of the world and saw that there are strengths that exist in our differences, and lastly 3., many of us formed a new sense of appreciation and patriotism for where we come from,” Kusima said.

Kusima concluded his speech by thanking the CIE “for making sure we don’t get detained at airports as a result of having wrong documentation,” which solicited a laugh, and the professors, for fostering a welcoming community for academic learning. 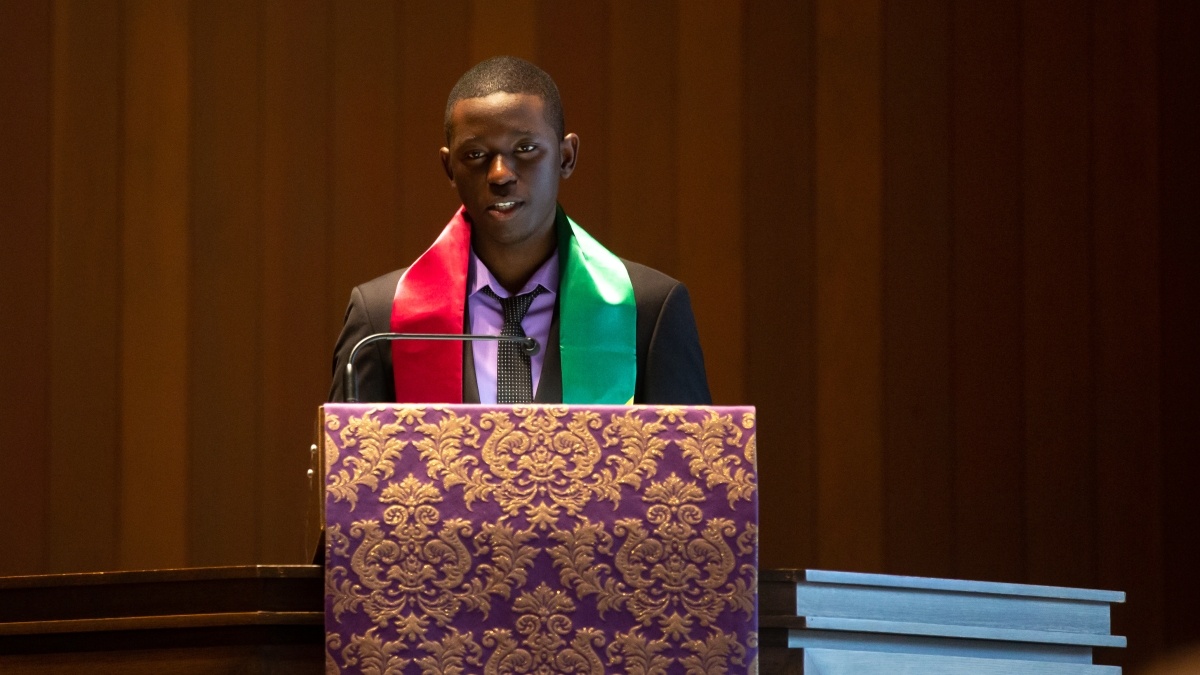 Sashes were presented by Sheryl Tynes, vice president for Student Life, to 15 international students representing 11 different countries and 42 students who had traveled abroad to 18 different countries and six continents during their studies. The sashes showcase the flag of the student’s country of origin or study and are intended for the seniors to wear on graduation day.

Julia Shults ’19 spoke about the multiple abroad learning experiences she participated in, taking her to Mexico, Spain, Bosnia, and the Netherlands. She highlighted that going abroad is often associated with certain stereotypes of carefree frolic, but it is actually an academically enriching experience.

Her study abroad programs encouraged her to go beyond visiting and interact with “people on an intimate level,” she explained. “I learned about their lives, their hopes, their assumptions about the world. I continuously encountered the paradox of having so many differences and yet being the same.”

Her time abroad affected her career path as well and her appreciation for communicating with people from different backgrounds. “These connections and true depth of experience are what separates study abroad from a simple vacation and what has inspired me to pursue a career in international diplomacy,” Shults said. “In a world that is increasingly divided, isolationist, and nationalistic, study abroad can provide a bridge to not only tolerance but collaboration.” 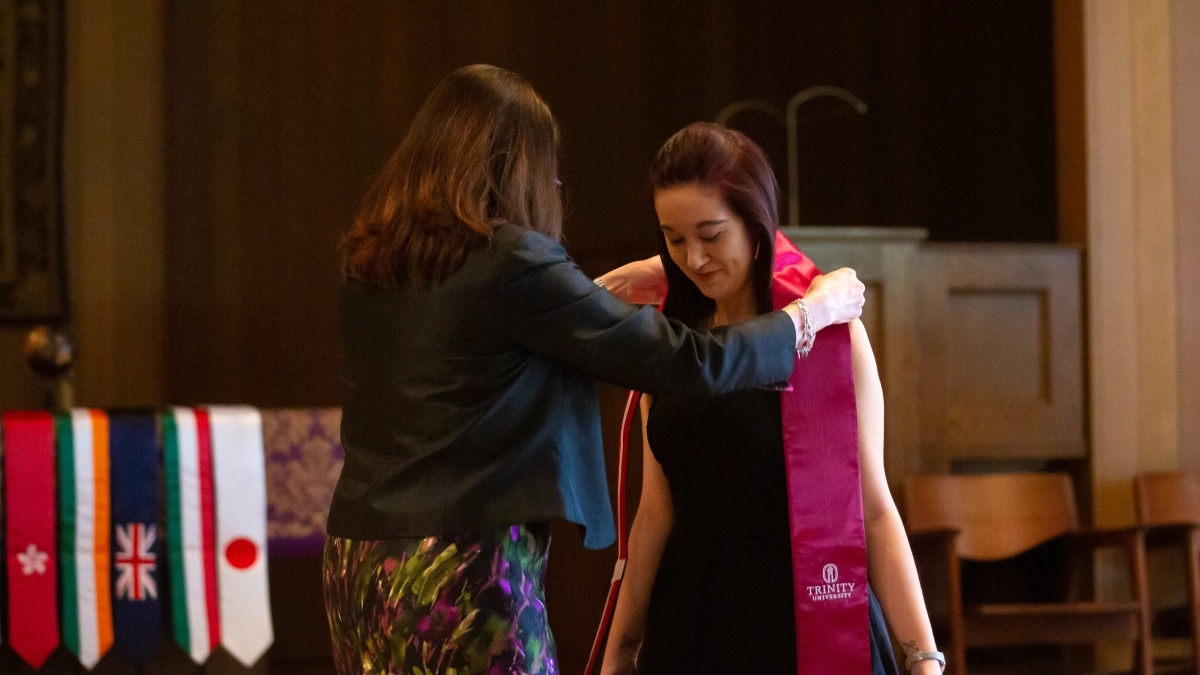 The closing remarks, given by Katsuo Nishikawa, director for the Center for International Engagement, left the seniors with a poignant reminder of the importance of their time abroad. He recounted his personal story: how he felt isolated during his time living in Japan and decided to ride his bike outside his normal boundaries. He stopped at a food stall when the woman running the stall offered him a free meal. He was shown respect and compassion for the first time during his stay in Japan. One person was all it took for him to open up to the experience of living abroad and let go of any stigma.

He urged the seniors to “keep these sashes as a reminder of that time you peddled too far, saw your reflection and noticed something you had not noticed there before. My hope is that they remind you of what you have accomplished and that they inspire you to go beyond what you think you are capable of.”