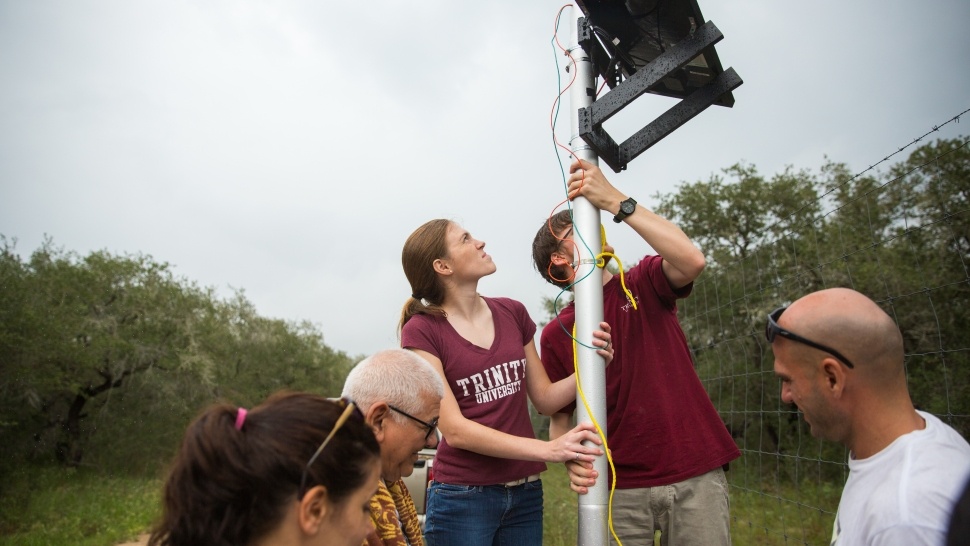 In spring 2016, education professor Angela Breidenstein ’91, ’92 made a simple request to a group of Trinity engineering science majors.

Brooks County, Texas, is home to a deadly stretch of borderland that has claimed the lives of more than 600 migrants over the past decade due to dehydration, heat, and harsh conditions. Breidenstein had learned of a small nonprofit in the area, the South Texas Human Rights Center (STHRC), that was trying to keep these people alive by creating water stations. Now, she wanted a team of Trinity engineers to find a way to make these stations better.

The response: 13 students took on the cause for their senior engineering science project, one of the largest groups in Trinity engineering history.

“People were attracted to the humanitarian focus,” Breidenstein says. “This is about compassion. We’re all going somewhere, we’re all coming from somewhere. And there are moments when you need help—maybe it’s a fundamental human need, like water.”

Water might be a fundamental need, but finding it in a place like Brooks County is anything but a given. The area seems benign at first—straddled by massive, sprawling ranches where low-hanging trees sway over a thick, green-brown underbrush, and fluttering orange butterflies float through the air.

To a migrant, perhaps one fleeing civil strife, violence, or destitution, reaching America means walking hundreds of miles through areas like this. But as thirst sets in, this seemingly rustic paradise turns into hell on earth. The Texas sun beats down relentlessly, the peaceful wind kicks up choking dust, and the thick, labyrinth-like South Texas brush creates more of an obstacle than most man-made barriers could ever do. That same brush also harbors venomous snakes while hundreds of vultures circle ominously overhead.

Against these odds, the Trinity team started making their stand in fall 2016. Partnering with STHRC director Eddie Canales—hailed by Breidenstein as a “one-man show” who had designed, built, and installed about a hundred water stations across 1,200 miles of ranchland before partnering with Trinity—the group began looking for ways to improve on Canales’ original design. 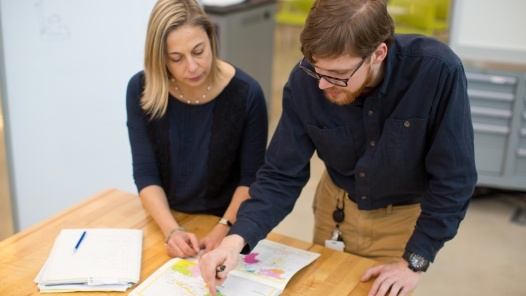 Breidenstein and Regan collaborate on ideas for the South Texas water project.

Canales’ early water stations consisted of 55-gallon barrels, each containing several jugs of water inside, all strapped to makeshift flagpoles to attract the attention of passersby. Signage on the station encouraged people in need to take bottled water right out of the barrel to survive long enough to make it to a nearby town.

“Our initial effort was meant to keep people from dying,” Canales says. “But we had a very rudimentary set of water stations. No electronics, no solar power, no wireless (capability).”

This meant, Breidenstein says, there was no way for Canales to know when the stations had run out of water—or worse.

“Some of the stations had been vandalized,” Breidenstein says. “Others had disappeared.”

So, engineering team members James Regan ’17, Kathryn Schoer ’17, and the rest of the Tigers got to work. By spring 2017, they had designed a prototype station with a sturdy, high-density polyethylene base to hold the large water barrel. On a waterproofed side compartment, a compact set of wires connects a battery to more wires running up through a hollow, 20-foot pole connected to the base; on the pole, a 30-watt solar panel, LED lighting, and a flag.

In short, this system is meant to hold water, attract attention both night and day, and let aid workers know when the station needs to be refilled, has been tipped over, or is damaged—all for about $2,000 worth of materials.

“It’s not a perfect design,” says Regan, who also created an online tool that can help aid providers interface with the station remotely. “But it’s going to help people who are in an unfortunate situation.”

By October 2017, the prototype was ready for real-world use. Regan, Schoer, and Canales, along with representatives from other humanitarian organizations, headed down to the Copa North Ranch in Falfurrias, Texas, for the Trinity project’s first installation in the field.

The day of the trip was overcast, as swirling winds and rain clouds grumbled overhead. The group stocked up two truck beds of full gallon jugs of water to refill some existing water stations, packed into the trucks led by Canales, and set out to find a suitable location on the ranch for the new prototype.

Canales has worked tirelessly to negotiate with local ranch owners for access to their properties, often pitching them the idea that it’s better to live with migrants passing through the land and leaving alive than continually finding dead bodies in every backyard. As the group pulled through the gate at Copa North, this collaboration was on full display. Ranch hands waved Canales, Schoer, and Regan along a dusty path—Copa North is vast enough to warrant its own street signs—without hesitation. Some smiled at the group, others turned away wearily. The Trinity team also passed a group of green-uniformed border patrol officers on a training exercise, the officers even pausing to offer Canales help with directions.

As the group passed existing water stations, the importance of the Trinity team’s upgrades became clear. While some installations had been stolen or vandalized, others had been battered by the elements. At one station, a flagpole tilted to the south, its tattered white flag listless, almost as if hung in surrender. “You can see, these things have to be tough,” Canales says.

For Regan, these are the type of high stakes he came to Trinity to encounter.

“With Trinity students, whether they’re studying a STEM subject or one of the humanities, there’s something they know a lot about,” Regan says. “On projects like this … you can say, ‘I’m helping, and I’m helping with the things I learned at Trinity.’ This was one of the first issues I’ve ever seen where I realized, I could actually help with this; I know enough to do that.”

Farther down the path, the group traveled on a road running alongside a thin-wire, 12-foot-high deer fence. The group marveled at the sheer number of twisted wires where migrants had presumably scaled the obstacle; for more than a half-mile of fence, there wasn’t a single segment where the wire hadn’t been bent.

At last, the group spotted a suitable location for the prototype—a small clearing along the barrier near a large gap in the nearby brush. Determining the area to be heavily traveled, the group started assembling the station.

Until this point, the project had been hypothetical. Schoer and Regan had prepared the prototype as well as possible, meticulously designing, ordering material, and prepping for the installation. But as any engineer will tell you, moving plans from paper to the field can open up a world of problems.

“I really could have used more wire,” Schoer says, weaving electronics into place. As Regan  fiddled with a battery, he used a knife and tape to gently connect other exposed metal filaments.

To complicate matters, the group soon heard a rumbling on the horizon. The same rain clouds that brought a relieving shade earlier now posed a threat to the exposed electronics. Schoer and Regan raced against the oncoming precipitation—in an almost Hollywood-level, cut-the-blue-wire scenario—before finally connecting, arranging, and sealing the device. Future models, Schoer hopes, will have a pre-packaged, modular set of electronics that will make for an easier installation in the field.

“That’s the great thing about engineering—there’s no final solution to a problem,” Schoer says. “My hope is that if future generations can start improving this project, they can make it more compact or more energy efficient. They can take what we have learned and improve upon it.”

Schoer and Regan credit their poise under pressure to Trinity’s experiential take on learning. “Trinity’s engineering science program is very unique compared to programs at other universities,” Schoer says. “We have a design sequence where every semester we are in groups doing design work, lab reports, and presentations. We have to be able to take our ideas and express them on a technical level.”

But expressing these ideas on a simplified level is important, too, since Schoer and Regan can’t install every water station in the future. They’ll need to pass that responsibility on to volunteers, perhaps ones with less technical knowledge.

“Even if you have the ideas in your head, you still have to be able to clearly explain those,” said Schoer, effortlessly describing how each bit of electronics worked while racing against the clock. “Trinity prepares you for that during all four years.”

As the group threaded the wiring through the flagpole and pushed the entire apparatus into the air, the station cut a striking sight. As the team raised the flag, the banner unfurled slowly, nicked by a steady stream of rain droplets but pushed ever outward by a growing breeze. And as the wind picked up and the flag billowed, Canales, Regan, and Schoer let out a collective cheer.

“Many STEM disciplines, you think, ‘Okay, I have to go through five years of research, then a prototype testing, then another five years of revisions, and the society can’t even use your work until 15 years down the road,” Schoer says. “But this project was really the complete opposite. With humanitarian work, you can take your work, be ingenious with it, and create a project that can be used right away.” 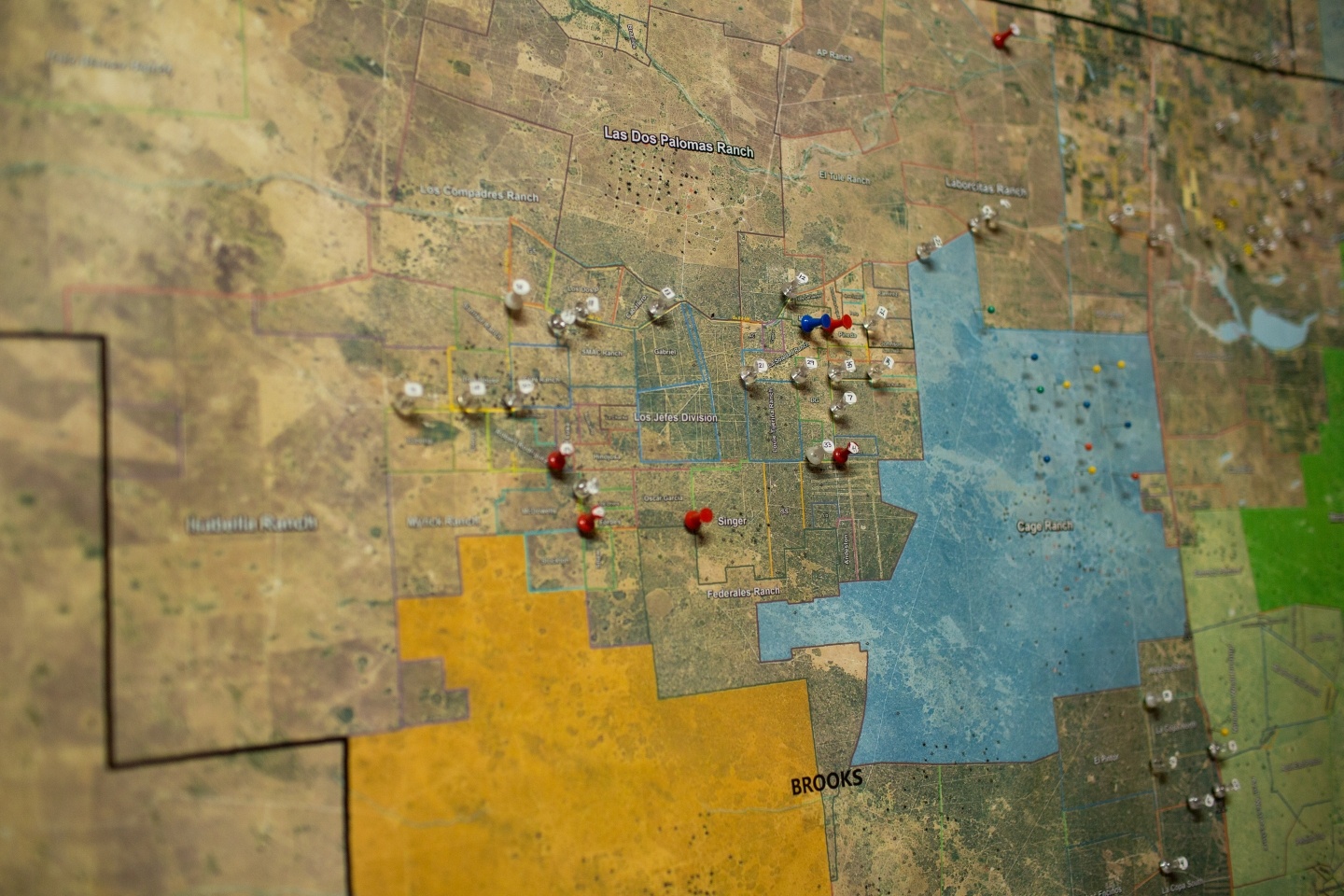 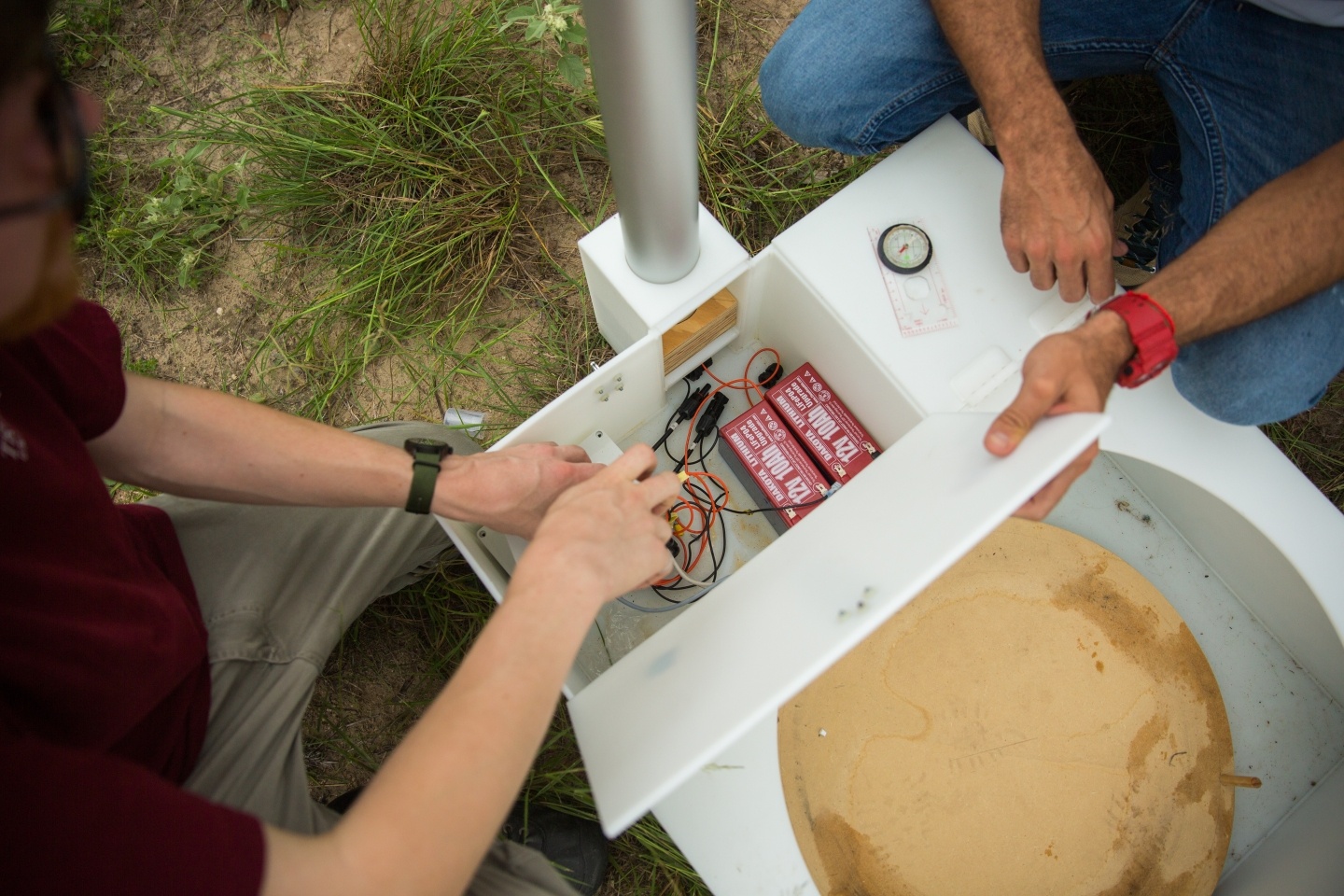 While Schoer and Regan have moved on from the barrel initiative, Trinity’s Department of Engineering Science puts out an annual call for senior engineering project suggestions to the entire University community. Additionally, a new generation of Trinity engineering science students will take on the barrel project at the end of the 2018 academic year. Beyond making additional upgrades to the water stations, Breidenstein wants future students to take a larger lesson away from the partnership with the STHRC.

“One of my hopes for this project is that Trinity students meet someone like Eddie Canales and think, ‘I can do something in the world,’” Breidenstein says. “It’s one thing to say, ‘If you want to see change in the world, go do it.’ But you need to see people who are actually doing that, so on a practical level I think seeing agency and passion come together to tackle a humanitarian problem is inspiring.”

Upgrades to the barrel project could become even more far-reaching than the crisis at the U.S. border, Breidenstein says, as the International Red Cross has expressed interest in creating pilot programs using the Trinity design. The organization has approved plans for 10 of these smart water systems to be deployed along the U.S.-Mexico border in 2018. This evolving prototype, Breidenstein says, could have applications in natural parks, during weather disasters, or anywhere else lost people need water. The barrels may one day even be repurposed to hold medicine, food, or other supplies.

“That’s why I think this project appeals to people—because the sum of the South Texas Human Rights Center and Eddie Canales and our engineering department, our engineering students who put that together, is greater than those parts,” Breidenstein says. “This just shows that working together for real causes can bring people together in really enriching ways.”