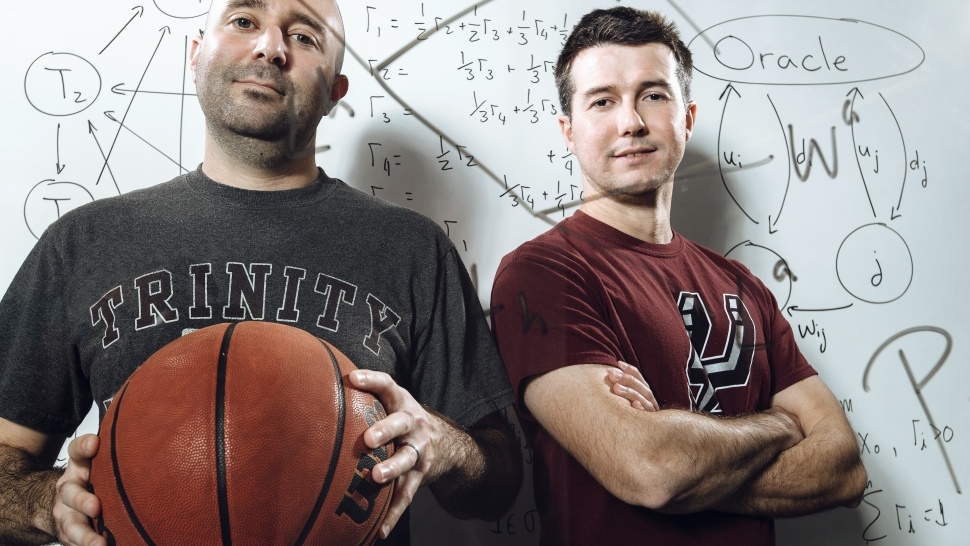 In the fall of 2011, Balreira, with the help of former Trinity professor Thomas Tegtmeyer, applied a Markovian-based ranking method in which a pairwise comparison is used to mathematically quantify dominance. This particular method is commonly used in the sports world to determine a ranking of teams and the probability of one team winning over the other. But Balreira noticed a flaw in this system: an imbalanced emphasis on upsets.

“When a bad team beats a very good team, there is a tendency to rank the bad team much higher,” said Balreira. “And if an undefeated team loses to a consistently losing team, the Markovian method would overemphasize the defeat.”

In order to create a more accurate ranking, Balreira developed an extra step to provide a new ranking method: the Oracle Method. “The Oracle is an attempt to find a customization within the Markovian ranking method,” Balreira said. “In addition to win and loss outcomes, it also considers the scores in each game.”

Because of the convenience of data collection with sports, Balreira decided to conduct a foresight prediction with his ranking method based on the National Football League’s (NFL) 1966-2013 seasons with the help of Miceli, a sports fanatic.

“I naturally keep up with the sports we are interested in: professional football, college football, and the NBA,” Miceli said.

“Miceli’s understanding of sports helped fill in the gaps and made sure everything we needed to consider with the NFL was accounted for,” Balreira added. 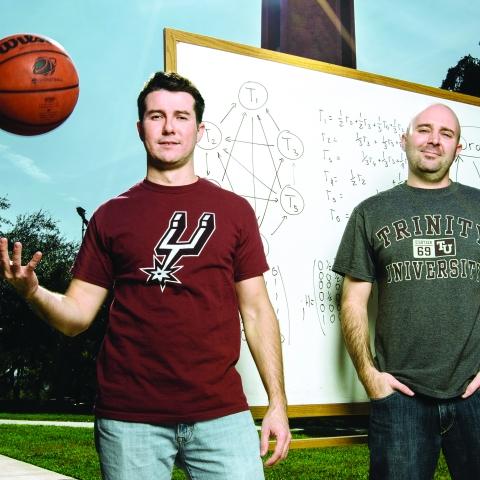 Using the Oracle Method, the two mathematicians correctly predicted 64.1 percent of the game outcomes. This method, based on correct prediction percentage, proved more accurate than other highly regarded ranking methods, such as ESPN Power Rankings, Massey, Colley, and PageRank.

Because of their increasingly successful results, Balreira has utilized the Oracle to predict outcomes from other sport organizations such as National Collegiate Athletic Association Football (NCAAF) and the National Texas Youth Football and Cheer Association (TYFA).

In order to predict the results of the 2014 NBA Finals, Balreira and Miceli adjusted the Oracle by considering home-court advantage. “Home advantage did not prove significant in the NFL,” Balreira said, “but for the NBA, one sees a much bigger difference.”

“In football, the ranking gets better as the season goes along,” Miceli added. “If the NFL season were two times as long, like the NBA season, [home advantage] would have a larger impact.”

Since Balreira and Miceli had to consider home-court advantage in order to determine a more accurate probability, the two professors simulated each team as two entities, “a home version and an away version,” Balreira said. “Instead of 30 teams, it’s 60. We then gave each version of the team a rating that can be used to compute the probability of winning a game.”

To determine who was going to win the Finals, Balreira and Miceli formulated the separate entities of a Spurs home team, Spurs away team, Heat home team, and Heat away team. They then formulated ratings based on wins and scores, as was done for the NFL.

“Winning the championship felt great!” Balreira said. “It provided another validation that we were working on a good idea.”

The success of the Oracle not only established that the method worked, but also served as a lesson for the community to apply math to the world of sports entertainment. “The mathematical model does just as good or better than human experts when it comes to picking games,” Miceli said. “Our model predicts right around 68 percent.”

Their predictions gained a lot of recognition in a city so proud of their San Antonio Spurs, earning coverage from news outlets such as the San Antonio Express-News, NBC’s News 4 WOAI, and ABC’s KSAT 12.

“This is definitely not your average type of sports story,” Chris Henao, assistant news director at KSAT, said. “As students, we have all sat in those math classes thinking, ‘When are we ever going to use that?’ but here’s an actual story of how math can be useful and interesting.”

The Oracle isn’t just predicting outcomes on sports fields. As part of Trinity’s Integrated Research in Biomathematics (IRBM) program, biology professor Michele Johnson, along with Jordan Bush ’14 and Mackenzie Quinn ’15, collaborated with Balreira in the research field to develop a model regarding how lizards establish dominance.

“At the end of the summer, we came up with a side project to see if we could use network theory to be able to understand the social relationships among lizards,” Johnson said.

This research entailed a lizard tournament, where two green Anole lizards perched on a stick to display dominance. “We put a stick in the middle of the cage and watched to see how the lizards decided who would sit on the perch,” Johnson said.

Johnson clarified that there were no physical altercations between any lizards, and if the “fight” seemed to turn into a physical interaction, the experiment was immediately stopped and assigned as a tie. “We determined rank depending on ‘wins’—which lizard jumped on the perch—and how long it took for one animal to win over the other,” Johnson said. “We used the Oracle Method to compare these results with the lizards’ body traits and behaviors.”

“From the Oracle rankings,” Balreira said, “we saw that head width was the most important together with behavior.”

Moving forward, Balreira would like to teach Trinity students how to utilize the Oracle Method for use with any ranking system they might find interesting.

“I want them to evaluate the quality of the predictions,” Balreira said. “It started as a project, but I want students to take it on further, to understand the mathematics.”

For students that wish to learn more about the Oracle Method, Balreira is offering two data-focused courses this spring: Introduction to Modern Mathematics and an upper division linear algebra course.

“I think one of the most valuable aspects of this ranking project that Dr. Balreira and I work on is that it shows how low-level theoretical mathematics can be useful in real-world applications,” Miceli said. “We hope that if this project gets some publicity in town, that it will get kids–elementary, junior high, high school–interested in learning mathematics.”

For more information on the Oracle Method and sports statistics, check out Balreira’s website, rank.balreira.com, where NFL, NBA and NCAA rankings are updated weekly.