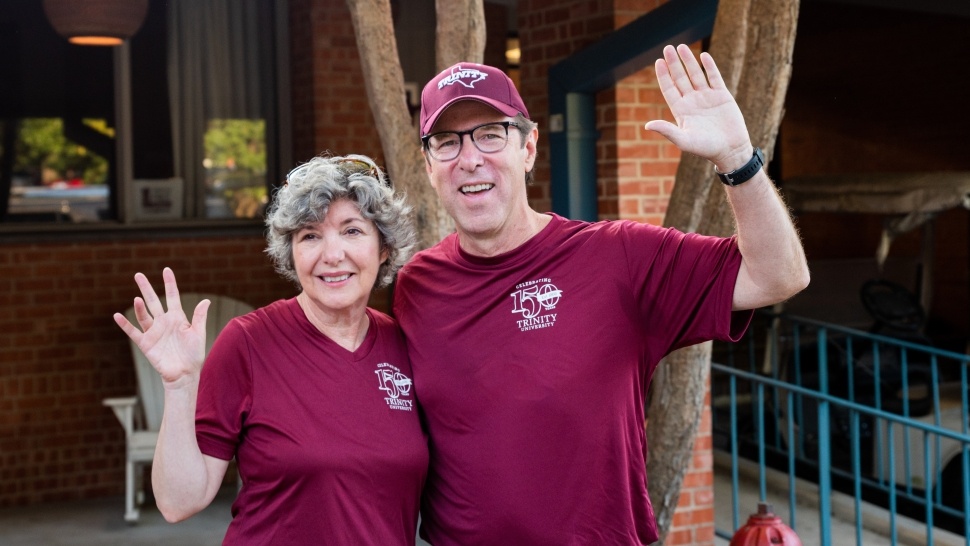 Trinity President Danny Anderson has announced that he will retire at the end of the school year in May 2022, after having served with distinction for seven years. Anderson has made his mark as a great leader by putting Trinity on a trajectory to become a nationally recognized school and by embodying a warm, friendly, calming presence on campus. Students fondly refer to him as "Danderson," his Trinity email user name.

Anderson took the helm as Trinity's 19th president with a vision that the University become recognized as the model of 21st-century liberal arts and sciences education. He didn't foresee a global pandemic that would change the University's way of doing things.

For Anderson, this never meant wavering on a world-class education for Trinity's students, but rather as a moment to seek new insights on how to continue moving forward with enduring excellence, intentional inclusion, and perpetual discovery. He also used this time for self-reflection, which led him to decide that it was time for him to change his trajectory and enter into the next phase of his life: retirement.

"It has been an honor to serve as the president of Trinity University since June 2015. In that time, we have worked together to chart a new trajectory for Trinity University, one that will increase our national standing through a focus on student success and belonging," Anderson says. "While I am enthusiastic about Trinity’s bright future, the pandemic has given me the opportunity to re-examine my personal priorities."

Anderson has been a hands-on leader. During his tenure he was instrumental in Trinity’s Campus Master Plan, which was part of the Trinity Tomorrow strategic plan to help guide decisions for renovations, enhancements, space usage, and new construction in the coming decades. To date, the University has broken ground on the new Dicke Hall, reopened the historic Halsell Center, and just announced its school of business naming to the Neidorff School of Business after receiving the University’s single largest donation of $25 million from Trinity alumnus and Trustee Michael Neidroff ’65. The school recently ranked No. 1 in the West for “America’s Best Colleges” by U.S. News & World Report for the 29th time in 30 years.

Trinity celebrated its milestone 150th Anniversary in 2019, and with a commitment to institutional growth, Anderson created a Diversity and Inclusion Task Force with the charge to provide actionable recommendations to generate fundamental, sustained change in the areas of diversity, equity, and inclusion.

"I have the utmost respect and appreciation for President Anderson, his many accomplishments, and future vision for Trinity, so I have a deep sense of loss of his steady leadership,” says Board of Trustees Chair Melody Boone Meyer ’79. “At the same time, I fully respect his decision to retire. Given the tremendous support the Trustees and the entire Trinity community have for his extraordinary leadership, he and I will work together to ensure a highly successful succession."

Meyer continues, "Under president Anderson’s leadership, Trinity has been laser-focused on student outcomes that make a real difference—from improving graduation and retention rates to creating a sense of belonging and purpose. His advocacy for faculty and staff has been unwavering, and critical to achieving our goals as an institution of higher learning."

The Board of Trustees is currently establishing the search committee, which will be composed of Board members as well as faculty, staff, student, and alumni representatives.

"As an alumna, I am deeply appreciative of his efforts to move my beloved alma mater forward; and as a colleague, I respect his wise and patient counsel," Meyer says. "I admire President Anderson’s steady hand, open mind, and servant’s heart at the helm of our great institution."