Raul Gonzales died on Aug. 12, 2020, at the age of 68. He retired from Trinity in 2014 after 42 years of service as a maintenance specialist at the University. Gonzalez started his career at Trinity on the grounds crew, then moved into maintenance, specializing in plumbing until his retirement. 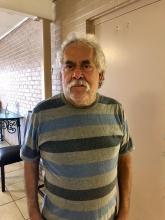 “He was a hard worker, always willing to help with plumbing problems, easy to get along with,” says his former colleague Jonny Brown, who also spoke about Raul coming by and playing dominoes with the guys during their lunch break. “He enjoyed talking about sports, especially football and the Cowboys. We will miss him.”

His longtime colleague of 30 years Martin Chapa echoed Brown’s sentiments. “Raul was a sports fanatic–he knew all the football games and baseball games happening and all of their scores. He was a great guy.”