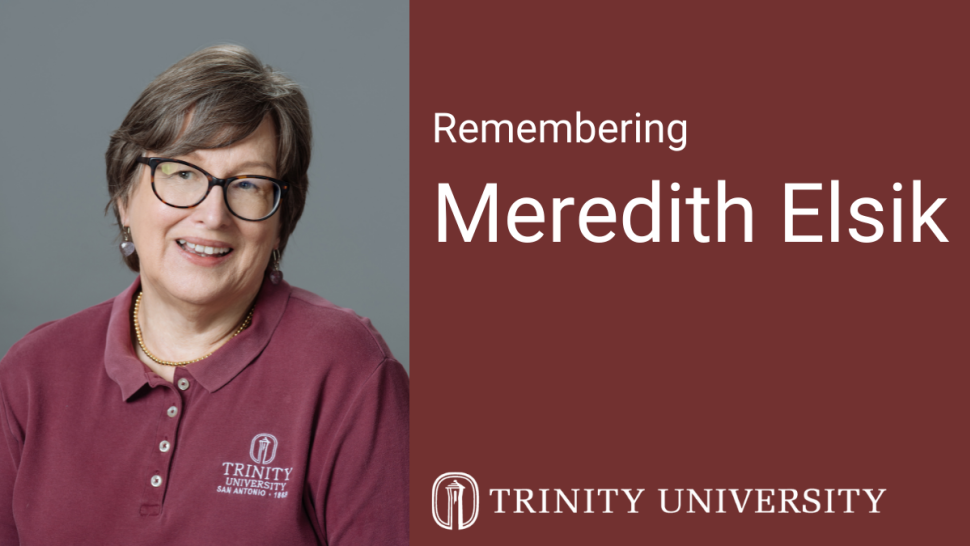 Meredith Elsik died on June 4, 2021, after a long illness. She worked in the Coates Library for nearly 35 years until her retirement in December 2020. Elsik worked in various areas of the library throughout her time at the University, including reference, circulation, interlibrary loan, and special collections/archives. She retired as a senior reference assistant, helping at the circulation desk and in the Rare Books room in Special Collections.

“My favorite aspect [of the job] is having the opportunity to work with students and help students,” Elsik said in a 2018 Trinitonian article.

In the article, she said that she especially enjoys looking at old photos that depict what life was like at Trinity decades and even centuries ago.

“There are photos of other sports teams as well as of students on campus that give more of an idea of what life on the campus was like back in Waxahachie or during early years on this campus,” Elsik said.

Elsik said she also enjoyed learning random pieces of Trinity trivia through her job. For example, she cited learning about commencement being cancelled in 1946 due to a polio outbreak. “It’s amazing the different things you find out—these little facts that nobody knows,” Elsik said.

“As someone whose Trinity career has overlapped hers in almost its entirety, I can say that her competence, unflappable and cheerful demeanor, thoroughness of assistance, and willingness to do whatever needed to be done have only been exceeded by her caring and thoughtfulness toward coworkers and library users alike,” says Chris Nolan, University librarian. “She has been an exemplar of the high quality of service for which Trinity is known, and she will be missed by many.”

Elsik’s memorial service will be held in the sanctuary of First Presbyterian Church in San Antonio on Tuesday, June 15, at 1 p.m. A reception will follow.