Having served Trinity for 19 years, Rosendo Salazar Torres III died on May 14, 2019, at the age of 57. He started at Trinity as a groundskeeper in April 2001 and was quickly promoted that same year to maintenance assistant. 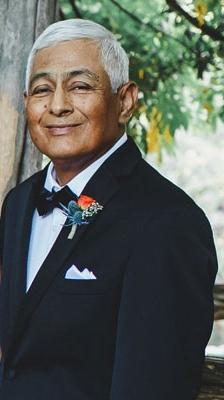 Jim Baker, director for Facilities Services, describes Torres as the “model employee” who showed up on time and was meticulous about maintaining his equipment “so that first thing in the morning he was the first guy out of the gate, ready to go.”

Baker also describes Torres as low-maintenance, a reserved and quiet man who showed deep pride for his family. Recently he shared with his coworkers photos from his daughter’s wedding in New York.

That pride extended into his work, his daughter Genevieve says. “He was very proud of and loved, loved working for Trinity,” she recalls. “He would take us around campus and tell us all about the buildings,” recently showing off the banners his team had put up around campus celebrating Trinity’s 150th anniversary.

Torres was part of the team that maintains Trinity’s landscaping, where people could frequently find him on the lawn mower. Baker says that Torres was quite friendly, even on the mower—you just had to look for his “signal,” a nod and two-finger wave that allowed him to keep the rest of his fingers on the wheel.

In addition to the friendliness, other traits used to describe Torres were hardworking, humble, and kind hearted.

“He had a servant’s heart—he was always willing to help others, no matter if he had a very busy day,” Genevieve says. “If someone called him for help, he would drop everything to help anyone with something as simple as moving a piece of furniture or cutting their yard.”

Before working at Trinity, Torres spent 19 years with the North East Independent School District. A man rich in faith, Torres was on the Dream Team at Cross Mountain Church. He played the accordion and drums and loved spending time outdoors, making people laugh, and talking about sports. He grew up playing baseball, his favorite sport, and was ecstatic when Trinity’s baseball team took home the Division III national championship in 2016.

He built deep friendships throughout his nearly two decades at Trinity, his daughter says. “He enjoyed going to work because he would look forward to the conversations he would have with his coworkers and the many people he would meet around campus. He was very happy. He knew that working at Trinity would open up doors for his family.”

Torres was preceded in death by his parents, Rosendo and Genoveva Torres. He is survived by his wife, Yolanda; daughters, Hannah Rose and Genevieve Elaine; son-in-law, Aaron Parraz; sister, Norma Hernandez; and extended family and countless friends.