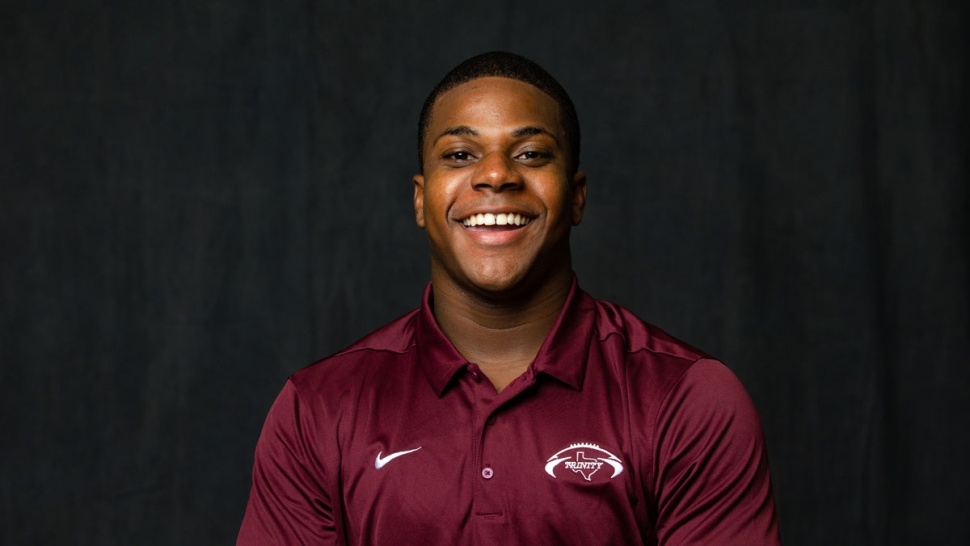 Trinity University senior Jordan Williams, a religion major and an elementary education minor from Houston, Texas, has been selected to receive a UPS Scholarship for the 2018-19 academic year.

At Trinity, Williams played safety on the football team and was also team captain. He has participated in Trinity’s study abroad program, where he spent six weeks working at a children’s hospital in Nishinomiya, Japan, feeding underserved children. Also while in Japan, Williams studied political science and production system management through a Six Sigma leadership program at Toyota.

In the community, Williams is actively involved in a special community program, the Boulé Scholars, which allows high-achieving African American male college students to network with prominent African American male leaders in San Antonio and participate in mentoring workshops that prepare the students for their career fields. He is also involved in Still Water Sports Camp, a Christian organization that gives kids from every background and socioeconomic status an opportunity to engage in many activities that create positive and fulfilling experiences. There, Williams mentors and councils kids on how to become better versions of themselves. He has also been a volunteer for the YMCA as part of the “Give Back” fundraiser and a volunteer at Mt. Zion First Baptist Church assisting with the San Antonio Food Bank.

Williams lost his mother to breast cancer when he was 11, and his father passed away in October 2017. He is the youngest of four siblings—two brothers and a sister, who he says have been his motivation to continue with his education and make an impact in the community by giving of himself so that others may succeed.

Williams is planning to attend Trinity’s graduate program for education upon graduation in May 2019 and is thankful for being awarded the UPS Scholarship.

The scholarship is provided by the Independent Colleges and Universities of Texas (ICUT) Foundation and its national partner, the Council of Independent Colleges (CIC). Through this program, the ICUT Foundation has awarded $170,250 in UPS Scholarships to 39 students at private institutions across Texas. The CIC is an association of more than 700 nonprofit independent colleges and universities and higher education affiliates and organizations that has worked since 1956 to support college and university leadership, advance institutional excellence, and enhance public understanding of private higher education’s contributions to society. CIC is the major national organization focused on providing services to leaders of independent colleges and universities as well as conferences, seminars, and other programs that help institutions improve educational quality, administrative and financial performance, and institutional visibility.