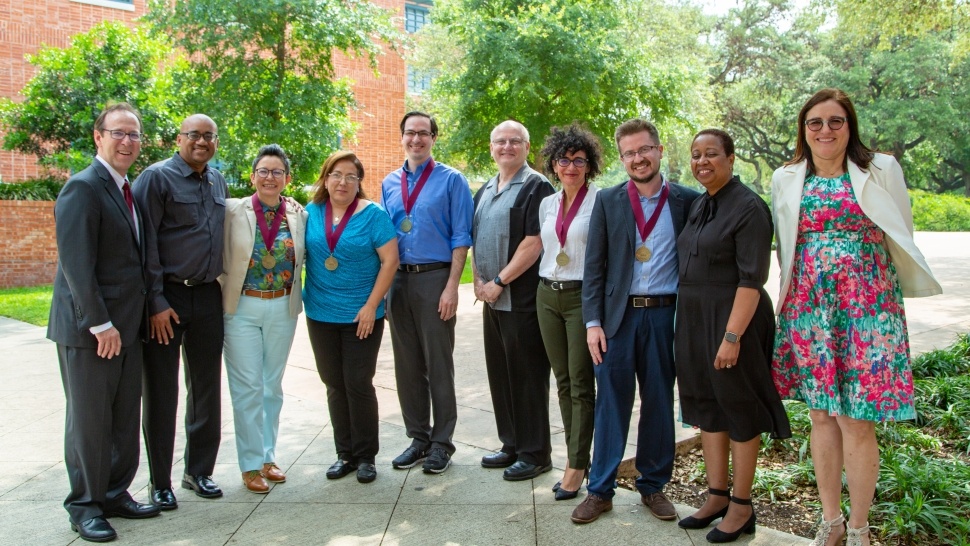 Now in its second year, the President’s Award for Excellence in Student Advocacy was presented to one staff member—James Bynum, operations manager in the communication department—and one faculty member—Wilson Terrell Jr., associate professor in engineering science. The award recognizes Trinity employees who have been significant partners in supporting student success, both inside and outside of the classroom.

Students describe Rosa Aloisi’s classes as “demanding, challenging, enlightening, amazing, and highly recommended.” Recipient of the 2017 Trinity faculty award for outstanding achievement in international education, Aloisi frequently accompanies students abroad to The Hague, Auschwitz, and Bosnia. Her research focuses on the impact of international tribunals on the reconciliation and reestablishment of peace in areas marked by extreme violations of human rights, especially in the Balkans. Aloisi has co-authored a book titled Judgment Day: Judicial Decision Making at the International Criminal Tribunals, which reviewers have praised as a “well-articulated and impressive piece of research that provides a theoretically grounded, systematic analysis of judicial decision making.” She has also published two refereed journal articles, two book chapters, and six conference papers, with two of them co-authored by Trinity students.

Routinely praised for his carefully organized classes and ability to engage students in compelling historical narratives, Jason Johnson has been described as a “great lecturer who has very high teaching standards.” Johnson is the distinguished scholar-in-residence at the San Antonio Holocaust Memorial Museum, and he is also a member of Everyday History 26, an international scholarly writing collective. He contributed to the group’s collaborative book project, Rupture of the Everyday: Views of Germany from the Ground. Two years ago, he published a book with Routledge Press titled Divided Village: The Cold War in the German Borderland, which was deemed a “book of the year” by Times Higher Education and recommended by the Choice Association of College and Research Libraries. In addition to presenting 14 research talks across the country, Johnson has co-organized a regional research symposium for Jewish studies.

In 2018 alone, Rita Urquijo-Ruiz mentored students in the Mellon, McNair, and Mexico, the Americas, and Spain (MAS) programs; directed the MAS program, organized the MAS Álvarez Seminar, chaired two successful faculty searches, and helped create Trinity’s first Latinx Leadership Institute and Class. Additionally, at Trinity Urquijo-Ruiz has served on the Lecturers and Visiting Scholars Committee, the Editorial Board for Trinity University Press, the Executive Committee of the MAS program, and the Commission on Promotion and Tenure. She has also co-directed the women’s and gender studies minor for two years and will direct the new global Latinx studies major beginning fall 2019. In the local community, Urquijo-Ruiz has volunteered with and sponsored events at the Esperanza Peace and Justice Center and the Guadalupe Cultural Arts Center, and she is an active performing artist in the area. At the national level, she has reviewed manuscripts for numerous journals and academic presses, such as the University of Chicago and the University of Arizona. Urquijo-Ruiz has also served for nine years on the executive committee of the leading Chicana/Latina studies organization Mujeres Activas en Letras y Cambio Social (MALCS) and is currently a member of the national advisory board of Chicana/Latina Studies: The Journal of MALCS.

One colleague said of Adam Urbach, “He is the model of what we strive for as teachers-scholars at Trinity.” Urbach has amassed an impressive scientific record and is identified as an international leader in the field of molecular recognition. His work at Trinity has so far yielded 23 peer-reviewed publications, which have been co-authored with 35 Trinity students and alumni and have received more than 1600 citations to date. He has presented 61 invited talks and seminars on this work, and he has been principal investigator on 15 grant awards totaling more than $2.8 million in external funding. Urbach has received both the National Science Foundation CAREER Award and the Henry-Dreyfus Teacher-Scholar Award. He was recently named a Cottrell Scholar by the Research Corporation for Science Advancement.

A recent alumna shared that Rocio Delgado’s “most powerful message has been that in order to accomplish your goals, you don’t have to change who you are. Rather, honor what makes you unique; be passionate in your goals.” Other advisees universally acknowledge Delgado’s patience, understanding, and expertise in navigating students’ emotional challenges alongside University requirements during advising. Indeed, Delgado is regarded by the Trinity community as an expert listener and tireless advocate for students. One advisee describes Delgado’s advising space as a “safe and uplifting environment,” and a recent graduate wrote, “Seeing such a powerful Latina do all these amazing things pushes me to also do amazing things.”

Wilson Terrell Jr. is known for being tough, but fair—he holds high expectations for his students, but he equips them with the tools to conquer challenging material. Terrell invests in his students’ success by not only connecting them with campus services, but also taking the extra step to understand the services thoroughly himself. He regularly visits the Tiger Learning Commons (TLC) to talk through the programs they offer and how his students can utilize them, and he requires his engineering science students to attend Academic Success workshops. He also shows deep interest in Student Accessibility Services and the Accommodated Testing Center (ATC), taking extra steps to introduce himself to the staff and learn about the policies and procedures they offer to help his students. For example, during finals one semester, he “camped out” at the TLC to be fully available to any of his students taking exams in the ATC—students who can often feel isolated and apologetic for their learning differences and accommodations. Terrell also advocates for his students through the National Science Foundation’s FASTER grant program, which financially supports students in need who are pursuing STEM majors. He was one of the main authors of the first funded McNair Scholars grant, and he is currently involved in the campus Makerspace initiative with Les Bleamaster.

Having served Trinity for more than three decades, James Bynum is well known to many students and alumni alike for his helpful nature and friendly, patient demeanor. He helps students run TigerTV and also oversees the communication lab, taking steps to encourage student growth. For example, recognizing that younger students may be too nervous to talk to upperclassmen, Bynum randomizes group projects so that everyone would have the chance to organically meet new people. “He knows how to cultivate an inclusive environment, which is an especially important trait for faculty to have, because students follow their lead. This helps make Trinity the community where students feel they belong,” one student said. And, having served Trinity for 35 years, Bynum has impacted thousands of students over the decades, some of whom fondly reminisce over his guidance. One student recalls, “I met a TigerTV executive producer from ten years ago; we spent the entire dinner talking about how much we both loved the communication department and James. I think the fact that an alum from ten years ago was able to speak as enthusiastically about a current staff member speaks volumes.” 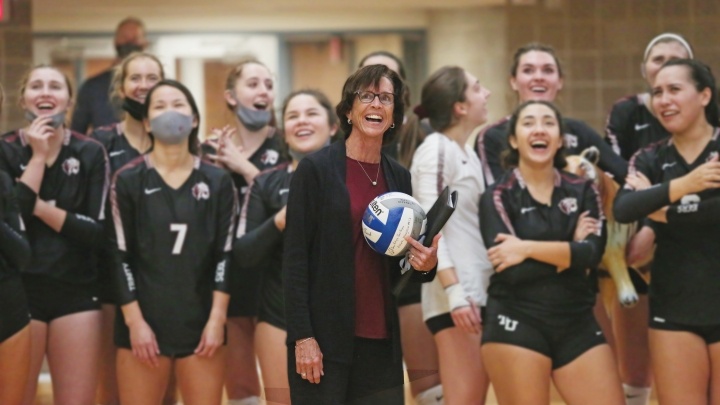 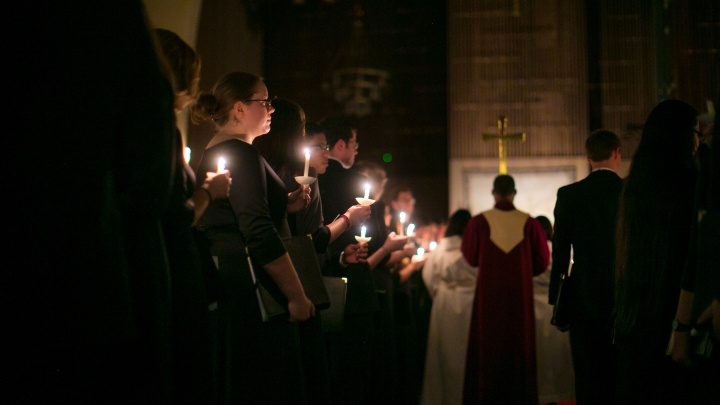 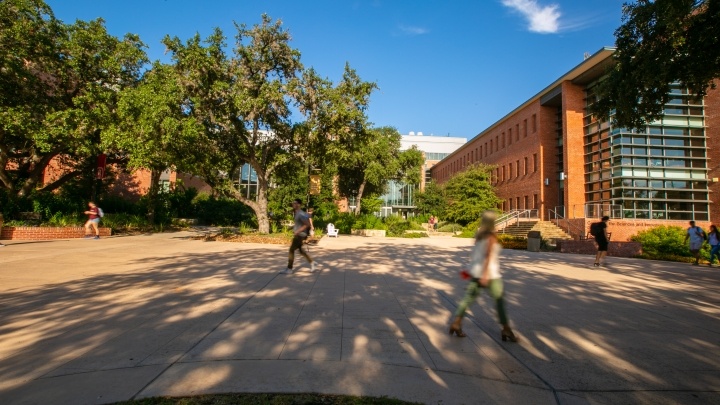