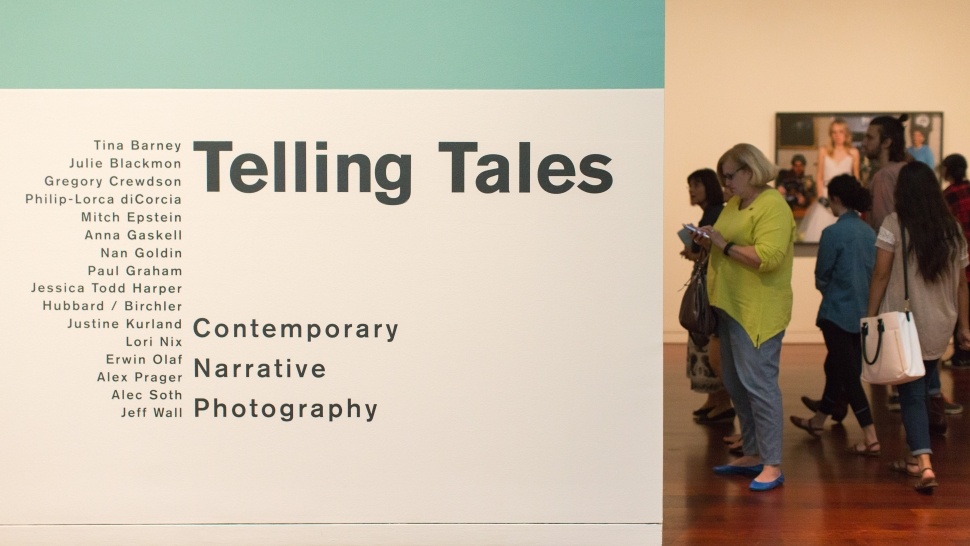 When the McNay Art Museum was curating an exhibit of photographs that tell a story, organizers asked Jenny Browne, associate professor of English at Trinity University and Poet Laureate for the city of San Antonio, to provide words for the images.

In turn, Browne invited students in one of her creative writing classes to bring to life the commission from the McNay by writing six-word stories about the works of 17 photographers whose works appear in Telling Tales: Contemporary Narrative Photography at the museum through Jan. 15, 2017.

Browne said the museum shared a catalog of the photographs before the exhibit opened. She urged the students to examine the photographed relationships between people and between objects. “I told them, ‘You can’t write about the whole thing, so pick out some aspect of the photo,’” Browne said, adding with emphasis, “Because you only have six words.”

The creative project also meshes with one of her goals as Poet Laureate – and that is to engage the public in literature, she said.

The engagement had a profound effect on one of the students, Briauna Barrera ’17, a San Antonio student double majoring in urban studies and environmental studies, with a minor in creative writing.

Narrative photography is used to tell a story, and in some of the McNay photographs, the events being depicted were staged with actors. Some express social commentary. And others beg for explanation.

On the surface, one photograph is a day in the life of an Asian restaurant. The accompanying six-word story by Derek Hudson ’19, is “Egg drop soup. Bombs drop too.”

Kate Carey, director of education at the McNay, said she wanted the six-word stories to function as a “jumping off point” for interpreting the photographic artwork. “If a story read as a caption, we didn’t choose it,” she said.

In addition to Barrera and Hudson, the other student writers are: Megan Allen ’19, Brianna Azua ’19, Julia Camp ’18, and Michael Garcia ’19.

In her description of the project that is posted at the beginning of the exhibit, Browne noted that the stories are a form of ekphrasis, a Greek word for “marking art about art.” She discussed the photographs in terms of their cause and effect, tone and time, and irony and surprise. When anyone got stuck, Browne drew from the metaphor of what important items would you grab to take with you if your house were on fire. She said, “If you can only take one line with you, what will it be?”