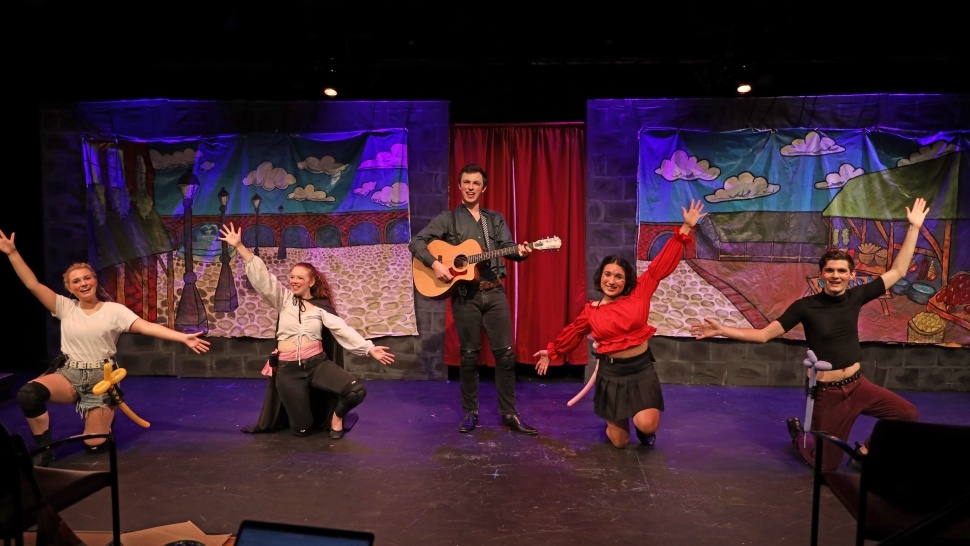 All the world’s a stage, and New Works SA is merely a student startup trying to change the world of theater. Founded by Wren Ramos ’22, Scarlett Patiño ’23, and Anthony Tresca ’21, New Works SA is a nonprofit theatrical education program designed to make theater accessible in areas where the arts are underserved. They envision a space where theater is for everyone, and everyone is included.

“We want to bring theater to middle schools and high schools in parts of towns where theater isn’t really accessible at the moment,” Patiño says. “We want to give them the chance to tell their own stories.”

As one of five Stumberg Prize finalist teams, New Works SA is dedicating the summer to further developing its vision to democratize theater. The group’s personal experiences in the arts showed them the powerful ways theater can change one’s life. Their mission? To extend that life-changing inspiration to the younger generation of artists. “Theater has given the three of us a community,” Ramos says. “We want to be an after school program for somebody who needs that safe place to be, that safe place to create, and that safe place to find a community.”

In being able to provide that community to everyone, the team decided to form a nonprofit organization because of their firmly held belief—and in turn adopted slogan—that theater is for everyone. “It didn’t feel right to try to profit off of this and gatekeep theater any more than it already is,” Tresca says. “Making our organization a nonprofit was the only way to go.” 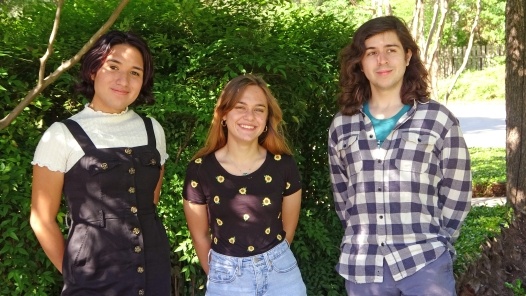 The three young theater professionals are ecstatic about their venture’s mission to spread their love for theater and extend the artform to the newest generation of young creatives. However, in reflecting on the process of creating their startup, the team recognizes the challenges of developing a business from the ground up.

“While we’ve loved the experience of creating this wonderful community and supportive creative environment, one of the hardest things about this process is learning the business side of theater,” Tresca says. “We know the theater side, but the business side is a whole new world.”

Luckily, the founders’ Trinity education has provided all of them with the skills necessary for adjusting and learning the ins and outs of business development. Patiño, from San Antonio, is not only a theater major, but she supplements this with an additional major in business. Ramos, a theater and communication double major from Houston, has extensive background in marketing. And Tresca, a political science major and theater minor from Mineola, Texas, is experienced in the leadership and organizational skills it takes to see a production, idea, and now business into fruition.

Top all this off with support from Trinity’s entrepreneurship program: As competitors in the Louis H. Stumberg New Venture Competition, New Works SA was able to gain their first major round of funding. Through the competition’s summer accelerator, New Works SA has access to business development classes, networking events, and collaboration with professionals and mentors in their industry of focus. 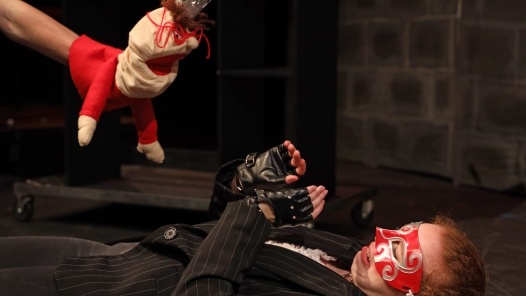 “Being able to get the different perspectives from the experts that the entrepreneurship program has brought in is one of the highlights of working on this startup,” Patiño says. “It’s been really refreshing to hear a lot of different voices about our idea, because no idea and no startup is going to be successful in a vacuum.”

For New Works SA, Trinity seems the opposite of a vacuum, where students are often described as “more than their major.” “Not only could we be involved with the University’s shows, but we also have the opportunity to produce our own shows completely independent from the University,” Ramos says. “Being able to have that hands-on experience is invaluable in this industry, and we wanted to extend that to those who may not have access to that kind of experience.”

New Works SA’s educational components will prioritize this ability to create original pieces of theater and educate students about the production process from beginning to end. In expanding on the organization’s values, Ramos explains how important it is to see a story that represents you.

“There’s something really empowering about the ability to put on a show that is original to you,” Ramos says. “You’re not often taught how to put on your own work; you’re taught how to act other people’s work. We want to show that there is space for new topics and creations in this area.” 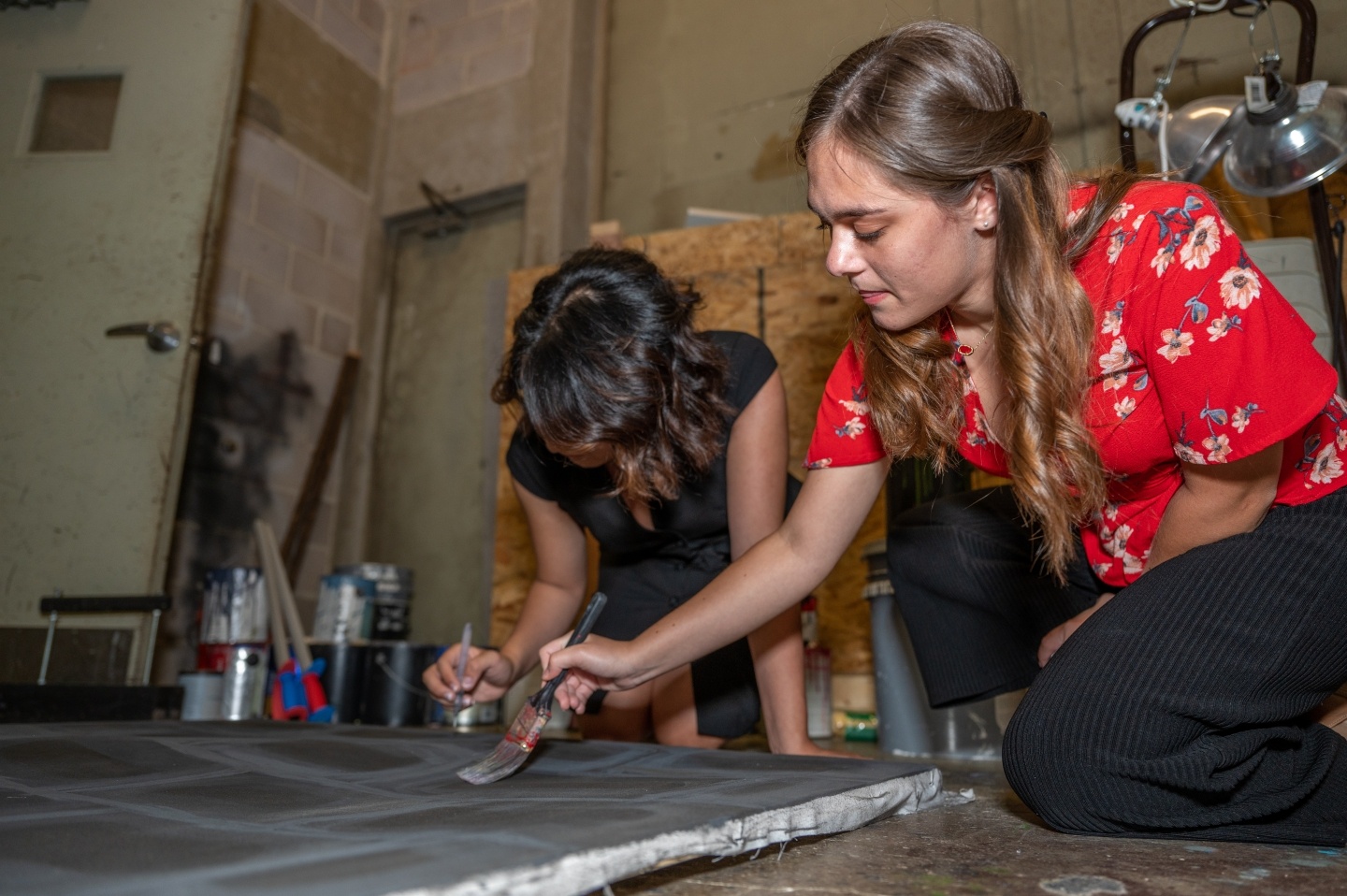 “We also acknowledge that there are existing nonprofit theater spaces in San Antonio and in the greater Texas area,” Patiño says. “However, these other places are focused on performance, such as acting, singing, and dancing. We want to provide children with the added opportunity to have a more well-rounded knowledge of theater, including lighting, set design, directing, and much more.”

Up next for the New Works SA team: the first of many original theater performances. The Comedy of Romeo & Juliet premiers for Trinity students, faculty, and staff on Friday, July 16 in the Trinity Attic Theatre, with two more shows to follow. Reservations for tickets for these in-person shows can be made by visiting the team’s instagram, @newworks_sa. Tickets are $10 with an open donation to help New Works SA get their program into schools. The production will premiere on YouTube in August for the general public.

“Getting to work on what will be New Works SA’s very first original show, The Comedy of Romeo and Juliet, has been one of my favorite aspects of getting this venture started,” Tresca says. “We completely funded the show grassroots style through donations and being able to see our production go through all the different stages of production has just been an absolute joy.” 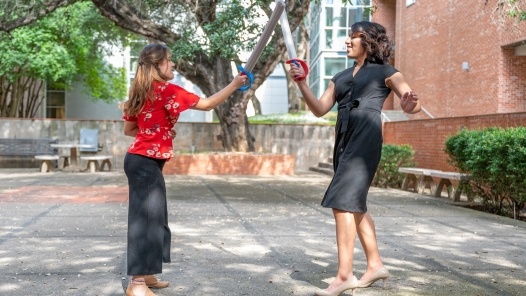 Wren Ramos ’22 and Scarlett Patiño ’23, two of the co-founders of New Works SA, play with prop swords in the Ruth Taylor Courtyard.

Mariel Clark ’22 is a communication major and economic minor who helps tell Trinity stories as the development writing intern for the Office of Strategic Communications and Marketing.