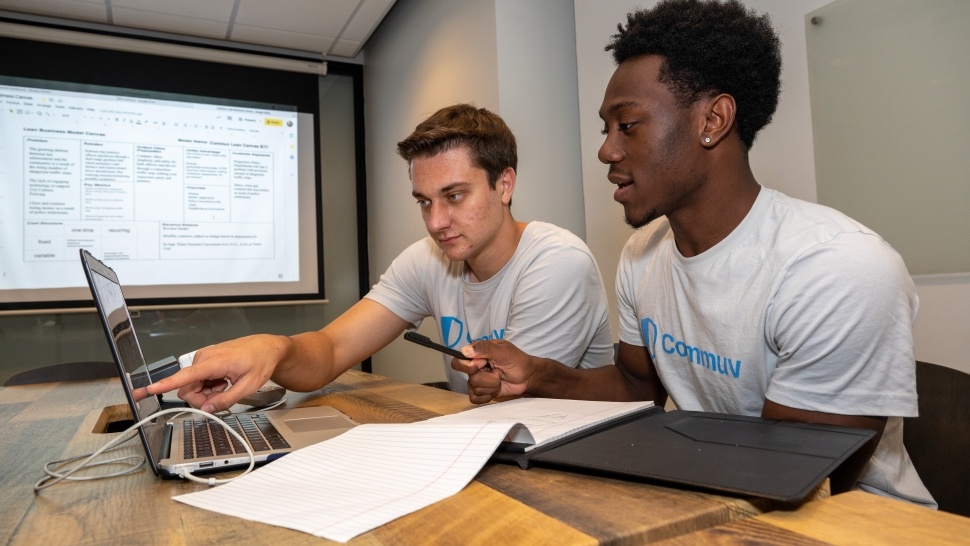 Picture this: A police officer sees a car with a broken tail light. Per protocol, the officer turns on his lights, starts his siren, and guides the driver to the side of the road. In a unique change to this routine traffic stop, neither the police officer nor the driver exit the vehicle. Instead, the entire procedure is conducted safely over the phone using video communication.

This is the vision behind Commuv, a startup founded by Trinity student entrepreneurs Jalen White ’23 and Michael Marquez ’22. Short for “Communication on the Move,” Commuv seeks to incorporate a mobile application into the way police officers approach traffic stops. The pair comprises a team selected as one of five Stumberg Competition finalists participating in this summer's accelerator program.

“We’re two basketball teammates that turned business partners because we recognized an opportunity to improve transparency between law enforcement and the community,” says White, an international business major from St. Louis. “We wanted to create a unique solution to de-escalate traffic stops, thereby making them simpler and safer.” Yet the pair’s companionship stems beyond just business partners and teammates. The two are bonded by their passion to bridge relationships between the community and law enforcement.

“With Commuv, we aim to eliminate any unnecessary tension between the officer and the driver,” says Marquez, an engineering science major from Phoenix. “In a post-COVID world, we’re already practicing virtual communication, so let’s apply that to the traffic stop.” While this new approach is exactly that—a reimagined approach to routine traffic stops—Marquez notes that they see Commuv as a supplement to police officers’ current traffic stop procedures, not a replacement. “We see this as more of a tool for the officers—another tool in their toolbelt,” Marquez explains. 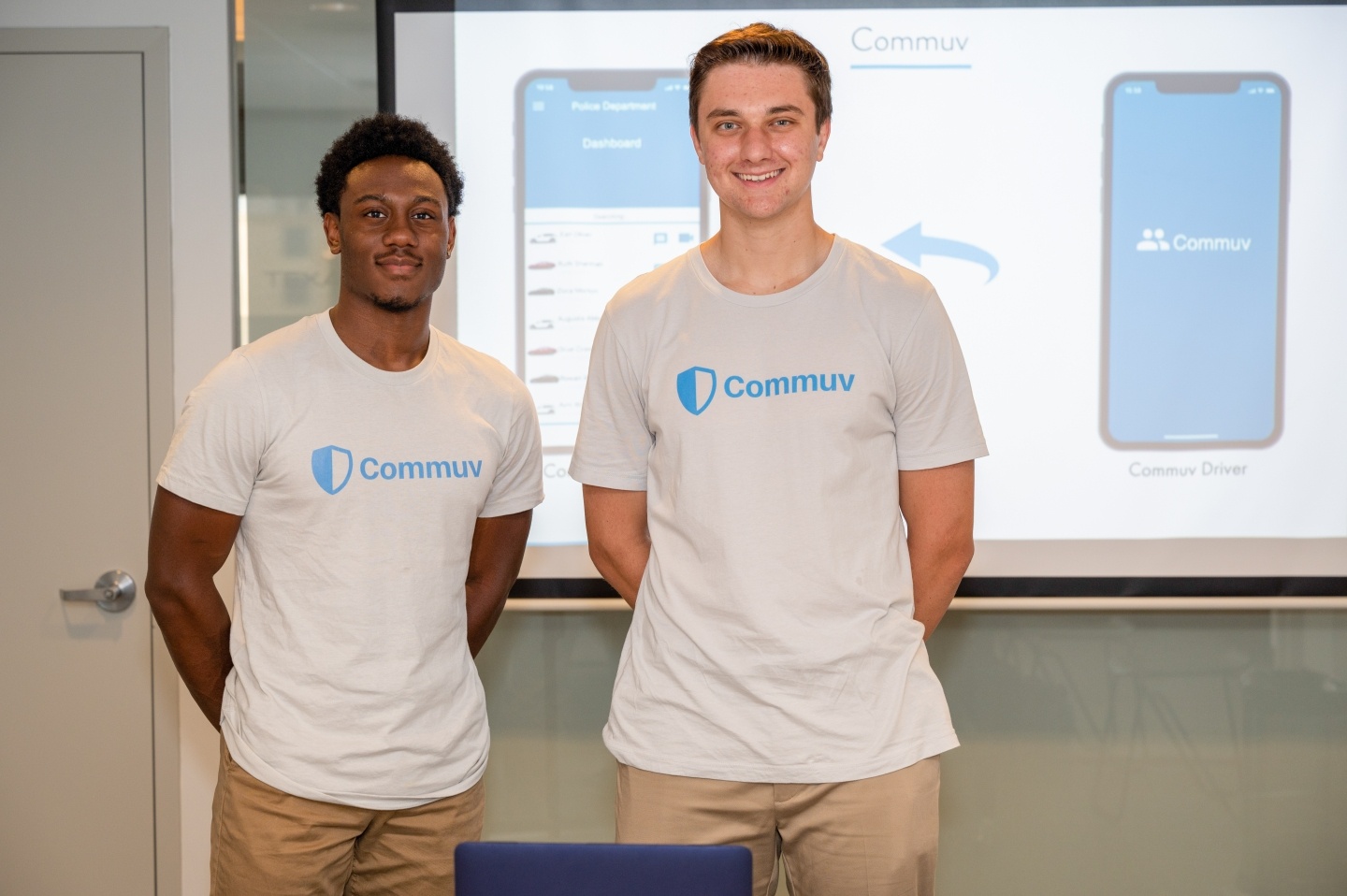 “Commuv has actually been evolving for about the last year or so,” White says. As a young driver, White found sifting through his car’s license and registration documents to be more disorganized and confusing than it needed to be. After listening to similar experiences from friends and family, White wanted to create an app that stored all of the driver’s necessary information on their phone, accessible with a simple click of a button. “We received some feedback from a couple professors and while our original idea didn’t quite pan out, that idea turned into another idea, which then turned into the Commuv you see today,” White continues.

White and Marquez are focused on working towards better understanding the industry, meeting with police departments, and surveying citizens about their opinions of Commuv. In speaking to the challenges of their startup, the business partners acknowledge that Commuv is both very expensive and very ambitious.

“It requires a lot of outside advising and collaboration,” White says. “Really interpreting and understanding all the different aspects of this business is a big learning curve for us, but that’s why we’re here.”

“Here” meaning Trinity’s Stumberg Accelerator, part of the University’s entrepreneurship program supporting student ventures. Directed by Luis Martinez ’91, Ph.D., the Center for Innovation and Entrepreneurship supports students of all academic interests as they embark on their first ventures. The Louis H. Stumberg New Venture Competition is one of the ways the program assists students in gaining their first major round of funding and provides these students with the opportunity to work on their startup full-time over the summer. 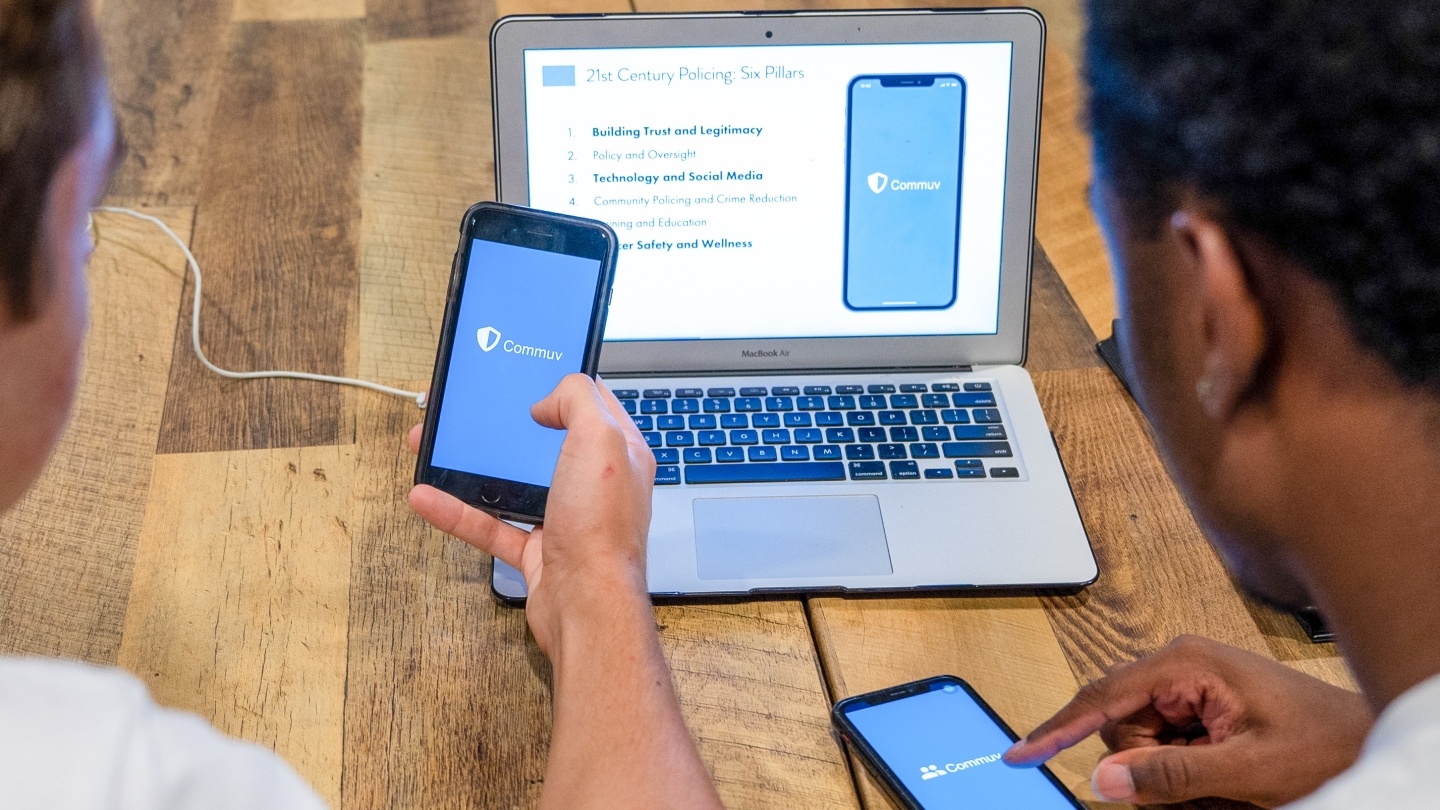 “Through the Accelerator we’ve been able to work at the downtown Geekdom office, which is a collaborative space for anyone working independently or developing their own ventures,” White says. Not only does this provide a physical space in one of San Antonio’s most prestigious coworking communities, but it allows White and Marquez to network and make connections with other social entrepreneurs.

Learning the ins and outs of software development, law and order, and civil safety hasn’t been easy, but the pair continue to look to mentors and each other as they work towards a meaningful contribution. “We recognize that we’re seeking a greater change and that change is not going to change itself,” White says. “We’ve had some hard times, some pivots, and some conversations, but time and time again I rely on my faith to get me through it.”

In the epitome of what it means to be a teammate, Marquez notes that he “relies on Jalen” as they work together to envision Commuv. “He keeps me accountable. I know cofounders is the correct term, but I respect his drive, I respect his initiative, and I hope to do this with him for years to come.”

Following the conclusion of their time in the Accelerator, White and Marquez will continue to hone their concept of Commuv, vying for the top prize in the Stumberg Competition’s final round. As the pair continue to seek a way to help those in need, they reflect on how building this venture is one of the ways the two best know how to support the community. “I hope people recognize and understand we’re trying to make communities safer,” Marquez says. “It takes every community member’s and every police officer’s cooperation and trust.”

“We’re making this for the community and we want the community to know they can work with us to offer any thoughts on improvement and any sort of feedback,” White adds. “This is for them, so we need them to be at the center of what we do.”

Mariel Clark ’22 is a communication major and economic minor who helps tell Trinity stories as the development writing intern for the Office of Strategic Communications and Marketing.

Summer on the Hill

Monday, August 30, 2021
This summer, if you called your Congressperson, there is a good chance you…
The Trinity Story
Students