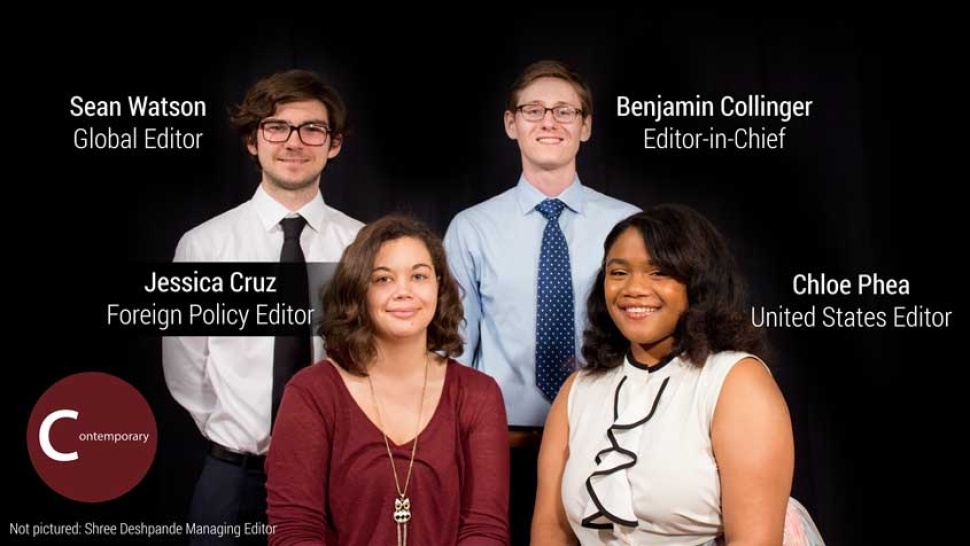 When Benjamin Collinger ’19 arrived at Trinity from St. Louis, he searched for a forum where students could publish research about modern political issues. After his quest yielded no results, Collinger set out to remedy the situation and founded the current affairs journal The Contemporary. The goal of the publication is to serve as a platform for undergraduate thought leadership, advocacy and dialogue. Collinger hopes to engage students of all political persuasions.

In the inaugural edition, which published in January/February 2016, the journal touched on the International Criminal Court, China’s maritime strategy, the ideology behind fair trade, abortion, and other current topics. Collinger says he was motivated by the thought that many times, students’ papers or research often go unread by anyone other than the professor and the student.

“There is a lot of knowledge out there and arguments that Trinity people make that are important for other people to read,” Collinger says. “This journal showcases those things.”

To create a publication that would prosper long after he graduated, Collinger assembled a five-member student editorial board with two faculty advisers, political science professor Rosa Aloisi and religion professor Simran Singh ’06. Aloisi, a specialist in international human rights, says her duties as an adviser are to listen to students and to develop strategies for the journal’s longevity.

Aloisi hopes that students realize that The Contemporary offers a unique opportunity to publicize the work they complete for class.

“I would like students to understand that the learning experience does not end in the classroom,” Aloisi says. “The work students do is meant to have an impact and I want to make sure they are writing about something they care about.” 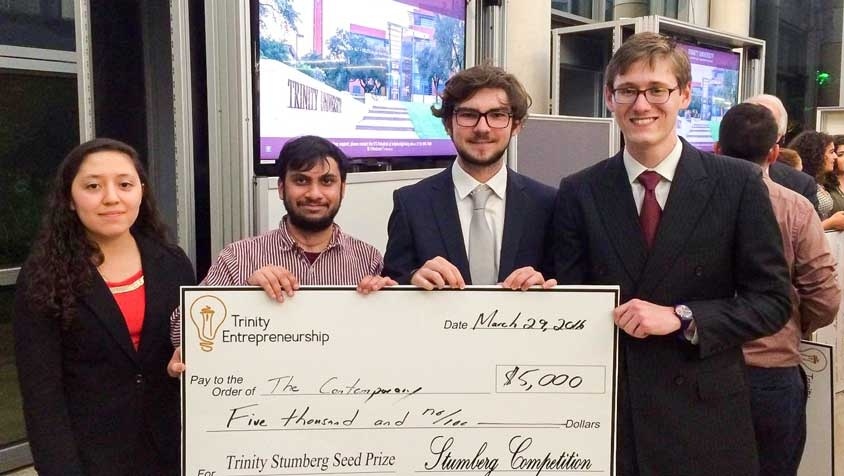 After registering the organization with Student Involvement, The Contemporary turned to the Student Government Association for initial funding so that the journal could publish in print as well as online. Collinger plans to solicit local business to place advertisements in the publication. In March, The Contemporary earned $5,000 in seed money at the second annual Stumberg Competition.

Collinger calls for a greater discussion of current events and believes that “it is important for any U.S. citizen to know what is going on within the U.S. and throughout the world.” He adds that even students not majoring in political science or international studies can benefit from studying how society operates and what is happening in the world. Collinger envisions The Contemporary as a bridge between students and their academic achievements.

Additionally, Aloisi says that publishing within The Contemporary is good practice for students who might become academics writing for specialized research journals. She encourages students to get creative when considering what to submit to the journal and think deeply about what type of research has a political impact. Any Trinity student can submit articles to The Contemporary at thecontemporaryjournal@gmail.com. The journal can also be reached on social media at @TUContemporary and facebook.com/thecontemporarytu.