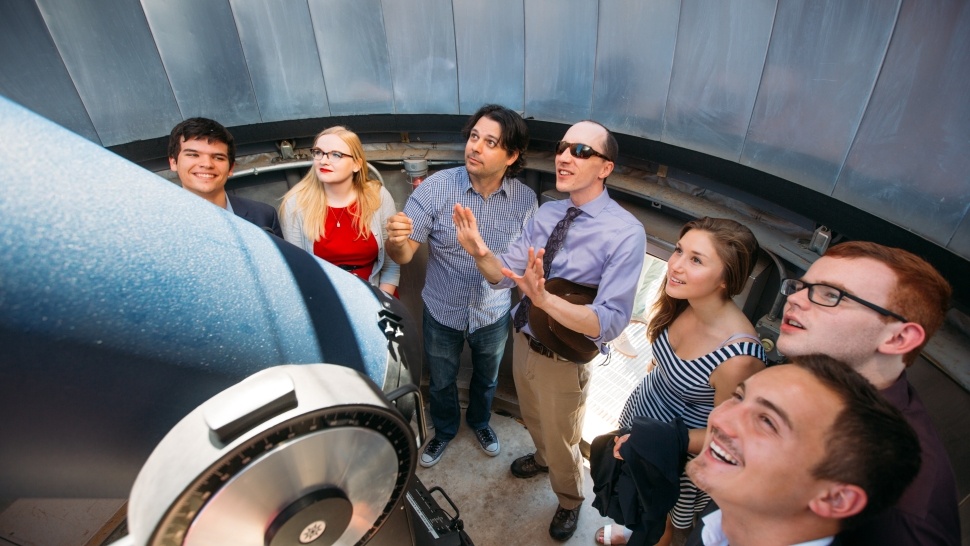 Deep in the underworld, Isaiah Mitchell ’20 still had a clear view of the stars.

Mitchell, a classical studies major who spent his summer researching the myth of Orpheus—a tragic Greek hero who traversed the depths of Hades —was part of a 5-day Trinity experiment in May that sent a mix of classical studies and physics students to the McDonald Observatory in Ft. Davis, Texas, home to the massive, 160-ton Harlan J. Smith Telescope.

The trip served as a “creative space” for both sets of students to collide.

“Being around that telescope, no matter what you’re studying, gives you a sense of perspective,” Mitchell says.

During the trip, the physics bunch—Matthew Jenkins ’18, Brian Guerrero ’20, Jordan Koeller  ’19, Jared Tincher ’20, Marshall Tickner ’19, and Frances Stone ’19—helped Pooley study supernovae, or titanic explosions from dying stars. The classical studies duo of Ariana Fletcher-Bai ‘20 and Mitchell, on the other hand, launched an ongoing project to catalogue thousands of classical literary references, such as names, places, artifacts, or larger themes, in modern science fiction books, movies, and other media.

“My physics students got to see how world-class physics is done with this huge telescope,” Pooley says, while Stevens notes his pair of young researchers got experience “sifting through massive amounts of data.”

Beyond this research, both teams got a chance to look at the universe through different lenses, says Koeller, a physics major.

“In sciences you think about spatial distance, but Ariana and Isaiah approach the galaxy from a viewpoint of the mythology behind the stars,” Koeller explains.

Both groups seemed starstruck when they arrived at the remote, West Texas observatory, Fletcher-Bai says. At night, there are no man-made lights within eyesight.

“You can see these stars that are millions of miles away, but it’s so black outside you can’t see your hands,” Fletcher-Bai said. “It was a kind of spiritual moment.”

The trip wasn’t all glamorous. Just getting to the observatory required the 10-person group to pile into a van for a 10-hour round trip from Trinity, says physics major Frances Stone.

The observatory itself, dubbed by the Trinity group as a “ski lodge for astronomers,” made for an intimidating locale. Looming over both sets of students, like a monstrous cyclops of classical myth or armored behemoth from a sci-fi blockbuster, was the telescope: a 32-foot high, 50-year-old giant, imprisoned for eternity in a 70-foot-tall, glistening-white rotunda. 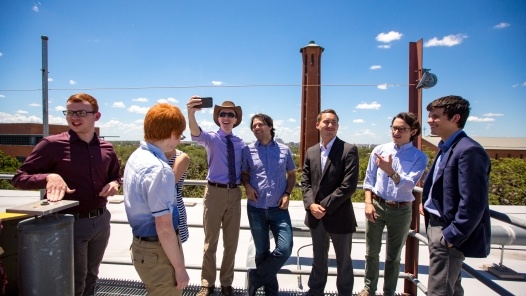 After the trip ended, both groups went on to 10 more weeks of research as part of Trinity’s summer undergraduate research program, funded by the Andrew W. Mellon Foundation, the McNair Scholars Program, and the T. Frank and Norine Murchison Faculty Development Fund Research Corporation, among other grants. During this period, long after the trip was over, Pooley and Stevens saw the true benefits of their journey to the observatory shine through.

“Working next to these physics students, watching how rigorous their work habits were, that was enlivening for my two classics students,” Stevens says.

“Seeing these two very different groups of students come together, and be able to explain their research projects together to the point where everyone could understand each other, that’s incredible,” Pooley says.

Mitchell says he’ll always remember to take a break from the grind of research to look up at the stars.

“When I went home this summer, I started stargazing with my family,” Mitchell said. “As long as it’s dark, you can do that wherever you are.”

Jeremy Gerlach is Trinity University's Brand Journalist, and he only gets the chance to stargaze during his yearly holiday trip to his parents home in rural North Carolina.