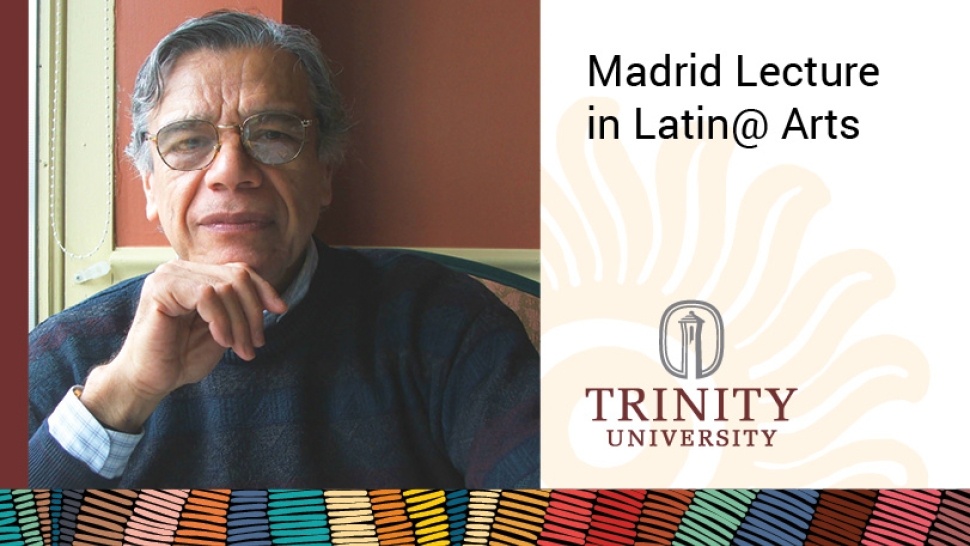 Effective Tuesday, March 17, 2020, all Trinity University events, on or off campus, are canceled or postponed. This decision reflects the University’s desire to protect members of the Trinity community, as well as guests and visitors to campus or at Trinity-sponsored events off campus. All updated events information can be accessed online at events.trinity.edu.

Villanueva discovered the power of language through the poetry of Ruben Darío and José Martí during his military service in the Panama Canal. He subsequently expanded his knowledge and appreciation of both English and Spanish language poetry while a student at Texas State University and at The State University of New York at Buffalo. Written masterfully in both Spanish and English, Villanueva’s first published collection of poetry, Hay Otra Voz, draws on both poetic traditions.

In Hay Otra Voz and his subsequent poetry collections, Shaking off the Dark, Crónica de Mis Peores Años, and Primera Causa, Villanueva gave voice to the world, the life experience, and the cultural expression of his Tejano community. In so doing he established himself as one of the outstanding poets to emerge out of the Chicano Movement of the 1960s and 70s. His book-length poem, “Scene from the Movie GIANT,” which was awarded the 1994 American Book Award for Poetry, established him in the first ranks of American poets.

Villanueva is also the editor and author of a pioneering anthology and study: Chicanos: Antología Histórica y Literaria. He is the founder of Imagine Publishers and the founding editor of Imagine: International Chicano Poetry Journal. Texas State University has honored him with both a Distinguished Alumnus Award (1995) and a Distinguished Alumni Achievement Award (2015).

Norma Cantú, Ph.D., Norine R. and T. Frank Murchison Endowed Chair of the Humanities says of Villanueva's work, "In his groundbreaking publications, Villanueva brings a distinctly Chicano poetic voice to the canon and opened doors for numerous other Chicana and Chicano poets." She adds that the Madrid lecture "provides a forum where we celebrate Chicanx artistic forms," and notes that the previous lectures included Chicana playwright Cherrie Moraga, muralist Judy Baca, and poets Carmen Tafolla and Rosemary Catacalos.

The Madrid Lecture on Latin@ Arts is a vibrant example of the way Trinity University connects San Antonio and the world through deep conversations and cultural experiences.The lecture is sponsored by the Belo Corporation's Board of Trustees in honor of professor emeritus Arturo Madrid, the Norine R. and T. Frank Murchison Distinguished Professor of the Humanities (1993-2017), who served on the Board of Trustees; the fund has since been augmented via contributions from Antonia I. Castañeda and Arturo Madrid; and by Trinity’s Department of Modern Languages and Literatures, the Department of English, Trinity University Press, the Humanities Collective, and the Mexico, the Americas, and Spain Program.

The event is free and open to the public. More information is available online at events.trinity.edu.

Carla Sierra is the manager for public relations in Trinity's Strategic Communications and Marketing Department. She can be reached at csierra@trinity.edu.