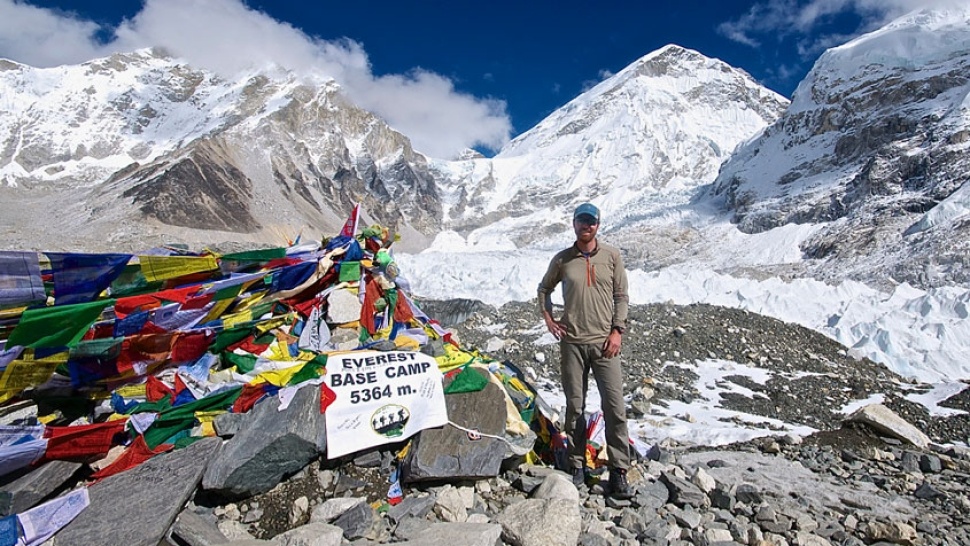 When Kevin Gallagher says, “Hike,” he is not talking football. He’s talking HIKE. As in a remote solo trek across the trackless bush of South Africa’s Drakensberg escarpment or a 900-mile, 58-day expedition across New Zealand’s South Island.

A long-time outdoor enthusiast, Kevin’s appetite for adventure travel was whetted in 2011 when a friend invited him to crew a sailing trip from the Canary Islands to St. Lucia. At the time he was an attorney in Washington D.C. practicing clean energy technology development, nuclear energy policy, and other environmental issues.  But after “gestating for several years” that unforgettable, 22-day experience following Columbus’ fourth route across the Atlantic ultimately inspired him to leave his legal career in favor of a life outside the office walls. “It was risky to leave the certainty and security of my legal career to pursue my current adventures,” he admits, “and I have faced many challenges along the way, but I’m incredibly satisfied with my [new] career path.”

The adventure began with his 7Trails project.The goal? Hike the best long-distance trails—a minimum of 100 miles each—on all seven continents. Since setting off in 2014, Kevin has traveled to 51 countries and covered nearly 4,000 miles on trail. Along the way he obtained his skipper’s certificate from the American Sailing Association and improved his French.

In between big hikes, he pursued “whatever interesting experiences came [my] way,” and there were many: a 3,000-mile 4x4 road trip around Namibia, climbing Ecuador’s Mt. Chimborazo (20,548 ft.), attending festivals like the Victoria Falls Fest in Zimbabwe, and sailing off the coasts of Thailand, Montenegro, and the Seychelles, among others. He fondly recalls one memorable birthday spent in a mountain refuge in the Swiss section of the Tour de Mont Blanc with an American friend, some Finnish hikers, and the refuge proprietor. Midway through a seemingly unending evening of great food, amazing local wine, and fascinating conversation, the proprietor went to the wood stove and returned with a freshly baked birthday tart made with blueberries he had picked that afternoon. “All in all, it was a perfect travel experience.”

Not every adventure is that idyllic. Kevin has run into his “fair share of bears, venomous snakes, and medical emergencies on the trail,” but insists, “Those encounters aren’t very remarkable at this point.” He’s also been lucky. Thanks to a weather delay in Nepal while preparing for an 18-day trek around the Annapurna Circuit, Kevin narrowly missed being on the Himalayan mountain trail when a series of avalanches killed 43 hikers and injured dozens of others.

Motivated by Seneca’s dictum “nothing is ours except time,” Kevin is using his to create a “location-independent lifestyle that allows me to pursue adventures in beautiful places around the world. ” Toward that end, he transformed his project into 7Trails, an outdoor adventure brand and media company with a portfolio that includes work as an adventure guide, author, and photographer. His photography has been featured in several exhibitions and in major outdoor equipment retailers’ websites and print publications. His Hike the World: The Guide to the Planet’s Best Trails is a written and photographic guide to the 30 most iconic and inspiring multi-day trails in the world. Kevin also consults for Centennial Generating Co., a Rwanda-based solar power company that delivers cheap and reliable power to clients throughout Africa. In addition, he established the 7Trails Foundation, a non-profit 501(c) whose mission is to provide educational outdoor experiences to underprivileged youth in developing countries.

Kevin is focused on getting his 7Trails Foundation up and running and preparing for his next adventures, which include an extended trip that will take him to trails from Morocco to Mongolia and a 2019 trip to Antarctica, the final piece of his 7Trails project. Long-term plans include growing the 7Trails brand and Foundation, leading more expeditions in amazing wild places around the world, and publishing a second edition of his book. He also wants to remain involved with Centennial Generating Co.

When not on an adventure, Kevin can be found in Santa Barbara, Calif., usually at a downtown coffee shop, running the front country trails, or at East Beach playing volleyball, a love he picked up at Trinity. While at Trinity, he played on the baseball team and developed a close relationship with Trinity Trustee Baker Duncan, “a wonderful mentor and one of the most formative educators in my life.” He sends congratulations to baseball Coaches Scannell and Smith, former TU Coach Bunch and the rest of the 2015-16 TU baseball team for their National Championship.  ”You've made all of us former Tigers proud.”