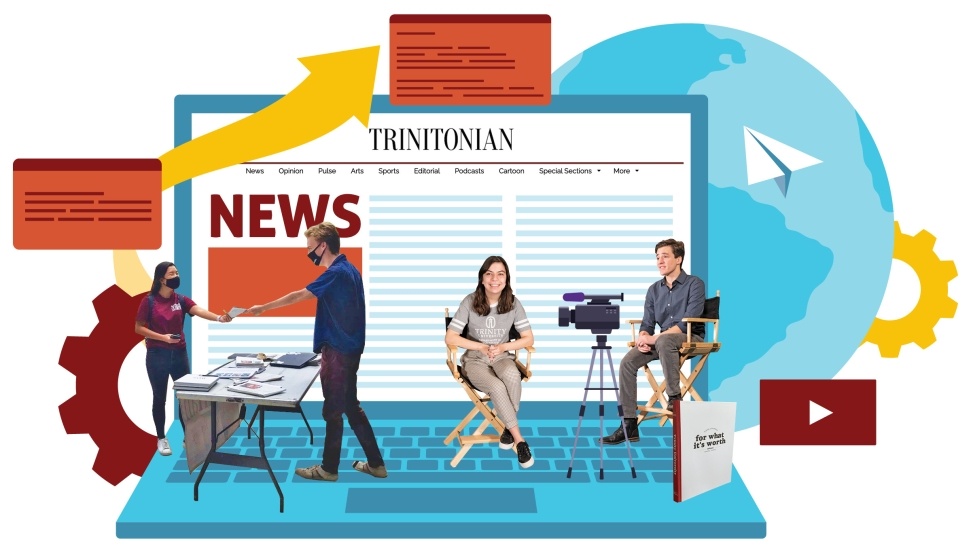 Stories, whether told through words, pictures, or a screen, have a connective power.

At Trinity, there’s no better example than the students leading the University’s student-run media: the Trinitonian newspaper, the Mirage yearbook, TigerTV, and jazz radio station KRTU. Across these radio waves, television cameras, and computer screens, Tigers are connecting audiences throughout Trinity’s community by documenting a historic chapter of the University’s story: one filled with resilience and innovation in the face of new challenges.

As Trinity’s campus seemed impossibly fragmented during a disruptive pandemic, the students who run TigerTV, KRTU, and campus publications pivoted drastically to develop new skills and abilities needed to bring the Trinity story to the community. Regardless of their individual roles, each of these students share one critical characteristic: They have emerged as leaders, creating a connective tissue for Trinity’s community through storytelling. 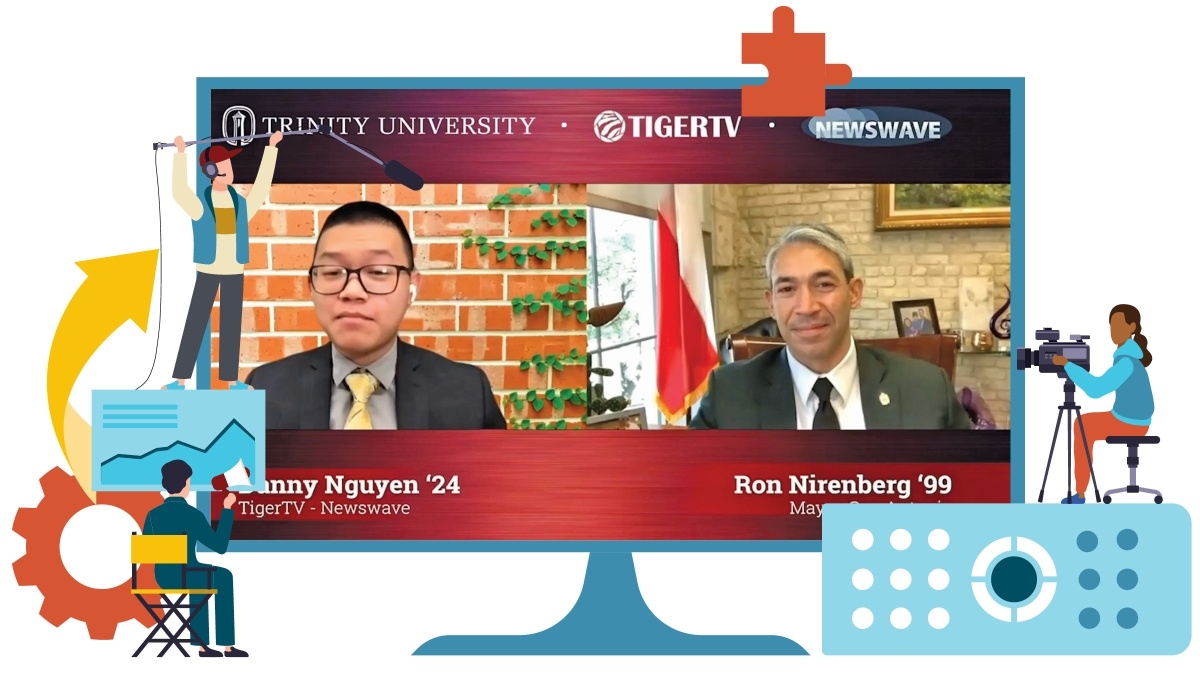 At TigerTV, students are always looking for a fresh take on current events. Run out of Trinity’s Department of Communication, this professional-level, student-run television station operates three shows: Newswave (hard news), Studio 21 (entertainment news), and the Not So Late Show (sketch comedy).

But when most of a college campus goes remote, how does a student news crew pivot?

If you’re an executive producer like Natalia Salas ’21 or a package producer like Danny Nguyen ’24, you do it by constantly looking for a new angle. Salas, a communication major from Houston, runs Studio 21 and is responsible for editing all the show’s segments together on a weekly basis.

“This year we’ve had to be really creative with the ways that we make the shows because we can’t be in person. Ordinarily we would come up into the studio every day that each show is filmed, but this year we’ve had to find ways to create the shows remotely,” says Salas, who manages a mix of 12 veterans and newbies, “all reliable and amazing.”

For Nguyen, a marketing major from San Antonio who works for Newswave, finding fresh ideas is as simple as giving each member of the team a chance to shine, regardless of class year or background. “TigerTV has real openness for people of all backgrounds and all majors to work together to create these engaging and new products,” he says. “And that really highlights what Trinity and TigerTV are all about: that collaboration, working together to create something new.”

Salas says this collaborative approach has worked wonders during a year where she was worried students might not even want to show up to work. “I was proud to see that so many students stepped up and got super creative with the way that they made the show,” she says.

Salas beams as she recounts how her team pitched original (and safe) ideas for TV segments that would help highlight the vibrant scene both on and off campus. After being shipped their camera equipment, instead of having to come into the Richardson Communication Center every day, the creative minds of TigerTV developed content such as “What’s the TriniTea?,” a hilarious student-on-the-street gossip segment where students are grilled with questions such as differentiating One Direction lyrics from Shakespeare quotes.

“It’s silly, but it gives you this sense of normalcy, having something else to talk about besides COVID-19,” Salas says.

Nguyen and other students are quickly mastering a remote model of TV production with virtual interviews, connecting campus with Trinity President Danny Anderson, San Antonio Mayor Ron Nirenberg ’99, and other local leaders. Across each of these conversations, Nguyen says he sees a theme emerging in Trinity’s story:

“I see this kind of collective unity throughout the Trinity community where we really want to show everyone that we’re more than this little liberal arts college in San Antonio. We are made up of diverse people from different backgrounds and different ideas and cultures and political views, and we can come together and create these new and big opportunities that hopefully will create long-lasting, positive consequences for the community and beyond.” 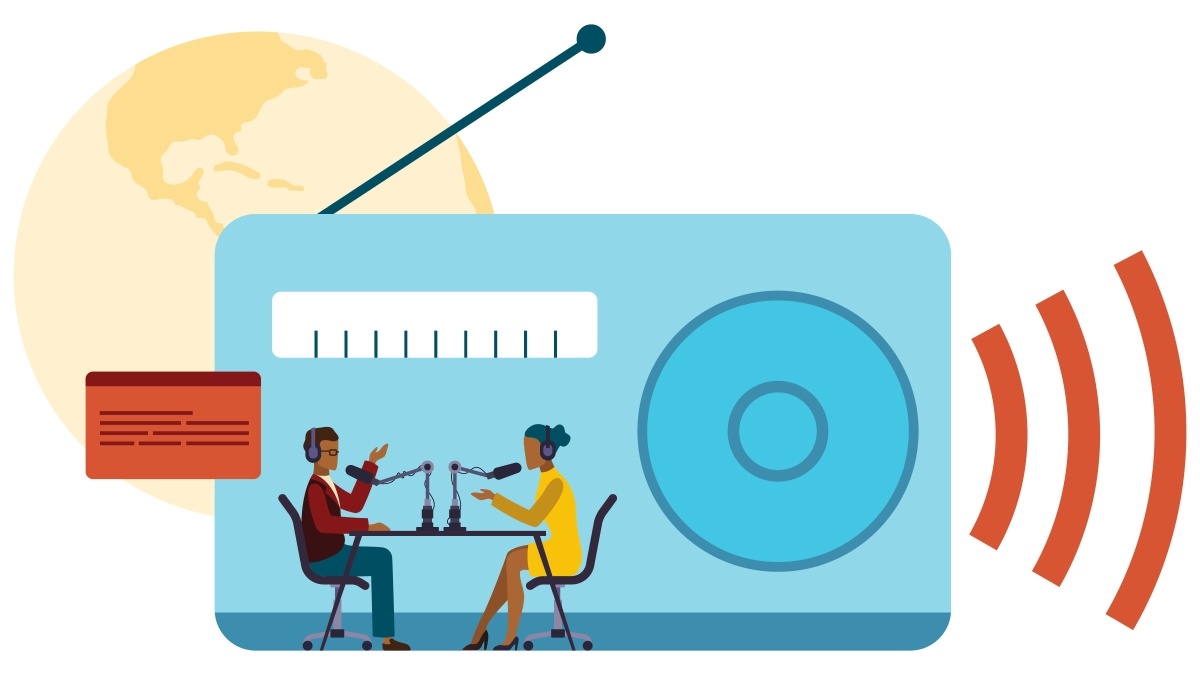 Shifting to a partially remote campus has disrupted the tempo of every Trinity student’s life. Still, Sarah Hadsell ’21, a music education major and KRTU intern, says a change of pace isn’t always a bad thing.

Now a senior, Hadsell recalls settling into a smooth life at Trinity’s jazz and indie radio station during her sophomore year, before the current state of the campus. After taking a radio hosting class with KRTU music director Kory Cook, she went on to learn about the systems and software needed to be a live radio host and then worked on a live show her next semester. Hooked, Hadsell started writing for the KRTU blog and handling social media, then began her current stint of working with music promoters to identify and chart rising performers.

“At KRTU, Kory, (general manager) JJ Lopez, and (station manager) Monica Reina put my learning above everything else. They help me develop skills that I can use in the real world, even outside of radio,” Hadsell says. “The things I’ve learned here will help me with teaching and connecting.”

At KRTU, Hadsell notes she has been able to learn a variety of new skills. “I’m not stuck just doing one thing,” she says. “I’m learning about producing, curating shows, the music industry as a whole, and how charting works.”

And while KRTU was popular with San Antonio and Bexar County audiences pre-COVID-19, Hadsell says more people are turning to good music during stressful times. “Art, movies, music ... listening to a good album that I just heard about—that’s what has kept me going through all this,” Hadsell says. “Art is important, especially when we don’t have access to many of the things we normally do.”

The disruptions of the past year have meant more personal changes for Hadsell. She’s learned how to use Adobe to do her own audio editing—a skill she hadn’t ever imagined needing before realizing she was about to be cut off from other members of her station who usually did that type of work. She’s also had to get better at making more time for her own music, since practicing voice and piano at Trinity in 2020-21 now means having to schedule time in Trinity’s practice facilities instead of just walking in on her own schedule.

When you’re challenged, Hadsell says, don’t forget to find time to listen to yourself. “Go easy on yourself,” she says. “I came into college as a neuroscience major, and it was hard to find what I was passionate about. Let yourself make mistakes, and learn from them. 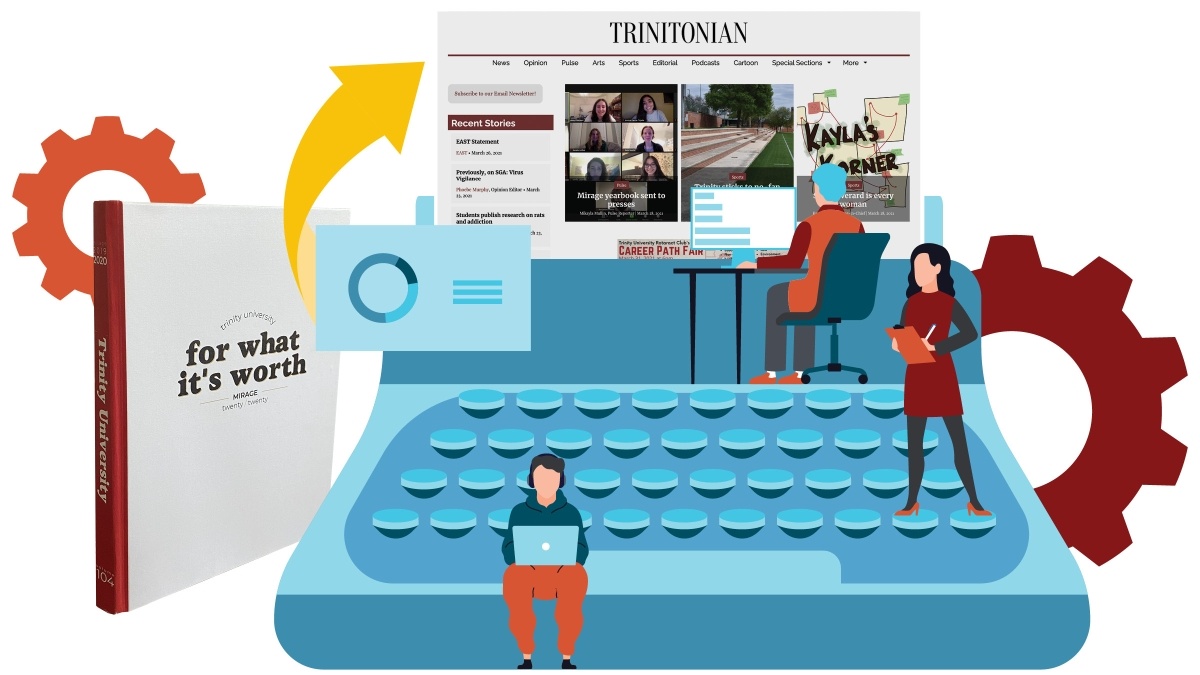 If a college yearbook is a snapshot of “a year in the life,” Trinity’s 2021 Mirage has captured a historic moment.

Abigail Ghorbani ’21, the managing editor of the Mirage, says her staff has worked around the clock to document a year unlike any other. From social distancing, masks, and virus testing to disrupted sports schedules, Trinity’s campus has never looked so different.

“I think the story our photos are telling is one of innovation,” Ghorbani says. “This yearbook is going to be very different from previous years, which is why we’ve titled the book ‘Not Exactly.’ Trinity students have experienced a lot of change, so we’ve in turn had to change almost everything we did to put this yearbook together.”

Along with editor-in-chief Hunter Nardiello ’21, Ghorbani first applied to lead the Mirage staff back in the spring of 2020. After hearing back that she’d gotten the job a week before spring break, she left campus only to get stuck at home as Trinity shifted to remote operations.

Even with campus partially opening back up in the fall, Ghorbani ended up staying at her home just south of Houston. Working remotely, Ghorbani would be tasked with helping Nardiello and the Mirage staff put together an entire yearbook.

The challenges, Ghorbani says, were immense. The yearbook depends on portraits of students and faculty and action shots of sports clubs and organizations—all difficult to get during a pandemic. Thankfully, Ghorbani says her team had a record-breaking level of interest for yearbook staffers. “We’ve never had as many people apply as we did this year,” she says, “so we were able to hire a really great staff.”

After assembling a fantastic team of on-campus photographers, Ghorbani says she and Nardiello told them, “‘Carry your camera everywhere. When you see anything interesting, take a picture.’ And they did a really good job of that.”

As Nardiello graduates, Ghorbani says she’s interested in taking the lessons she’s learned this year into a potential stint as editor-in-chief herself. “I’ve always been someone who’s loved having everything planned out, but this year has challenged me to be more flexible,” she says. “Taking tough classes, having a leadership role, all while living at home the entire time—every Trinity student has had to adapt to so much.”

For Kayla Padilla ’21, editor-in-chief of the Trinitonian, a newspaper helps bind people together by connecting the experiences of readers.

Padilla, an English and anthropology major from Edinburg, Texas, came to Trinity unsure of her own place in the world. But it didn’t take long for her to start finding it: She’d always wanted to study English, but she soon discovered a passion for anthropology. She also joined Trinity University Latino Association and worked with the Office of Diversity and Inclusion, helping other students feel welcome in the Trinity community, too.

But when she started writing for the Trinitonian as a sophomore, she says, “It felt like an outlet to express myself that I’d never had before. I felt that people were reading what I had to say, and what I had to say mattered.”

Tucked downstairs in the Coates Student Center West Wing, just past the campus mailboxes, the Trinitonian newsroom had hummed for years with the same energy and enthusiasm that comes with any room full of reporters, designers, and editors. Students tapped away on keyboards, drafting their articles and designing the pages of the paper—until Spring 2020.

But at this same time, Trinity’s campus had just started coming to terms with the true impact that an international pandemic would have on in-person operations. “We were all naive when we thought this would only last two weeks,” Padilla says. “And I was angry: Of all the years for this to happen, why did it have to be during the year I was editor-in-chief?”

Returning to campus in the fall, Padilla found a much different place than she’d remembered. Her team needed to work separately to assemble the paper, which was moved entirely online. That meant no newsroom, no-face-to-face contact, and no place to work and grow as a team.

“What kept me going was seeing everyone take their writing and reporting so seriously, starting the first week we came back,” Padilla says. “That took me back to the newsroom. That made me feel like, OK—this won’t be a regular year, but I have to stop being angry and keep being a leader.”

This semester, Padilla has led the newspaper in several new directions. She’s placed a greater emphasis on brainstorming with all members of her staff—meaning anyone, not just editors, can attend traditional story idea meetings to pitch ideas for articles. Her editorial team keeps in touch with writers through regular Zoom calls, and the staff has gotten together for virtual movie nights. Her team even wears special-ordered Trinitonian masks while on campus.

For a campus that feels all over the place—split up by distancing and geography, social and political differences, academic stresses and more—Padilla says the Trinitonian remains a place for Trinity’s student community to come together.

“This paper,” Padilla says, “is where your writing can let others know they aren’t the only ones struggling. That there’s a community out there that supports and understands them.”