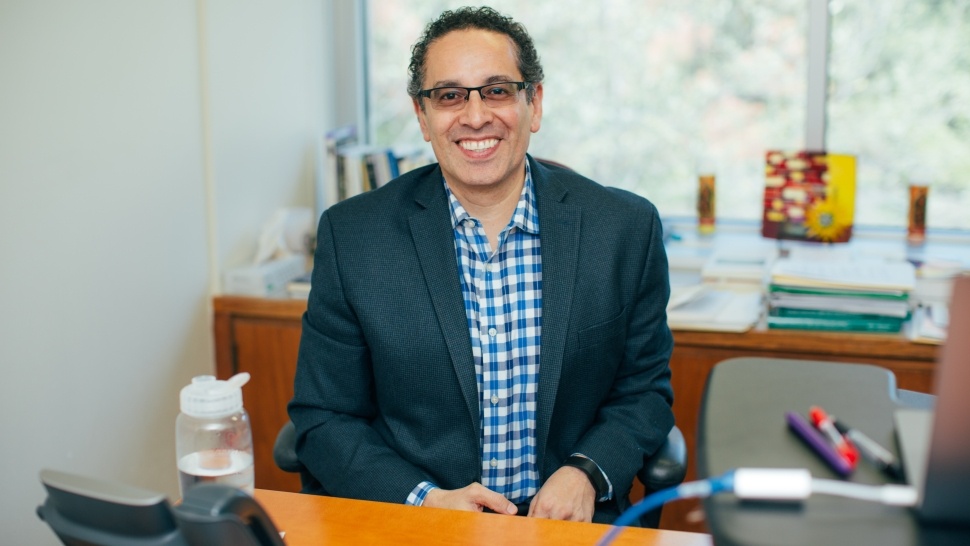 With more than 25 years of experience in building communities, formulating governmental policy, and developing leaders, Juan Sepúlveda has been named the Visiting Radford Professor of Practice in Urban Education at Trinity University.

Sepúlveda, who most recently was senior vice president of station services and system leadership at PBS, is teaching an undergraduate seminar on urban education and a graduate level class on community building. He expects his role at Trinity to expand into connecting the University more broadly with San Antonio and across the nation while serving as a community engagement and leadership development partner and resource. He arrived on campus in January.

"Juan Sepúlveda has dedicated his career to helping community-focused organizations engage more effectively in their work," said Deneese Jones, vice president for Academic Affairs. "His role at Trinity will help bridge the gap between the campus and the San Antonio community, a key element of the Trinity Tomorrow strategic plan."

Sepúlveda noted that part of Trinity’s early roots were focused on serving the San Antonio community. “That was part of the original mission,” he said. “We are reclaiming it, saying we are going to do more of it, but the community has to be part of the conversation. We want to co-create our community engagement work with the community. We see them as our partners.”

Based upon conversations with Jones and Trinity president Danny Anderson, Sepúlveda said he is prepared to share his experience of “deep work in the community” and leadership development with Latino communities as well as other groups and to embrace relationships with the community.

He holds degrees from Harvard, Oxford, and Stanford Law—and was the third Latino ever awarded a Rhodes Scholarship—and was Texas state director of the Obama for America campaign in 2008. Sepúlveda later worked in the Obama administration as executive director for the White House Initiative on Educational Excellence for Hispanics and in the political realm as a senior adviser for Hispanic Affairs for the Democratic National Committee during the 2012 re-election campaign for President Obama.

Before that, Sepúlveda helped establish The Common Enterprise, an outgrowth of a national Rockefeller Foundation initiative, to help build stronger communities across America by making nonprofits, philanthropic organizations, governments, businesses, and communities more effective as they tackle their toughest community challenges. The focus of the work was the interplay of politics, policy, practice, process, and applying innovative problem-solving approaches and solutions to each community’s toughest issues. Through this work, he first developed a partnership with Trinity, and overall worked in more than 35 states and nationally.

Sepúlveda is the author of The Life and Times of Willie Velasquez: Su Voto Es Su Voz, as a result of his work in the 1980s with the iconic founder of the Southwest Voter Registration and Education Project to advocate for voting and voter registration as the way to fight for justice for Latinos. He met Velasquez while a Harvard freshman and credits Velasquez for introducing him to community organizing.

Though he enjoyed his work at PBS, where he collaborated with more than 160 PBS stations across the country to strengthen their connections to their local communities and to each other as a national public media network, he is excited “to come home” to San Antonio, where he has lived most of his adult life, to help Trinity strengthen and expand its community engagement work.