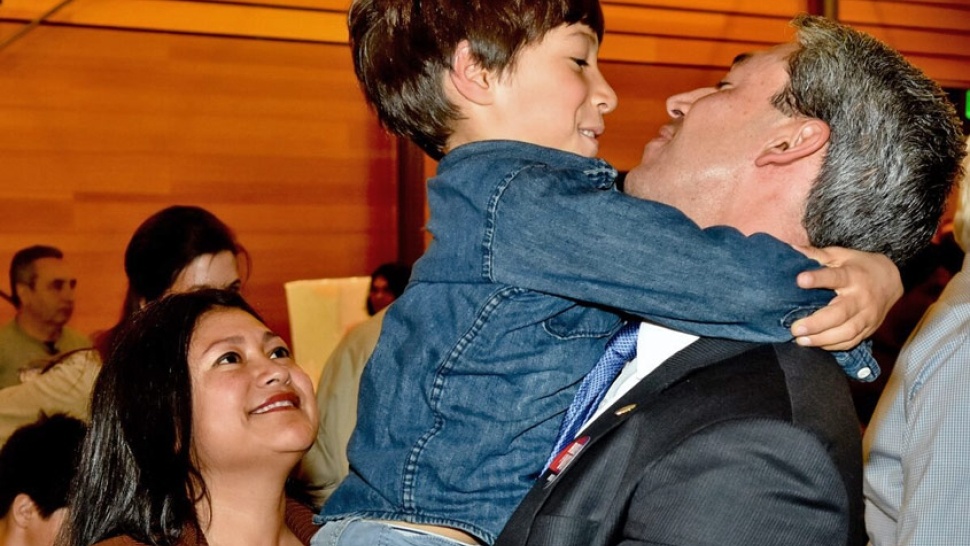 A City For All
Trinity graduate Ron Nirenberg believes in the future of San Antonio
Carlos Anchondo '14
Tuesday, March 28, 2017

Once a year on Opening Day, Ron Nirenberg ’99 takes his eight-year-old son, Jonah, out of school. Monday, April 3, will be no different. Nirenberg, born in Boston yet raised in Austin, once aspired to become a beat writer covering the Boston Red Sox. A love for baseball is just one thing the District 8 Councilman hopes to pass on to his son. He also hopes to pass on a better, brighter San Antonio for Jonah and future generations.

This is the inspiration behind Nirenberg’s “the city you deserve” slogan. If elected mayor in May, he plans to make San Antonio a “great American city” that all citizens can be proud of, no matter where they live or work. In Nirenberg’s eyes, San Antonio should be a city that people would choose even if they could live anywhere in the world. It is a city Nirenberg has chosen twice, first when he moved to San Antonio in 1995 to attend Trinity University and again in 2009 after working for The Annenberg Public Policy Center at the University of Pennsylvania. Nirenberg graduated from the Annenberg School for Communication in 2001.

“I believe strongly in the future of our city, the future of this country, and what our role is as a public and as public representatives,” says Nirenberg. “There is no better place to be right now, if you have that perspective, than the city of San Antonio.”

At his Broadway campaign office across from Maverick Park, Nirenberg sits in what was once a car salesman’s office. Dressed in a suit and tie, he leans back in his chair and thinks. This is not his first interview of the day, and probably not his last, but he takes it seriously, weighing his words carefully. Salt-and-pepper hair frames his face and his hands gesture as he searches for the right words to accurately describe his passion for San Antonio.

Nirenberg contemplates his chief competitor, Mayor Ivy Taylor, for whom he says he had great hope after she replaced Julián Castro. Yet, in the years following her 2014 appointment, Nirenberg believes San Antonio has gone from a city-on-the-rise to a city without momentum. “Complacent and stagnant leadership,” he says, is something he cannot abide.

“As a councilman, I have been very proud to be a champion for good governance, ethics, and transparency,” says Nirenberg. “I believe in government that listens to you and is accountable to all whom it serves.”

Among his major accomplishments, Nirenberg notes his time as chairman of the SA Tomorrow planning committee, his fight to protect sensitive land over the Edwards Aquifer Recharge Zone and the nearby Bracken Bat Cave, and his push for renewal of the Howard W. Peak Greenway Trails System. A page titled Progress on his campaign website details key highlights since he was first elected to council in 2013. Humorously citing his own “character flaw,” Nirenberg says it’s difficult for him to enumerate his accomplishments because, by nature, he is oriented to look toward the future and work still to be done.

Public service was not always in Nirenberg’s plan. When he first arrived at Trinity, Nirenberg sought to become a print journalist and fulfill his dream of covering the Red Sox. He “begged” his way into a first-year seminar taught by communication professor Robert Huesca about the intersection of sports and American culture. Through that seminar, Nirenberg was inspired to become a communication major. He also got involved with the Trinitonian, the student-run campus newspaper, where we would serve as a sports writer, sports editor, and the editor-in-chief before graduation.

“I loved it,” says Nirenberg. “I learned a lot about myself and my philosophy of transparency and ethics at the Trinitonian. In terms of my respect for the institution of government and the role of the press as a watchdog – that was certainly formed at Trinity.”

In his run for mayor, Nirenberg says his experience as a student-journalist influences the way his campaign interacts with the media. He respects the station of journalists and calls it “dismaying” the way the press has been denigrated in recent years. Nirenberg’s team supports the autonomy of journalists and works to always take their calls and questions.

Before running for city council, Nirenberg was the general manager for KRTU-FM 91.7, Trinity University’s jazz radio station. In addition to managing personnel, strategy, and operations, Nirenberg developed the station’s Year of Jazz and launched KRTU’s first integrated marketing campaign. The Year of Jazz brought together more than 20 local nonprofits for joint programming. Nirenberg says the station, where he once hosted a classic rock show as a student, helped reintroduce him to San Antonio and develop deep community connections.

With Election Day, May 6, just over a month away, Nirenberg is optimistic about his odds and energized by conversations with San Antonians. At the March 6 mayoral debate held in Trinity’s Laurie Auditorium, Nirenberg said his top priority for San Antonio would be civic participation. He encourages Trinity students to get involved in the city, to volunteer, and learn about different parts of town. Nirenberg says his decision to enter the mayoral race was motivated by his own community involvement, his family, and wanting to lead the change he wished to see.

The portal for that, in large part, was Trinity.

“Trinity is such an important place in my life,” says Nirenberg. “It brought me to San Antonio. When I was working at Trinity, I discovered my passion in life, which is public service. I entered a pretty naïve 18-year-old and I left inspired about the world with a good sense of ethics, integrity, and the intellect required to do well.”

The views expressed in this article are the views of the candidate and not of Trinity University. The University does not endorse or oppose any candidate in connection with this or any other political campaign or election.