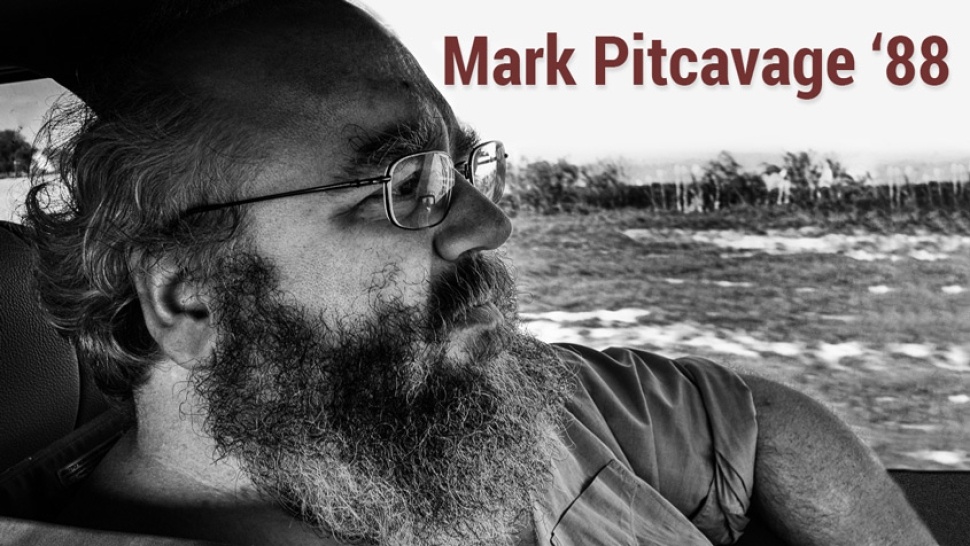 Mark Pitcavage ’88 has worked for the Anti-Defamation League (ADL) for 17 years. As a senior research fellow in the ADL’s Center on Extremism, Mark researches and monitors domestic terrorism and extremism, particularly the right-wing variety. Each day, Mark and his colleagues dedicate themselves to fighting all forms of hate and bigotry, and work with law enforcement officials to create a safer United States. Trinity caught up with Mark to learn more about his role and why it gives him purpose.

Q: Can you describe your work with the ADL?

A: The Anti-Defamation League is one of the country’s oldest civil rights organizations. We are one of the leading U.S. organizations dedicated to fighting hate and extremism. I monitor a variety of extremist movements and work with law enforcement to combat the evils extremists cause. I am also interested in comparisons between different types of extremist movements to see the similarities and patterns these people share.

Q: What are the methods you use to monitor extremism?

A: The “good” thing about extremists is they want to change the world to fit their own social or political goals, and you cannot do that sitting on your thumbs. You have to put yourself out there to change hearts and minds, to scare enemies, or gather recruits. Any way that extremists provide information about themselves, we try and look at it. Whenever possible, we use that information to combat some of the ills that extremist movements can cause.

Q: How do you help prevent future attacks?

A: With the information we receive, sometimes we observe a development or trend and we will warn the general public about it and make them aware. We may also provide investigative assistance to law enforcement officers. From time to time, we have helped put extremists behind bars and helped law enforcement to be more effective when dealing with extremism.

Q: What is it like to be consistently exposed to extremist activity?

A: Dealing with extremism and terrorism is a dark subject. Not everybody has the personality that is cut out for this work. For me, three things help get me along. The first is intellectual curiosity. I am always learning about something, a new movement or group, or about terrorism or extremism in general. There are always new things to explore. The second thing is that I feel like I am helping with something. I feel like I am contributing to making the world today a better place, the world tomorrow a better place, in an immediate sort of way. Lastly, you need a sense of perspective and a sense of humor so that you can distance yourself when needed and keep things in perspective.

Q: We are in an era of fake news. What are your thoughts on the subject and how does it affect your work?

A: I was actually one of the first people to write about this phenomenon before people had settled on a term to describe it. I wrote a piece titled Bloodlust: Viral News and Calls for the Death of the President in which I came across a disturbing number of calls for the death of Barack Obama, from both extremists and non-extremists. I discovered fake news was becoming a real problem in 2015. I observed that fake news articles were so inciting, making up all of these different things Barack Obama did, that people, even 65-year-old grandmothers, were talking in visceral terms about how Obama should be killed. The bottom line is fake news has a lot of effects in motivating people to hatred, paranoia, and suspicion. That is true for extremists, but it can also be true for non-extremists, too.

Q: Is there a simple way to identify fake news?

A: A simple rule of thumb is that the more you want to believe something is true, the more critical you need to be about that thing. Every now and then on social media, I see shared posts from my friends that are clearly fake news. Yet because the sentiment in that meme, post, or link is so compatible with views of the person who saw it, they did not engage any of their critical faculties and shared it with all of their friends. It troubles me that nobody is bothering to look through the façade of conspiracy and falseness that has been erected. People are happy with that façade because it confirms prejudices or beliefs they already had.

Q: You majored in communication and history at Trinity. How do you use those majors in your current work?

A: A lot of the methodology and analytical skills I developed as a historian are directly of use to me day-in and day-out with the work I do in contemporary history. Contemporary history is history that has just happened or is currently happening. In terms of usefulness, Trinity gave me an extremely well-rounded education. Whether I understand this reference, this analogy, or have this perspective, I know that Trinity provided a very solid foundation for everything that I have built on in the decades since I left. I wasn’t even paid to say that.

Originally from El Paso, Texas, Mark Pitcavage graduated in 1988 with double majors in history and communication. He earned a master’s and Ph.D. in history from The Ohio State University and now resides in Columbus, Ohio.