Jane Childers, Ph.D., professor of psychology at Trinity University, is the 2022 recipient of the Dr. and Mrs. Z.T. Scott Faculty Fellowship, Trinity’s most prestigious faculty award.

Childers, now entering her 22nd year at Trinity, has established an outstanding track record in developmental psychology research as well as teaching and mentoring students—both in her classroom and in her lab. Childers’ area of expertise focuses on the development of children ages 2-5, specifically on how they learn verbs.

“This is the best life, to spend all day just thinking about children and how they learn and grow up, how they think about gender, race, and peers and language, and all sorts of things,” says Childers, whose lab gives her undergraduate researchers an invaluable chance to work directly with daycares. 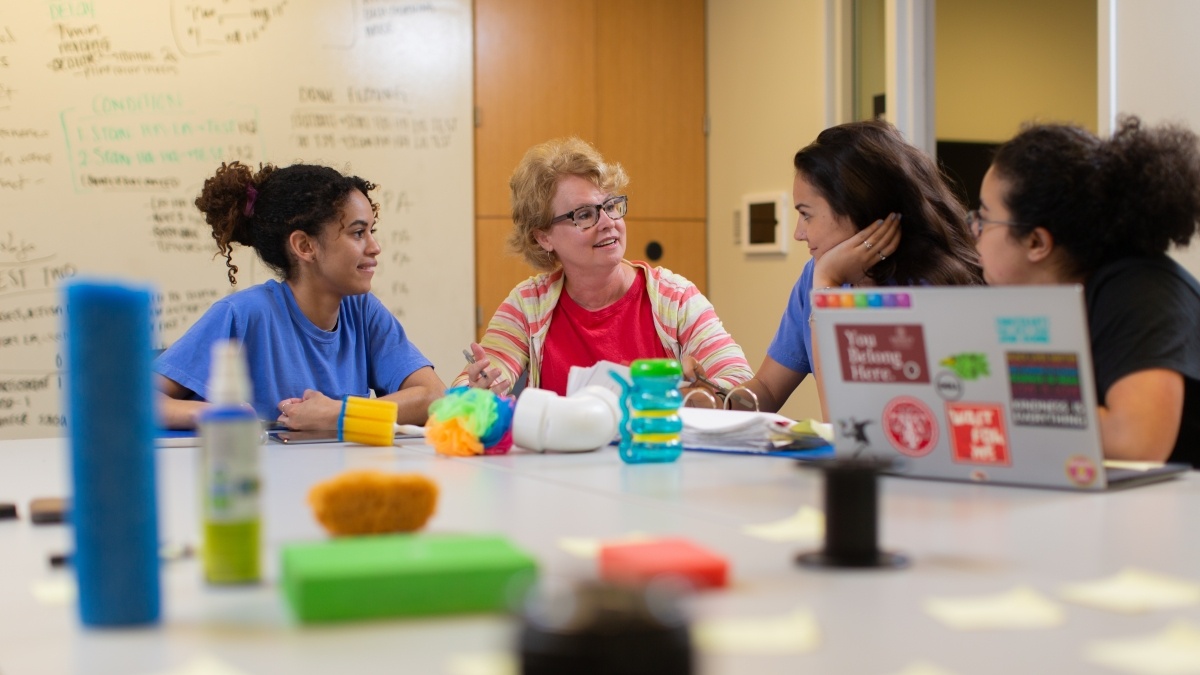 The child of a linguist, Childers says she was always struck by opportunities to observe children in their formative stages, especially through the lens of language. But Childers wanted to do more than understand language development—she wanted her research to have an active impact. “I was really interested in why, if language is innate, why some kids were learning language and some kids seemed to be lagging behind.”

Childers started at Trinity as a visiting assistant professor in 2000, hoping she’d get the chance to rise to tenure track: “It’s kind of rare that that might work out, but it did,” she says. Making a name for herself as a dedicated mentor and researcher—as well as teaching a popular set of developmental psychology courses—Childers rose to full professor in the psychology department in 2002.

Childers’ lab gives her dedicated team of undergraduate researchers the chance to run multiple studies during the semester.

“We do a lot of studies in my lab where we show children three events, and we teach them new verbs for actions they've never seen before. And we're studying what those mental processes are that they're using to compare the events to each other, varying different conditions to test different research questions in this world of verbs” Childers says. “Right now, our main site is working with the Will Smith Zoo School. Day to day, our researchers walk over there, play, and just get to know the kids. We're actually running four different studies with them right now, because it can be hard to find families [for this type of research]. So we try to get multiple data points from each family.”

These studies also are opportunities for Childers’ team to launch international collaborations with other researchers and universities. “Our lab has been doing these types of studies for a long time,” Childers explains, “but what's new now is that we're collaborating a lot more. I look around and in science, collaborations are a lot more prevalent now. And I think they're more fun that way.”

For example, Childers’ team has a current collaboration with a Japanese verb researcher and her students, questioning whether Japanese-speaking children learn verbs more effectively when presented with a set of events to compare to each other. There’s another ongoing study with a researcher and her students in Calgary, Canada, testing nouns versus verbs. “And then,” Childers laughs, “Just a bit more mundane: Boca Raton, Florida (for an adult event study), and Montclair State in New Jersey, where we’re working together to study spatial verbs, like ‘dangle, purge, hoist.’ And in all of these partnerships, it's been really fun, even during COVID, to work with other scientists as we've adapted our procedures to be used on Zoom.”

As excited as Childers is to work on these collaborations, she’s even more thrilled at the prospect of working with the undergraduates in her classroom and in her lab.

“Trinity undergraduates are so amazing. When I read articles about other faculty, they're saying the same thing and I agree with everyone: we just have great students,” Childers says. “I have fun training new students in the lab …because usually I then get to have them multiple semesters. They start off at a low level, they're doing all the coding and collecting data. And as they stay in the lab, I can move them up to supervise other undergrads. And it's just such a neat thing to watch a student do, move from being a sophomore, then a junior, up to being a senior.” Piper Swearengin ’23 is one of Childers’ students who followed that exact progression. Now a psychology major and education minor who plans to pursue a career in school psychology, Swearengin initially took a language development class with Childers as a sophomore, then instantly knew she wanted to be in Childers’ lab.

“She focuses on the student both in her lab and in her classroom,” Swearengin says. “She encourages student input, asks us what we think of the articles we read, asks us about our ideas. To hear someone care about our opinions, that means a lot.”

So, Swearengin started in the lab performing small tasks. She advanced to the point of running studies herself, then eventually progressed to analyzing more data and assuming more responsibilities. “[Childers] doesn’t just throw everything at you at once—she lets you grow, and when you’re ready, gives you more opportunities.” Childers eventually took Swearengin to the Cognitive Development Society conference this year to present the group’s research. “That was a huge opportunity—I was so excited,” Swearengin says. “The stuff we do is stuff graduate students do. The conference we went to, we were just about the only undergrads there. Having your name be a co-author on papers is just really neat.”

“Piper blended right in with the grad students,” Childers adds. “It's just neat to see these students grow from where they started off, unsure of how to do research.”

Swearengin says Childers has a very simple approach to creating an environment where her students can grow: “In research across the board, so many professors are about publications— how many can we get? But while that is important in our lab, that’s not really Dr. Childers’ main focus—the main focus in her lab is teaching students to do research. That takes so much of the pressure off our environment, to know that you’re not always going to get significant data you can publish, and that’s OK.”

True to her inspiration, Childers also emphasizes real-world applications for the material her psychology students engage with on a daily basis.

Across her classes in language development, social development, and cognitive development, Childers likes to venture beyond her typical lecture and research discussions. “What I've started to do recently is have a day where my students have what’s called an ‘intervention day.’ So let’s say you've learned all this stuff about gender or racial stereotyping. Now, let's have a day where you work in a group and you design an intervention that's empirically supported, that you could then use in a school or a daycare, or with an individual family to work on these issues.

“And it's really fun to do that kind of day,” Childers says. “It's a way to make the material more real and mentor our students toward this notion that our class isn't just what you're learning right now. But that this is something you could do when you grow up—you could use this in your community.”