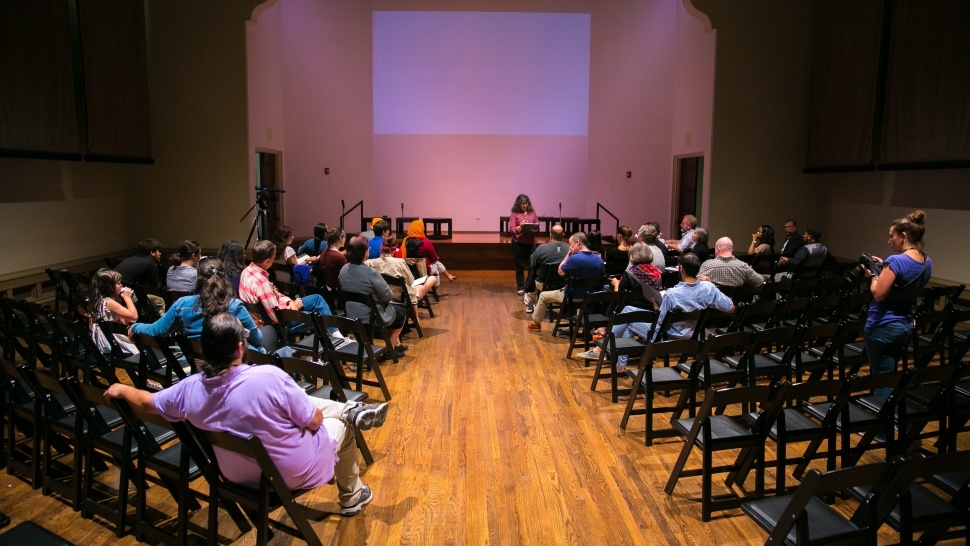 "A lot has been said about Islam during the presidential election: What have you heard?”

It’s a straightforward question, but imagine asking this to your neighbors, religious community, or even your family members, right in the middle of a contentious American electoral season.

Daunting as it may seem, a team of Trinity professors has spent the past year pulling more than 170 San Antonians’ responses to this question into one place, first as a summer 2016 research project, and now as a 70-minute play, To Be Honest. According to Trinity first-year experience instructor Habiba Noor, one of the playwrights, the production transforms the isolated voices and opinions of real-life San Antonio residents into an incisive, intersectional dialogue about Islam, all in the context of the heated 2016 presidential campaign.

“During our research, we realized that our team was an audience for a larger conversation about Islam that our interviewees didn’t realize they were a part of,” Noor says. “Each interviewee was speaking freely and honestly with us, but they couldn’t hear each other. And the things we were hearing were unbelievable, but they were also private. So the play—which still protects the anonymity of our participants—acts as a bridge between these private discussions and the public.”

While the team—comprised of Noor, sociology professor Sarah Beth Kaufman, and communication professor William Christ—bills To Be Honest as a play, the work is wholly comprised of verbatim responses from research participants. Described by Christ as a form of “reader’s theater,” the production introduces more than 20 characters spread throughout 18 topical episodes, all exploring issues such as immigration, social media, clothing, and treatment of religious groups such as Sikhs. 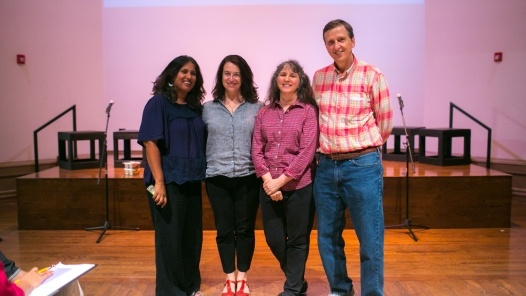 Each character represents a real-life interviewee, though names have been changed to ensure the privacy of those involved in the research.

These figures range from Christians, Sikhs, and members of the Jewish and Muslim communities to a military veteran. Ever-tethered to reality, the production even opens with a December 2015 video of then-longshot presidential candidate Donald Trump calling for a ban on Muslim immigrants during a campaign rally.

“That was our lightning rod moment,” Noor says. “That rally was the moment we knew we wanted to find out how people here in San Antonio were responding to what was being said about Islam in the news, online, and across all media.”

Trump, in the months following his December 2015 speech, would go on to regularly propose an immigration ban on several primarily Muslim countries as part of his campaign. As president, Trump has enacted multiple executive orders on this issue, with several being struck down in Federal court. This legal debate has extended to a review by the U.S Supreme Court, too.

Amidst this political climate, Noor, Christ, and Kaufman undertook the research project that would later transform into To Be Honest. After crafting a proposal to Trinity’s Mellon Initiative in early 2016, the team secured a grant and brought on four undergraduate researchers, Hanna Niner ’17, Savannah Wagner ’17, Iris Baughman ’17, and Matthew Long ’19, for a period of summer research. The team worked to identify local groups from across San Antonio’s social, political, and religious spectrum, seeking out leaders of mosques, churches, synagogues, and other sects.

The goal of the research project, simply put, was to find out what these different populations of the city thought about Islam during the 2016 presidential campaign. In total, the group received significant responses from more than 170 participants, with the latest answers coming during the heat of the political season in September 2016.

“We realized that we were hitting some nerves,” Christ says. “So, we were grateful that respondents were willing to open up to us.”

The four student researchers, says Kaufman, were instrumental in helping the team draw candid answers out of respondents. 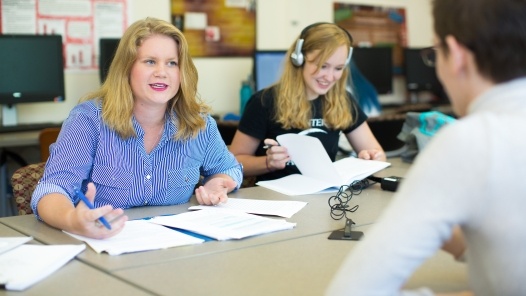 “When people talked to our student researchers, they felt comfortable,” Kaufman notes. “And that’s part of good social science research; sometimes as a researcher, you have to stop playing it ‘cool,’ and reveal your ignorance. You say, ‘No, I don’t know anything about this—could you explain it?’ When that happens, the person you’re interviewing goes from feeling defensive about their views to actually explaining themselves.”

While each of the students and faculty researchers focused on different groups in San Antonio, Niner faced what she called a “challenging” assignment of talking to Evangelical Christians and conservative groups—some of whom expressed less-than-favorable views of Islam and the Muslim community during the interview process.

“There were some of my interviews where you can ‘feel the love,’ but also others where you just felt the hatred,” Niner said. “A lot of people assumed, because I’m white and I give off a bit of a ‘vibe’ of being from a southern, Christian area, that I would just agree with them when they talked about things like Muslims ‘all being terrorists,’ or how ‘Muslims were the first to attack European ships off the coast of Africa.’”

“People would just say these things,” Niner continues, “then look at me and ask, affirmatively, ‘You know?’ And the whole time, I’d be thinking, ‘No, I don’t?’”

In tandem with the students, Christ sought out answers from Unitarian Universalist and Sikh groups, among others, while Kaufman and Noor, members of the Jewish and Muslim communities, respectively, did much of the heavy lifting within those networks.

“Members of the Muslim community, it seems, are so often ‘performing a script’ when they talk to journalists, where they are always on the defensive, having to defend their beliefs,” Noor explains. “But when you’re able to hear them speaking openly, to hear their frustrations, that’s a different conversation.” 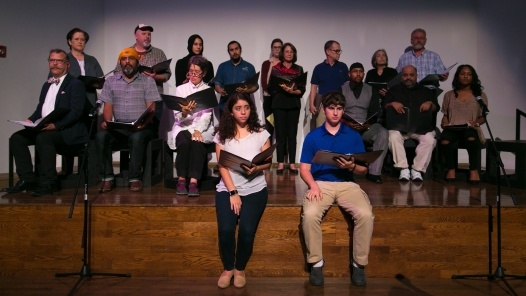 Members of the cast perform at a dress rehearsal of To Be Honest before their debut performance at the McNay Art Museum in September.

As Christ, Kaufman, and Noor started reviewing their research, they saw the potential to transform these “unscripted” responses into a script for a play.

“One of the first things I thought, when seeing some of the responses to the research, was that we needed to be sharing this,” Noor says. “And we realized, almost as soon as we started reviewing our research together, that these words would be powerful if presented verbatim on stage.”

At first, the group explored the idea of creating a podcast or alternative presentation method for the research. But the group settled on a play format after noticing parallels between their research and Tectonic Theatre’s The Laramie Project (2000), a play depicting community reactions to the murder of Matthew Shepard, a gay student at the University of Wyoming. Shepard was murdered in 1998 before the state of Wyoming had any hate crime laws. Influences from that play, which presents interviews in a multimedia format known as “verbatim” or “documentary” theater, are present in To Be Honest.

For the trio of Kaufman, Christ, and Noor, bringing their research into the spotlight has been a long, painstakingly-crafted process. The team has workshopped the play three times, with each performance honing the production toward its current format.

The first performance of the script, which opened in Trinity’s Attic Theater in December 2016, was a loosely-structured but emotional experience; about 23 actors sat in chairs, reading their characters’ words aloud. Afterward, cast and audience members were invited to respond.

The second reading, done at the Episcopal Church of Reconciliation, saw the play split into smaller, topical episodes, while some characters took on a heavier focus, with a select few developing a more conventional, linear narrative. A formal ‘talk-back’ followed, which informed the playwrights’ third draft. The final workshop performance, presented in the Attic Theater in May 2017, was fully staged with lights, sound, and projections, and closed with a reception where the audience could interact with the authors,
cast, and crew.

As Kaufman, Noor, and Christ wrote and continued to refine the script, they brought on theatre professor Stacey Connelly to help make the challenging jump from script to production. In addition to offering some advice on the play’s narrative structure, Connelly assumed directing duties and pulled together an ensemble just as unique and intersectional as the 170 people who responded to the research project. To accomplish this feat, Connelly cast an array of students, faculty, alumni, and professional actors from San Antonio’s theater community. 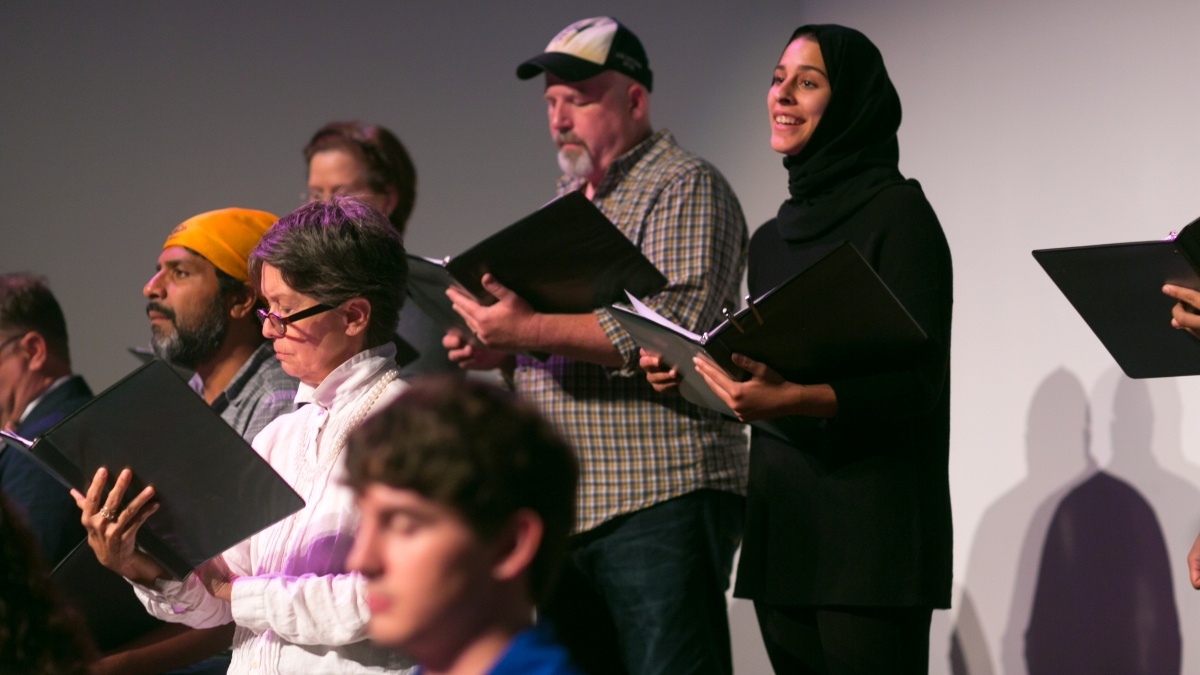 “It’s been wonderful, challenging, and exciting to work with such a diverse cast,” she says.

“And they understand the script, the characters, because these are real words coming from real people.”

Some actors in the play, Noor notes, connected with familiar words and views right away.

“One student actor, who plays an older Sikh man, started going through his lines, stopped, and said, ‘This could be my father,’” she recalls. “People were instantly relating to these characters.”

While other actors faced the challenge of portraying unfamiliar viewpoints, the entire cast was united by the truth behind the script.

“Acting like this isn’t impersonation,” Connelly says. “Our cast are speaking verbatim testimony; they are channeling these characters.”

This honesty led the group to the title of the play itself.

“We found, as we conducted more and more interviews, that this phrase, ‘to be honest,’ kept appearing in the conversation right before people started transitioning from their scripted, ‘interview mode,’ to being more open with you,” Noor says. “They’d pause, tell you, ‘to be honest’...”

Noor’s voice trails off pointedly, while Kaufman nods in agreement.

“When people say, ‘to be honest...,’ that’s the moment of the interview where that bridge from public speaking and private conversation forms,” Kaufman says. “That’s the moment when people revealed how they really felt.”

Audiences and critics alike have responded well to that openness so far, according to the team. Viewers, ranging from fellow Trinity professors and students to other San Antonio citizens, have suggested that the team take the play on a national circuit. But for now, the group is focused on spreading word about To Be Honest in San Antonio.

The play ran in September 2017 in front of a packed house at the McNay Art Museum in partnership with Texas Public Radio’s Dare To Listen campaign and funded in part with a grant from Humanities Texas, the state affiliate of the National Endowment for the Humanities. The group hosted a roundtable discussion following the performance, with the viewers and actors participating, too. The performance was also part of Trinity’s Alumni Weekend in October.

For viewers who haven’t yet seen the performance, Noor won’t divulge any spoilers, but she does allude to some unexpected revelations.

“Some characters in the play will surprise you,” Noor says. “You might start out assuming things about them, only to hear them say some-thing else.”

In the end, that’s the real power behind To Be Honest, Kaufman says.

“There’s real nuance and subtlety here,” she says of the play, “and you find out that you can’t put anybody, any of these characters, in a box.”