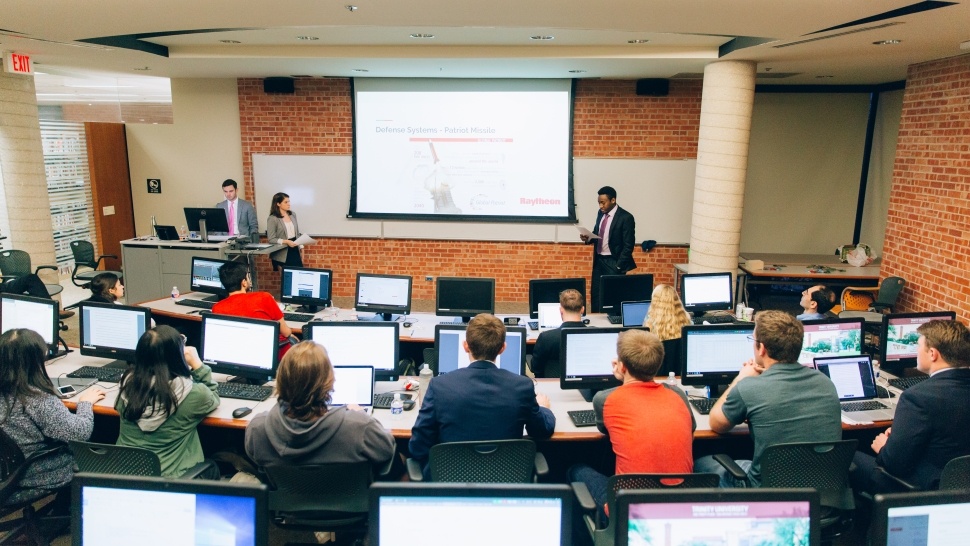 For the Trinity seniors who run the University’s Student Managed Fund, there’s more than nine million dollars on the line.

But if you’re a finance major at Trinity’s AACSB-accredited School of Business, this is the type of high-stakes decision-making that class after class of aspiring analysts and investors have signed up for. It’s a lean, mean, highly-selective team of about 20 Trinity finance students, coming together to manage a diverse portfolio of investments. This is real money, with real stakes, run by real students: since its founding in 2000, Trinity students have grown the Student-Managed Fund (SMF) from its original $1,000,000 seed into a portfolio of more than $9,000,000.

The SMF is an experience that seniors such as Michael Edmonson ’21 have been waiting for their entire lives. 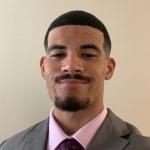 Edmonson, a finance major from Holly Lake Ranch, Texas, says that “since I was a little kid, I wanted to study finance. All the movies I watched, you’d see these dudes walking around talking about money, numbers, and I just enjoyed numbers. Numbers came easy to me, and I felt that if you have a finance degree, you can pretty much do whatever you want.” 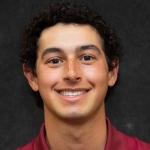 “From a young age, I started investing. It was obviously small money, but it was fun for me to pick companies that I liked growing up. Another reason I chose to be a finance major was because of impactful individuals around me who inspired me to understand investments and the importance of understanding a business.”

Or Thomas Kasierski ’21, a finance major from Jacksonville, Florida. 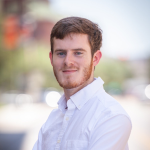 He came to Trinity interested in English and economics but has had an interest in finance ever since his family gave him a book on personal finance as an 11-year old. “I like digging into digits, and navigating the actual systems economics was talking about.”

Kasierski says finance at Trinity has been “everything it was advertised. Our classes are super interesting and mathematical. I got pushed into this whole new world. It has you constantly thinking about what that ‘next level’ of your studies looks like. I kept asking my professors, ‘How do I take finance farther and farther?’”

For any Trinity finance major wondering what that “next level” is, the SMF is the answer.

“This is Mt. Everest of the finance major at Trinity,” Kasierski says. “Not everyone gets in, so the application process is stressful.”

That’s not to say there are frozen applicants, still clutching their climbing pickaxes, dangling off the side of the winding stairs to Pichler’s classroom, but the process does significantly weed out the field. Junior finance majors apply for an extremely selective team of about 20 slots, with just half of applicants, on average, making it in.

There’s a reason this class is in such high demand, Edmonson says.

“SMF is the peak of the finance major—it combines everything you do in previous classes like equity evaluation,” Edmonson explains. “This is a great way to deal with real-world problems,” he says. “In the real world, things go good, things go bad with the stock market, and you have to work with the money you have. This is like getting future job experience, but right here on Trinity’s campus.”

“This is real money on the line,” Pidgeon says. “Important decisions are being made, and this is such a meaningful way to learn how to create a strong investment strategy. Finance is not a perfect science; we must make informed decisions based on the resources we have and stick to our investment strategy.”

How does the SMF Work?

The SMF has evolved from its inception as a simple stock picking class in 2000 into a full-on investment management experience.

Over the course of two semesters, the team of 20 seniors covers a wide range of finance topics, becoming fully fluent in the language of finance, gaining experience in financial modeling, as well as managing multiple people and processes.

But the true draw of the class is the experience itself: the team actually applies the lessons to make real decisions about stocks within the SMF portfolio.

The class separates into pairs of “bears” and “bulls,” who conduct in-depth research into potential investments: the “bear” is responsible for arguing against investing in a company, and the “bull” argues in favor. Working through a series of stocks, every pair gets experience making financial presentations to the entire team, which then votes and works out a strategy for the entire multi-million-dollar portfolio.

Edmonson, for his part, drew the bear position for Costco—a company that’s benefitted more than most from the buy-everything mindset of the global pandemic.

“That was hard for me because I actually love Costco,” Edmonson laughs. “But all stocks have bear and bull cases. I had to go through the numbers, news articles, looking for the worst-case scenario, and that’s a valuable skill you still need to have.”

While Trinity’s SMF has a long-running track record of steady, consistent growth, Edmonson says the volatility of 2020’s markets injected some real-life stakes into the equation.

“At first, I noticed that everybody was kind of afraid to make decisions, because things could go really poorly,” he says. “But as we got more confident, I’d say everybody’s handled the pressure really well. We’ve only made slight tweaks to the portfolio, and that’s been successful so far.”

Faculty in the Field

Since the students run the SMF, it might be easy to overlook the valuable guidance that a professor like Pichler can offer the group.

“Professor Pichler has been an awesome mentor. I’ve been fortunate enough to take classes with him four semesters,” Pidgeon says. “He’s got a unique background because he wasn’t a teacher his whole career—he was the CFO at Rackspace, so he’s got real-world knowledge and experience that he can apply to our classroom. He is an extremely valuable asset to all of us.”

That’s life at Trinity, Pidgeon adds, where professors often have experienced great success in business and bring those insights into the classroom.

“I don’t think you could have better professors anywhere in the world, honestly,” he says. “They care about us, we have small classes, we all get feedback, we get to know each other on a personal level. Every professor I’ve had has made me a better version of myself in some way.”

Edmonson says Pichler also plays a huge role in making sure each student in the SMF gets pushed to perform their best.

“Pichler has helped everyone improve their report writing. He really takes time to read everybody’s work,” Edmonson says. “He’s not afraid to remind us that, ‘Hey, you guys are supposed to be the best of the finance major—you need to be able to produce the best work.”

Pichler, for his part, says he likes working with SMF undergraduates because it gives him the chance to cut bad habits out of the career field. 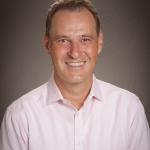 “There’s so many myths and untruths about investing. Many students come in with the idea that you can get rich quickly doing a little bit of work and betting on some stocks,” Pichler says. “And yet, we are at a university where we are supposed to look at the actual research, which consistently, for a century, tells us that none of the easy stuff works. One key objective of the SMF is to receive our students with this wide range of views and help them build a lasting mental framework that will turn them into better investors.”

Edmonson and Pidgeon can both attest to receiving this dose of reality.

“One of the misconceptions I had was that you always had to be an active investor to do well,” Edmonson says. “Growing up, all you see in the movies is people looking over numbers, making big moves—but often, you don’t necessarily have to do that, because passive investing is considered to be one of the better options for many people who don’t have hours and hours to sit behind a computer.”

“I thought I knew a lot before coming to the SMF,” Pidgeon adds, “but I still had plenty of room to grow my investment skills.”

All three seniors say their SMF experience has played a pivotal role in their personal growth.

Experience with financial forecasting, for example, has given Edmonson confidence in his most crucial investment: himself. “After all I’ve accomplished in SMF, I’m excited for the future. Everything I’ve done at Trinity is going to really help lead me into a great career.”

Edmonson has already completed an internship as a financial advisor. Now, he’s looking into financial analysis for a startup, or possibly working for a bank.

“I’d tell students coming into Trinity that the experience is going to be quite hard academically, but it’s going to be extremely fulfilling. You’re not going to get a better chance to make real-life, hard decisions than you are at Trinity’s SMF path.”

Pidgeon, who’s looking at going to work for a financial firm, says the SMF has taught him the importance of asking the right questions.

“Professor Pichler has taught me that when I have something to say, make it meaningful. If you don’t know something, leave it out. And make sure you take the extra step to understand and learn about what you don’t know.”

And as Kasierski moves into his new position as an analyst for business valuation company Mercer Capital—where he’ll also work towards CFA certification—he says there’s no better tool to have coming out of college than experience making actual decisions.

“At each job interview I’ve been to, the SMF is the first thing I get asked about, more than anything else,” Kasierski says. “This career field is so competitive, and the SMF is just such a difference-maker.”